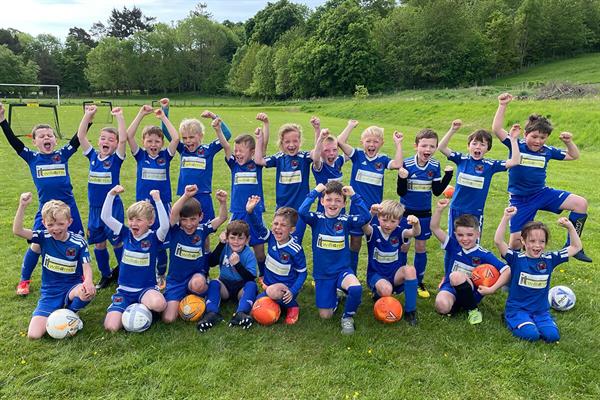 Footie fever is ramping up as the Lions head to the World Cup quarter finals. Here in the UK, the excitement for our One Million Keepy Uppy Challenge is building too.

With less than two weeks to go, we’re more than halfway to our goal, with team members pledging their keepy uppies and raising vital funds and awareness to help show brain tumours the red card.

Amongst them is the Ruthin Towns FC U8s team (pictured) which is tackling 2,000 keepy uppies. The team has raised more than £570 and its “keepy uppy chaos” was on Wales247.

Coach Becky Davies, who lost her dad John Williams to a brain tumour, said: “The kids are really getting into this challenge; they are having so much fun. The skill level varies so it’s usually absolute chaos with balls flying everywhere. It’s a mix of brilliant and hilarious.”

Football-mad brothers Zach, eight, and Harvey Taylor, 10, have raised nearly £900 from their challenge, which was on Yahoo! They pledged a combined 1,250 keepy uppies inspired by their beloved ‘Pops’ Colin Rothwell, who died from a glioblastoma (GBM) in 2019.

Players at South Cave Under 8s Blacks are also getting involved to support their teammate Jacob Binks. His mum Anna was diagnosed with a low-grade brain tumour 12 years ago and, last year, learned the disease had progressed. The team has received messages of encouragement Liverpool FC and Chelsea FC, and their efforts were featured on ITV Calendar.

There’s still time to add your keepy uppies to our total as the challenge runs until the final whistle is blown on Sunday 18th December. Click here to sign up. Then set up your fundraising page and, when you get your first donation, we’ll send you one of our special challenge medals.

If you found this news interesting or helpful, sign up to our weekly e-news and keep up to date with all the latest from Brain Tumour Research.