End the uncertainty for research and development 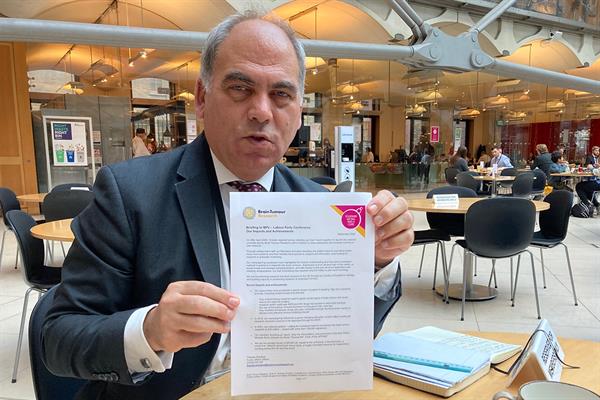 This week, Brain Tumour Research’s Policy and Public Affairs Officer Thomas Brayford met with Bambos Charalambous MP – the Shadow Minister for the Middle East and North Africa – to discuss some of the issues and challenges faced by researchers in the UK.

Many of our asks arose from the Brain Tumour Research fifth annual researcher workshop, which took place last week and saw nearly 50 researchers attending from our three Centres of Excellence. They told us about the common challenges they face recruiting internationally, the reduced pool of PhD students, clinicians, technicians and nurses, as well as the reduced access to EU grants.

The Shadow Minister said that the uncertainty with the UK’s participation in the EU’s Horizon programme for research and innovation was a “big concern”. Mr Charalambous also echoed much of what was said by Shadow Secretary of State for Business and Industrial Strategy, Jonathan Reynolds, at the Labour Party Conference, including that “a strong research sector underpins so many areas of society”.

Also discussed was the work of Mr Charalambous’ constituent David Taylor, who set up In Sue’s Name – a Member Charity of Brain Tumour Research – in memory of his daughter Susan Blasotta, who died from a glioblastoma (GBM) in January 2011. The charity is aiming to raise £1 million by 2027 to provide crucial research funds to support our Centre of Excellence at Queen Mary University of London.

Mr Charalambous also spoke about his personal connection to brain tumours and said that “finding a cure is vital”.

We hope Bambos and his colleagues will join us to raise awareness of this devastating disease by taking part in Wear a Christmas Hat Day on Friday 16th December.