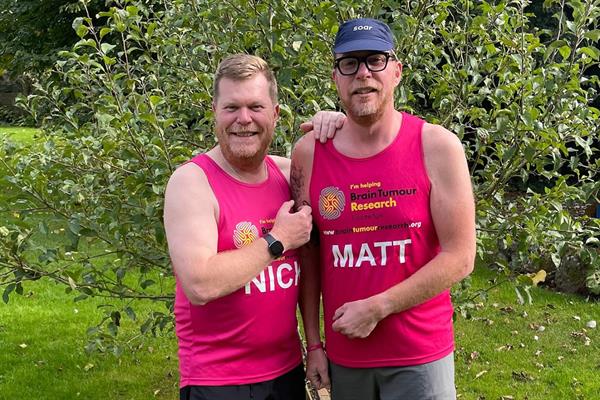 A brain tumour patient is lacing up for a half marathon challenge to help find a cure for the disease.

Nick Thomas is in the final stages of his training for the Oxford Half Marathon this Sunday (16th October). He is taking on the 13.1-mile run to raise vital funds for Brain Tumour Research after he was diagnosed with a brain tumour in 2013.

After losing vision in his left eye in 2012, Nick had multiple MRI scans which showed a swollen optic nerve with no further treatment and his vision returned six months later. A year later, Nick was refused travel insurance and told to go back to hospital as previous scans may have missed something.

It was then that he was told he had an inoperable 2.5cm mass on his brain.

In 2016, Nick had six weeks of radiotherapy after a routine scan showed the tumour – a low-grade meningioma – had grown. He is now scanned every two years and under the care of neurological consultant Jane Halliday, who was inspired by Nick to run the TCS London Marathon for Brain Tumour Research earlier this month.

Nick, pictured with his brother Matt with whom he completed the London Marathon in 2021, said: “We often forget the impact that our actions and words can have on the people around us. When Jane told me she had a place in the Brain Tumour Research team, I was overwhelmed with emotion. Running isn’t something that comes naturally to me and I have picked up a few injuries during my training so this will be a challenge for me.”