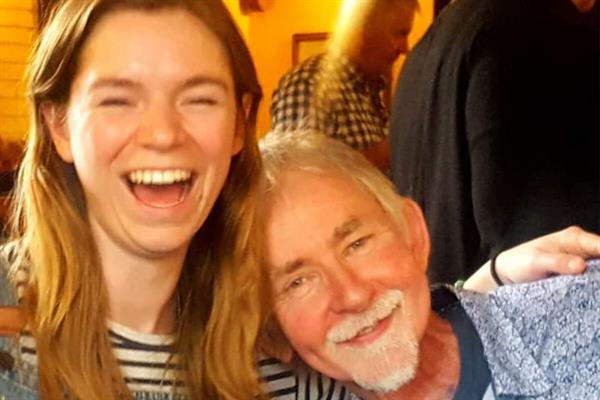 A young woman is preparing to run the TCS London Marathon for Brain Tumour Research after losing her stepfather to the disease.

Andrea Auburn will lace up for the famous 26.2-mile route on Sunday 2nd October. Her inspiration is her stepdad of more than 20 years, Brian Brewer, who was diagnosed with a brain tumour last September.

After suffering symptoms including dizziness, tinnitus and nausea, Brian was initially misdiagnosed with tinnitus, which was attributed to him having had radiotherapy for throat cancer 15 years prior. He underwent a biopsy and debulking surgery and it was revealed that he had a rare type of glioma in his frontal lobe known as gliosarcoma.

Brian received palliative care at home but spent his last three weeks in a hospice where he died in March, aged 65, just six months after receiving his diagnosis.

Andrea said: “Brian would have been the one texting me to ask how my Sunday runs were going. I think he’d be really proud that I’m doing this for him and when I’m running, I think about that.

“No one should have to go through what he did, the misdiagnosis and then the hopeless prognosis. His situation was so grave and that just shouldn’t be the case.

“I want other people to have options after their brain tumour diagnosis, which is why I’m supporting Brain Tumour Research. The thought of other people having to go through what Brian did is devastating.”