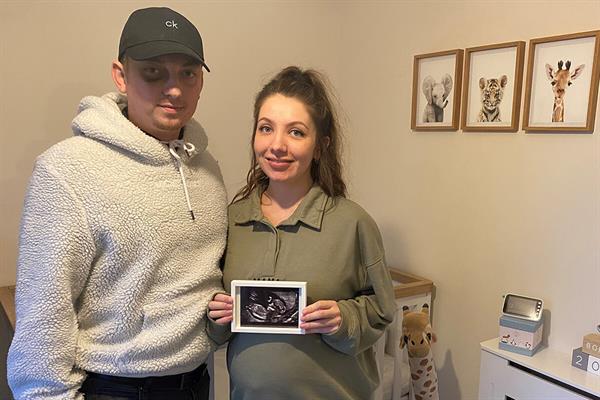 Brain Tumour Research supporter Adam Dilley, whose surgery was filmed for the BBC Two documentary, Surgeons: At the Edge of Life, will be on your TV screens tonight.

Adam, 30, was diagnosed with a brain tumour in October after an optician discovered a mass behind his left eye. The shock diagnosis came after Adam suffered from symptoms including headaches and blurred vision, which doctors misdiagnosed as sinusitis.

On 1st November, Adam underwent debulking surgery at Addenbrooke’s Hospital in Cambridge, which was filmed for the documentary. His surgeon Mr Alexis Joannides was able to remove most of the tumour, but biopsy results confirmed it was a grade 4 glioblastoma multiforme (GBM). Only 25% of GBM patients survive more than one year and just 5% survive more than five years.

The diagnosis was all the more devastating as it came just weeks before the due date of Adam and partner Tasha’s first child.

Before Adam’s surgery he was given 5-ALA, more commonly known as ‘pink drink’, which causes tumour cells to glow pink under ultraviolet light in the operating theatre, while healthy cells remain a normal colour.

Our spokesman Hugh Adams said: “It is thanks to the tireless awareness-raising efforts of the brain tumour community that the ‘pink drink’ used in Adam’s ground-breaking surgery is now being made widely available. Adam’s willingness to share his experience of brain surgery with a large audience is so inspiring and will help raise awareness about this devastating disease so that more people can support the vital research to improve treatments and, ultimately, find a cure.”

“Our thoughts are with Adam as he enters the next stage of his treatment and we wish him and Tasha all the best for the safe arrival of their baby boy.”

Watch Adam in Surgeons: At the Edge of Life on BBC Two tonight at 9pm.

You can also donate to a GoFundMe page, set up to support the couple financially following Adam’s diagnosis, here.