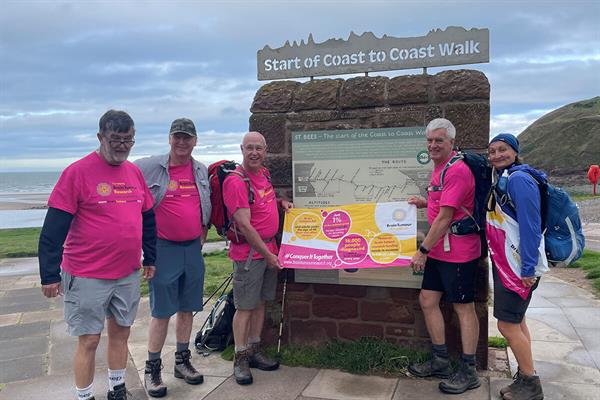 A loving father has kept his word to his dead son by carrying his ashes to a place they said they would visit together.

Bernard Crossey completed a 200-mile walk between the west and east coasts of Northern England on what is known as Wainwright’s Coast to Coast Walk. Part of a group of five, he has raised more than £12,000 for Brain Tumour Research.

Bernard’s fundraising comes after he lost his son, Sean, to a brain tumour. Sean Crossey died in September 2018, less than two years after being diagnosed with a grade 4 glioblastoma multiforme (GBM).

Sean took on the challenge himself in 2014, along with Bernard and Bernard’s colleague, Stuart Kent, but was unable to complete it because his feet were so badly blistered. He had vowed to return with his father but died before he was able to.

Instead, Bernard has carried his son’s ashes on the path he longed to see before he died. He was accompanied by Stuart and one of Stuart’s colleagues Leanda Mould, as well as Bernard’s fellow High Wycombe magistrate, Andy Hall, and brother, Mick Crossey. Others have taken part in smaller stints along the way.

Sean’s mum, Jo, who assisted the group as a support driver, said: “We feel we’re getting little messages from Sean every now and again to let us know he’s with us. Every time there’s a rainbow we associate it with Sean – they’re signs that he’s watching over us, and we’ve got a little urn with his ashes, as well as those interned at Greenacres burial site, so he’s come on the walk with us.”

To donate to support the group’s fundraising, please visit their JustGiving page here.