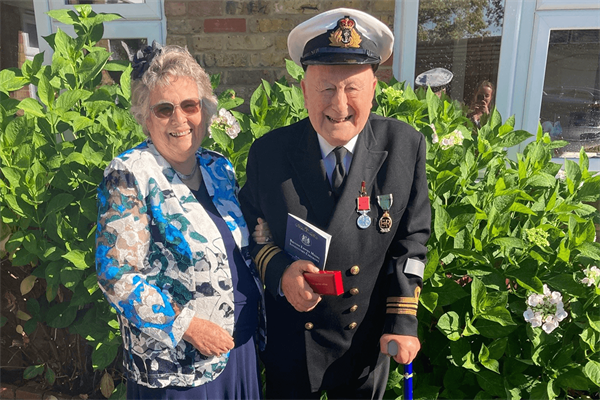 The Life President of Brain Tumour Research has been invested with the prestigious British Empire Medal (BEM).

Sandy Saunders was invested with the BEM by the Lord Lieutenant of Buckinghamshire, Countess Howe. He was accompanied by his wife Rosemary and daughters Cathy Smith and Jennie Grieve, granddaughter Susanna Grieve and grandson Harry Ford. Sandy was awarded the honour in last year’s Queen’s Birthday Honours List in recognition of his services to charity and community.

He said: “I feel very privileged. It’s a great honour and national recognition of all the dedicated work carried out by the entire team at Brain Tumour Research.”

Losing his eldest daughter, Diana Ford, to a brain tumour in 2002 led Sandy and his family to set up the Diana Ford Trust to fund research to find a cure for the disease. In 2008, the Diana Ford Trust re-registered as Brain Tumour Research to reflect the coming together of its four founding partners, using its cash deposits to provide seed-funding for the first stage of the new national charity’s funding and awareness campaign.

Sandy added: “It was especially touching to have Diana’s eldest son Harry with us on the day, and I am sure Diana would be very proud of what we have all achieved in her memory.”

Sue Farrington Smith MBE, our Chief Executive, said: “We are delighted that Sandy’s enormous contribution on so many levels has been recognised. All of us at Brain Tumour Research send our heartfelt congratulations to Sandy on this award which is hugely deserved.

“We will always be grateful to Sandy and the Diana Ford Trust for having the foresight to change their name to Brain Tumour Research, step down and enable representatives of charities that had come together under the Umbrella of the United Brain Tumour Campaign to become Trustees, including myself a Trustee of Ali’s Dream, Wendy Fulcher, Co-Founder of BTRC (Brain Tumour Research Campaign) and Nigel Boutwood, Founder of Charlie’s Challenge.”