Celebrations as crowdfunder hits £300,000 target to send teenager with DIPG to US for clinical trial 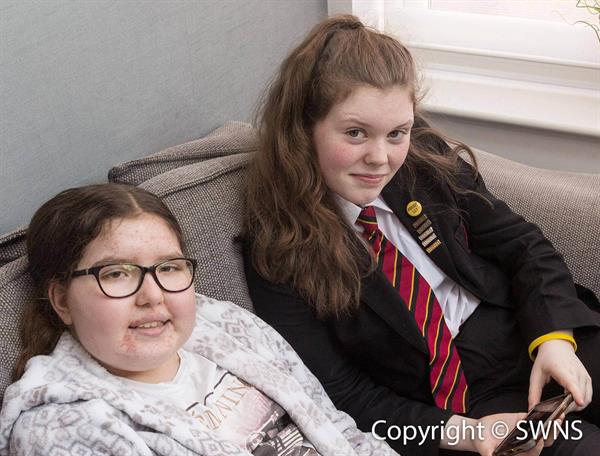 A teenager’s Facebook campaign to help a schoolfriend get last chance treatment for a brain tumour has raised £230,000 in just a week, bringing the total with crowdfunding to £300,000.

Thirteen-year-old Lillie Cotgrove from Benfleet in Essex has been overwhelmed by the response she has had, not only from her local community but from supporters around the world and celebrities including TV presenters, sports personalities and reality TV stars.

Devastated that her friend had been told following radiotherapy for her inoperable brain tumour that there was no further treatment available under the NHS, Lillie came up with the business idea for a Dragon’s Den-style competition at her school, which would help her schoolfriend, Lily Wythe, 14, access private treatment in the US for the deadliest type of childhood cancer. The One Pound Warriors, as she named her Facebook group, harnessed the power of social media by inviting people to join the group and donate £1.

Aided by her mum Sarah who set up the group, Lily’s desperate story has touched so many hearts, sky-rocketing the total raised for Lily’s treatment from £70,000 a week ago to the target needed to pay for the medical treatment at Seattle Children’s Hospital, although the family will still need to cover their expenses in the States. And they may need to fly back and forth several times.

Lily, who along with Lillie, is a pupil at Eastwood Academy in Southend, was diagnosed four months ago with a high-grade  diffuse intrinsic pontine glioma (DIPG). The survival prognosis for this type of brain tumour – the deadliest type of childhood cancer – is eight to 12 months.

After radiotherapy treatment, Lily’s family was told there was no further treatment available on the NHS and to go home and ‘make memories’.

Lillie said: “When I first heard about Lily’s diagnosis, I felt helpless. Now that I have done the Facebook group and enlisted the support of so many other people, I feel like I’ve done something really positive. I’m so grateful to everyone who got involved to make this a success.”

Her proud dad Mark added:  “It’s just incredible really. The idea came from the helplessness of the situation and wanting to do something to help her dear friend. It’s fantastic what has been achieved in such a short space of time. I couldn’t be prouder of my daughter.”

“Lily is an absolute inspiration. If anyone can beat this horrible disease, she can.”

Hugh Adams, head of stakeholder relations at Brain Tumour Research, said: “This is the most extraordinary achievement. Huge congratulations to Lillie and everyone who has got involved with The One Pound Warriors.

“Our hearts go out to the family of Lily Wythe as they start preparing for further treatment which they had been told by doctors in the UK wasn’t possible. It is just not acceptable that families who have loved ones affected by brain tumours are sent home and told to make memories. On behalf of us all at Brain Tumour Research, I would like to wish Lily and her family all the very best.

“We desperately need to increase the investment in research into brain tumours so that people don’t have to resort to raising hundreds of thousands of pounds to access treatment abroad. It’s only through research that we will find more effective treatments for brain tumour patients and, ultimately, a cure.”