Husband, father-of-two and West Ham fan Steve Lloyd passed away in September 2015 seven years after being diagnosed with an aggressive and inoperable glioblastoma multiforme (GBM) brain tumour. He had just turned 40. Steve underwent treatment and retired from work in January 2015 in order to spend as much time as possible with his wife Angela and daughters Bethany, 12, and Chloe, 10. They were at his side when he passed away.

Steve was extremely handsome, funny and a bit cheeky. He was very confident and a bit of a joker. I first met him after seeing him in a friend’s holiday photographs and she arranged for us to get together. He had a great network of friends, many of whom went to school together, and they liked normal boy’s stuff such as football – Steve was a lifelong West Ham fan - and socialising.

After school, Steve did an apprenticeship in electrical engineering with London Underground. It is now known as Transport for London and Steve spent his whole career there. Little could anyone have known that, before he was 40, he would be forced to retire through ill health and pass away just months later.

Steve left his work behind after being told his brain tumour was terminal and he had around a year to live. He wanted to forget about his job and spend time with his family. We have two daughters, Bethany, 12, and Chloe, 10. Just a few months ago we took the heart-breaking decision to sit them down and explain that their daddy was going to die.

I sat next to Steve on the sofa and the girls sat opposite us. I didn’t want to frighten them so tried my hardest not to break-down as I said: “You know daddy has been ill and has been having scans and treatment to help him feel better. Sadly, it isn’t working and he is going to get very sick. We don’t know how quickly it is going to happen or exactly what is going to happen but when we find anything out we are going to tell you.” I went on to explain that there would come a time when daddy would die and wouldn’t be with us anymore. They understood what it meant.

The girls have grown up knowing Steve was unwell. They were just five and three when, in October 2008, he was first diagnosed with an inoperable and aggressive glioblastoma multiforme (GBM) brain tumour. Over the years they lived with the knowledge that he was poorly and were with us on numerous trips to hospital as he underwent treatment.

The first sign that anything was wrong came when Steve had a seizure at home and was taken to hospital by ambulance. Nothing like that had ever happened before and we had no idea what was wrong. One doctor suggested it was a cause for concern as a seizure like this wasn’t expected in someone so young and relatively fit. Steve stayed in overnight and, the next morning when a new shift came on, the doctor said there was nothing to worry about and this type of thing just happened sometimes.

We weren’t happy just to leave it at that and, as Steve had private health care through work, he had an MRI scan at a hospital in Leigh-on-Sea. Ironically, when the brain tumour was revealed we felt relieved. Looking back of course it seems crazy but we assumed it would be removed and therefore “better” than being diagnosed with a life-long condition such as epilepsy. We knew nothing about brain tumours before Steve’s diagnosis; they became a part of our daily life.

Within a few short weeks of Steve having the seizure in October and my 30th birthday on 22 November 2008, our lives changed forever. Because of its location, we were told that Steve’s tumour was inoperable. It was growing in different places in his brain, deep in the area which controls speech and cognitive skills. The tumour was high-grade and growing and it was a case of trying to slow the growth and manage the symptoms for as long as possible. We knew from day one that surgery was not an option. Steve’s condition was terminal.

To hear that diagnosis is completely shocking. It really is like having a rug pulled out from under you. We went home and talked to the girls, just giving them a few details at first. Our time together was going to be even more precious than ever before so we started doing things. We wanted to create memories which we could cherish in the future and which would stay with the girls forever. We took them to Disneyland in America and to Lapland. On our ninth wedding anniversary in 2010, Steve and I renewed our vows and enjoyed a second honeymoon in Las Vegas. We had one of our best adventures ever when we travelled to Australia last December. We had a three week road trip, starting in Sydney and travelling along the Gold Coast where we spent Christmas and New Year with some very close friends.

We know that, from now on, things are going to get extremely hard for us all. In October 2014 we were told that Steve had around 12 months to live. That was when we told the girls they were going to lose their dad. In January 2015 Steve retired from work on the grounds of ill health.

Steve underwent six weeks of full-brain radiotherapy which made him extremely sick. He also had 11 courses of chemotherapy, the last round made him very poorly and he opted to finish this in June 2015. He was doing OK and could walk for around ten minutes, we had a wheelchair for when he tired and had to make adjustments to the way we lived our lives.

Steve and I were very open with each other and talked a lot. He also spent a lot of time with his friends, playing the sympathy card when he was losing at snooker! The girls had counselling and did activities with Little Havens, part of Havens Hospice in Westcliff on Sea.

Every six weeks, Steve had a scan and, each time, we just hoped against hope that there had been no change in his tumour. Sadly during the summer a scan showed substantial growth and his consultant advised us he had a matter of months left. This has made us more determined than ever to raise awareness and we worked with the national charity Brain Tumour Research to do this. We were with Steve as he passed away quietly and peacefully on Sunday 27th September.

Knowing about Steve’s tumour allowed us to do lovely things together as a family. Some people aren’t fortunate enough to have that time. 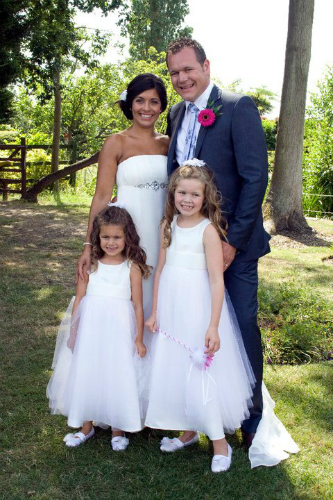