Toddler Sam’s morning vomiting was initially put down to a stomach bug but within weeks an MRI scan revealed he had a brain tumour. He underwent multiple surgeries and gruelling chemotherapy treatment. Accompanied by mum Fiona, father Eoin and brother Luke, Sam received NHS-funded proton beam therapy in America. Despite the efforts of medical teams on both sides of the Atlantic and the love and support of his family, Sam passed away at home in May 2014. He was just five years old.

“We were told our precious toddler had a mass on his brain and needed surgery. It was horrifying. We signed consent forms knowing that Sam might not survive the surgery or could be left with permanent disabilities. If we didn’t sign he would die anyway. There was no choice to make. Sam’s condition was deteriorating so rapidly that within the space of a few days of his first symptoms he could no longer get out of bed.”

Sam was our second child, a Christmas baby born on 27th December 2008, and a little brother for Luke. We had a family break in April 2011 and went to the Lake District for a few days. It was there that we had the first sign something might be wrong.

Sam woke up one morning and was promptly sick. He had been swimming a lot and I thought perhaps he had swallowed too much water and thought nothing more of it.

Once we got home to Scotland, Sam was being sick in the mornings on a number of occasions and would then be fine for the rest of the day. Our GP dismissed it as a tummy bug but I was sure it was something else.

It was around this time that I noticed Sam had taken to holding his head to one side and he had also started to stumble a little. I googled his symptoms and began to think that perhaps he had a brain tumour. Not wanting to appear neurotic, I didn’t tell anyone of these fears so, in a way, when Sam finally had an MRI scan I felt relieved that I was being listened to.

We were told our precious toddler had a mass on his brain and needed surgery. It was horrifying. We also met the news with disbelief, thinking this was the sort of thing which happened to other people, and were terrified about what it meant.

I travelled with Sam in the ambulance as he was transferred from Kilmarnock to the paediatric neurological unit at South Glasgow Hospital. We were being taken to a place I had never been to before and I was entering a nightmarish world. I was so badly shocked that I was unable to carry Sam or walk so I was helped into a wheelchair.

We signed consent forms knowing that Sam might not survive the surgery or could be left with permanent disabilities. If we didn’t sign the forms he would die anyway. There was no choice to make. Sam was deteriorating so rapidly that just a few days after his first symptoms he could no longer get out of bed.

Sam had his surgery on 22nd May 2011. The tumour was removed and a shunt was fitted to drain the fluid which had built up. A few days later we were visited by an oncology nurse. We were soon to be told that the tumour was a grade three ependymoma and Sam needed chemotherapy straight away. This would last for between six and 18 months and be administered through a central line. The doctor couldn’t say how or why our son had got the tumour but we were not to blame ourselves.

The treatment started and it was as if our old life had been destroyed; family life as we knew it was gone. One or other of us would always be either taking Sam for his treatment or be at his side in hospital. On many occasions Sam was taken ill at home in the middle of the night and we would have to take him in. It was a dreadful time for Luke who was just five.

The drugs made Sam very sick, he lost a lot of weight and had to be fed by a tube. It took so much out of him but somehow he always bounced back. He got used to taking his medication. He was so young and it was the only life he knew.

We were delighted to discover that, after six months of chemo, the tumour had shrunk but, to our horror, the next routine scan showed it had grown. We opted to have more surgery, another nine-hour procedure which took place in September 2012. Again, we knew the risks but what else were we to do?

We said goodbye and, as Sam was taken into theatre, I fell into a heap on the floor. I didn’t know if I would see him again. I cannot describe the pain I felt, it was as if I was being physically tortured.

Thankfully, Sam came through surgery and his doctors were pleased. He recovered well and we referred to Oklahoma for proton beam therapy. The treatment was not available here but the NHS would fund it in the US. Eoin and I travelled with Sam and Luke. We were away for ten weeks. It was a lonely time and each day for 35 days Sam had the treatment under general anaesthetic.

We went home to Scotland and saw Sam’s consultant in March 2013. Initially, the scans looked good but by September the tumour was back. We were told there was very little chance of Sam surviving and there was little else to be done. The news was devastating.

As Sam and his brother were both so young we chose not to tell them. Instead, we spent as much time together as we could. We went to Legoland and, in December, took the boys to Lapland. For much of the time Sam looked so well that no-one would have known about his brain tumour and I think that made it harder to bear. As the New Year came, Sam started vomiting again in the mornings as the tumour grew, increasing pressure inside his head. He went back into surgery and was prescribed steroids which caused him to put on so much weight he became unrecognisable. By this stage he was suffering from increasing weakness down one side and wasn’t really able to walk.

Sam had his third tumour resection in January 2014 and, by March, he was too poorly to have the planned radiotherapy and an experimental drug. The steroids made Sam hungry but he could hardly eat. For four weeks he slept on our bed and nurses would come in everyday to help us care for him.

Our world closed in. We couldn’t focus on anything but what the day ahead might bring. We had no choice but to keep ourselves going. Luke spent time with Sam and could see how poorly he was. We had to look after them both.

In the final days it was as if Sam had dementia. He was trapped in his own body and would repeat the same thing over and over again. The day came that Sam was very agitated when the nurse left. He was frustrated, he was hungry but couldn’t eat, he wanted to play but couldn’t get up. I was advised to give him the drug Midazolam to calm him down. He went to sleep and I carried him into our bedroom.

There was very little time left and from that point on he was unconscious. The nurse visited again to fit a syringe driver to administer morphine. We sat with Sam all day and he passed away peacefully in our arms at 8.45pm on Saturday 2nd May 2014.

Every day since has been a battle. When Sam was very poorly, Eoin asked him what he would like us to do for other sick children. His answer was simple: give them presents. We set up Send-A-Message in Sam’s memory and we get some comfort from raising funds to send gifts to sick children and their siblings. Sam always loved getting presents, especially ones that were delivered. It is important to think that you are helping others, it keeps me going and helps me to ensure Sam will never be forgotten.

I was horrified to learn that brain tumours kill more children and adults under the age of 40 than any other cancer yet so little is invested in research. 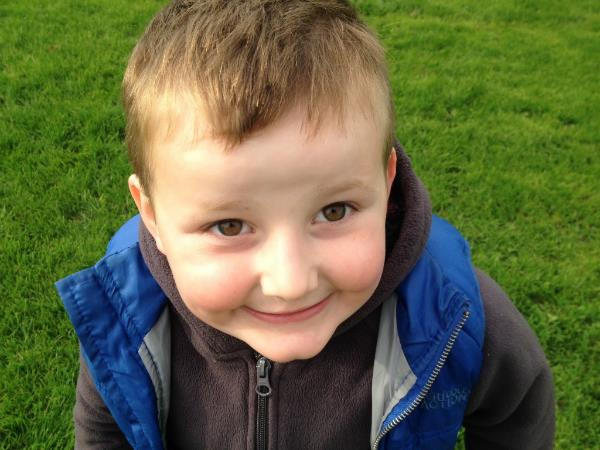