With three grown-up children and his first grandchild to dote on, Richard was only 51 when his health started to fail. Crippling headaches were initially dismissed as tension, but later discovered to be a GBM grade 4.

Richard battled surgery, chemotherapy and radiotherapy to be able to walk his eldest daughter down the aisle before the GBM grew and he was told that nothing more could be done.  Richard died at home peacefully in November 2013.

“Despite his shock, Rich gladly donated the tumour tissue for research purposes, hoping it might uncover something that would get rid of it.”

I met Richard in 1978 when he was 16 and I was 17.  We were working together at the time, me in the kitchens and him as an electrician.  He was a proper outdoorsy type, loved riding his motorbikes and fishing, and something clicked.

Four years later, in May 1982, we married.  By then, Rich had given up his motorbike for a car, and we settled into married life together in Warrington.  Our first child, Jenna, arrived in 1988 and then the twins Simon and Katie came along in 1992.

I gave up work after having Jenna and became a stay-at-home mum.  Rich absorbed the pressure of being the breadwinner, and worked long hours to make sure we didn’t go without.  When we did have precious family time, we would often take relaxing holidays in Tenby, Cornwall or Devon.  He even realised his dream and bought another motorbike, a Honda CB 1000R.  It was his pride and joy.

Rich was never ill, and I honestly can’t remember him ever taking a day off work sick.  When he started to get bad headaches in September 2012, I was surprised and alarmed.  Around the same time, he began to experience confusion and would do odd things like stay in the bathroom for a really long time.

I knew something was wrong, so we visited our GP together.  I explained the symptoms, told her that I thought something wasn’t right, but she thought it might be depression.  Neither Rich or I thought it was, and after completing a patient health questionnaire, it was quite clear he wasn’t depressed.

Rich was beginning to suffer with exhaustion, he didn’t want to get out of bed, he became sensitive to bright light, and on a couple of occasions fell asleep in the van at work.  Thankfully, the lads he was supervising covered for him, but this was so unusual we knew we needed answers.

In early November 2012 Rich had the worst, agonising, crippling headache, and I knew I had to do something.  I rang 111 and they advised me to take him to A&E.  We went to Warrington Hospital and after a number of tests, a tension headache was diagnosed and he was discharged with co-codamol.  I must admit, I was so relieved that it was just tension and nothing serious.

Our GP was fantastic, when she heard what had happened at A&E she insisted that he needed to have a scan.  On Saturday 24th November 2012, we went for an MRI scan at Warrington Hospital and that’s where they discovered something that certainly wasn’t a tension headache.

The consultant told us that there was a tumour, but at this stage they didn’t know what type, or how bad.  Rich was admitted to the ward and, during the week that they kept him in, they ran more tests to determine if the cancer had spread.

Rich was transferred to The Walton Centre for Neurology and Neurosurgery, where he had surgery to remove the tumour.  Unfortunately, only 90% was operable, and the remainder would have to be treated with chemotherapy and radiotherapy.

After the surgery, Rich came around from the anaesthetic with a big smile on his face, wanting a cup of tea.  It was amazing, like the old Rich was back in the room.

His care was then transferred to the Clatterbridge Cancer Centre on the Wirral and, with his driving licence being revoked, every day for six weeks I had to drive him there for simultaneous oral chemotherapy and radiotherapy.  The treatment was really gruelling, he seemed ok for the first month, but after that he was totally exhausted all the time as it took its toll on him.

During the treatment, the results from the biopsy on his tumour came through from Walton.  We were devastated to learn it was a glioblastoma multiforme (GBM) grade 4, it wasn’t curable, and would probably grow back.  Despite his shock, Rich gladly donated the tumour tissue for research purposes, hoping it might uncover something that would get rid of it.

The exhaustion from the chemo and radiotherapy overwhelmed Rich, and he barely left the house as he recovered.  His only freedom was to occasionally walk his beloved dog Prince, but for everything else he relied on me.  I took time off work as a part-time school cook for six months, but it was hard for us financially even with critical illness cover and mortgage protection, so I went back and left Rich at home.

By now, the children were all quite grown up and only Simon was still living with us.  He had decided to train as an apprentice electrician just like his Dad, but for the hours he was in the house, he was such an amazing help to me.  Jenna (with baby Mason, born in May 2012) and Katie also came over frequently to see how Rich was doing, and help out.

Jenna got married in February 2013, and we were so fortunate that the treatment meant that Rich was well enough to walk his daughter down the aisle.  It was a fantastic day for the whole family.

In May, Rich started to complain that his left arm felt “funny”, then his left leg, and then lumps appeared by his right eye that looked like small cysts.  I didn’t know it at this point, but they weren’t cysts, it was the GBM growing in a different direction and becoming visible.

In June, Rich’s left side had become so weak that we converted the dining room into a bedroom so that he no longer had to navigate the stairs.  It was awful for him by this point because he lost his dignity too, as we had to use a bed pan and give him bed baths.

Clatterbridge told us in July that they were going to suspend the chemotherapy as it was no longer working.  Within days, on 19th July, Rich collapsed, and after being rushed to A&E, he was admitted and given steroids to reduce the pressure on his brain.  By now, the lumps by the side of his eye were getting bigger, and after another MRI scan we were given the devastating news that the GBM had grown, and was spreading in different directions.

All that was left open to us by this point was palliative care.  He was prescribed strong painkillers, which kept him comfortable, but it was never quite enough, so in August he was admitted to St. Rocco’s Hospice in Warrington for a few weeks of pain relief.  During this time, his spirits were lifted by Simon qualifying as an electrician and getting his JIB card.

Rich was so brave through it all.  I was distraught at the thought of losing him, but I had to get a grip and be strong for the whole family.  As he became weaker, Rich came back home.  I had nurses coming in every day, to control his pain, but in the last two weeks he was asleep for most of the time anyway.

He slipped away peacefully on 18th November 2013, aged 51.  I was by his side, along with his two sisters and Simon.  Jenna and Katie came over shortly after.

Even though I knew his death was coming, it hit me so hard.  I knew he couldn’t carry on living as he was, a shell of the man I’d married and loved for 31 years.  But with him gone, it left a huge hole in my life.

Rich never did tell me what arrangements he wanted for his funeral, even in his final weeks he didn’t want to discuss it.  I chose all his favourite music, and we had a non-religious ceremony with a funeral celebrant.  He was so well loved, almost 300 people showed up at the crematorium for the service.

I’m still struggling, three years on.  Simon has now moved out, so I’m in our family home alone.  Shortly after Rich died, our beloved black Labrador became ill and lost use of his legs, so I went from nursing my husband to nursing Prince.  I have lots of great friends, and my family look after me too, but it’s not the same.

Before Rich became ill, I’d never come across anyone with a brain tumour, but now there seem to be so many.  It is wrong that only 1% of the national spend on cancer research has been allocated to this devastating disease, and the expectation is unlikely to change in the next 20 years, because not enough money goes into brain tumour research. My family and friends have been so supportive to me and the children, during Richard’s illness, and since his death.  This disease is sad, it’s horrifying, it’s relentless.  I am trying to carry on the best that I can, but with Jenna now expecting twins, all I can think about is how much Rich would have loved to see his twin baby grandchildren.  He should not have been taken away from us so young. 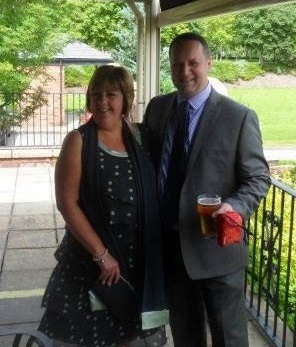