We are grateful to Phoebe who worked with us in September 2021 to share her story here. Sadly, she passed away in April 2022. We remember Phoebe as we continue our work to raise awareness of this devastating disease and to fund research to help find a cure. She will be forever in our hearts.

In 2018, actor Phoebe Frances Brown was diagnosed with an incurable tumour in the area of her brain that controls speech, language and memory. The 28-year-old from Nottinghamshire originally thought her symptoms, which included headaches and tiredness, were caused by a busy stint performing at the Edinburgh Fringe Festival. However, when her symptoms progressed, she was given an MRI scan, which revealed a large tumour on the left side of her brain. Despite going through surgery, radiotherapy and chemotherapy, Phoebe has continued to forge a successful career on the stage. She is about to star in her own one-woman show, which tells the story of finding herself in the bleakest of times and of discovering gladness in the saddest of moments.

My symptoms began in August 2018. I’d been in Edinburgh, performing at the Fringe Festival and was feeling really tired. The festival is always intense; you work hard and play hard, so it wasn’t all that surprising that I was feeling exhausted and suffering from headaches. Things didn’t improve after The Fringe, however, and in September it all got a bit more serious. I would wake up feeling sick in the early hours of the morning, stumble to the toilet then vomit. Afterwards, I’d go back to bed, fall asleep and forget what had happened. Then, later in the day, I would suddenly remember.

“I was finding it increasingly hard to get up in the morning and feeling depressed because I just didn’t know what was wrong with me.”

I’d never suffered from depression or any mental health issues previously and it felt as if my whole personality was changing, which was really scary. In desperation, I called 111 one day and spoke to an NHS clinician, telling them that I felt hopeless. They thought it was a psychological condition and that was the only explanation that I could come up with too.

My symptoms continued for weeks. I was living in Elephant & Castle in London at the time but when I suddenly began to get really severe headaches, which first came on while I was at a Bonfire Night event, I decided to go to stay with my parents in Nottingham. I got off the train and went straight from the station to the doctor’s surgery. The pain in my head was horrendous. I saw a GP, who prescribed me with migraine medication and paracetamol. I went home to Mum and Dad’s house and I was sick again. Feeling dreadful and utterly helpless, I came to the decision to move home for a while.

My symptoms weren’t going away and I had started to get double-vision, so, at the end of November, I was referred for an MRI scan. Having been referred by my GP on the Friday, I managed to get an appointment for a scan at Park Private Clinic in Nottingham on the Monday. The weekend before that appointment was so strange, as I had it hanging over me but there was nothing I could do. I’m part of a comedy collective of female actors called ‘Major Labia’ and we were due to be performing at a gig in London the following week. Over the weekend, it was the artistic director’s 30th birthday party, which I attended. My exciting, busy life was still happening all around me but all I could think about was the forthcoming scan.

“My MRI happened and almost immediately afterwards, I got a call from the clinic telling me I needed to go urgently to Queen’s Medical Centre (QMC) in Nottingham. They’d found a ‘large mass’ in the left side of my brain.”

It was a mixture of relief, knowing that there was a reason for my symptoms, and complete devastation. Five days later, I was back in the hospital having major surgery to debulk the mass.

My operation was on 5 December 2018. It was a lengthy procedure, during which the surgeon managed to remove around 75 percent of the tumour. When I woke up afterwards, I felt really weird. I’d have the thought in my mind of what I wanted to say, but couldn’t articulate the words. This is known as dysphasia and it lasted for quite a while after my surgery. I stayed in hospital for a few days before going home to continue resting and recuperating. On 12 December my parents and I went to see my consultant for the results from my biopsy.

“He explained the diagnosis; a grade 3 astrocytoma. It was cancer. He said they wouldn’t be able to completely get rid of it. It was a massive blow and we were all really upset.”

A few days before I received my biopsy results, I’d found out I’d got a job at The National Theatre in London, which I’d auditioned for in September that year – it was a dream gig. I had been offered the role of Franny in Small Island, a play by Helen Edmundson based on the 2004 novel of the same name by Andrea Levy. I’d also been asked to be the understudy for one of the main parts, Queenie. As soon as I got my diagnosis, I asked my consultant if I could go ahead with the rehearsals, which were starting on 18 February 2019. The answer was ‘yes’ but I had the ‘small’ matter of six weeks of radiotherapy to get through first.

The radiotherapy, which had to be administered five times a week, was horrendous. The side effects were awful but the worst thing about it was that I felt as though it was the first time that I’d been met face-to-face with my own mortality. It all happened so quickly. It was very difficult to process and it is something I’m still trying to get my head around.

My post-radiation MRI scan showed that things were stable but I had to follow up with a course of chemotherapy, to try to slow any progression of the disease. I focused hard on learning my lines for Small Island and returned to London, in time to join rehearsals. It was a shock for my friends to see me again; I’d lost a lot of hair because of the treatment. We joked that I looked like Bill Bailey, as it had mostly fallen out at the front. I’d lost my fringe but still had long locks at the back. It was hideous and hilarious in equal measure. Eventually, I decided to chop it all off and have it really short. My friends were great and really supportive.

Meanwhile, I continued going to work but during one rehearsal I had a seizure, which meant I had to take some time out. While I was taking a break, a decision was made to reassign the understudy role to another actor. I was devastated but deep down, I knew that I wouldn’t have been able to do it. Luckily, I was able to get back to rehearsals and go ahead with playing the part of Franny, which was completely manageable. The National was brilliant; even though I only had a few lines, they hired an understudy for me as well. I ended up sharing the role with my understudy, the two of us taking it in turns to appear each night.

“I did all the shows in the final week and managed to complete the whole run of four months. It was a joy and felt like such an achievement, as I was on chemotherapy throughout.”

Small Island finished on 10 August and after that, I got some radio work, which kept me busy. I also started to focus on a new project; a show called The Glad Game, which I’d begun writing in hospital, in which I explore my health journey. The hospital Wi-Fi was shocking; Netflix wasn’t an option and there was nothing to do but write. My brother brought my laptop in for me and the play started to grow and grow. I continued writing after I was discharged and it wasn’t long until I had first draft of my first play. I sent it to a few close contacts, including independent producer, Pippa Frith. Pippa showed it to director Tessa Walker and before I knew it, plans were being put in place for me to perform the play and share my lived experience with a live theatre audience.

I did some initial showings of The Glad Game at the end of 2019 and Nottingham Playhouse said that they really wanted to stage it. It was due to start in March 2020, which was really exciting. However, when the COVID-19 pandemic took hold in the UK, it was postponed. It ended up being postponed several more times, as the coronavirus restrictions went on and on. During lockdown, I stayed at home in Nottingham and occupied myself by writing a short comedy film to be filmed and produced. It will be available on iPlayer in the near future.

“Then, in December 2020, my family was struck with another unexpected tragedy, when my dad died very suddenly from a brain haemorrhage. It was completely devastating.” 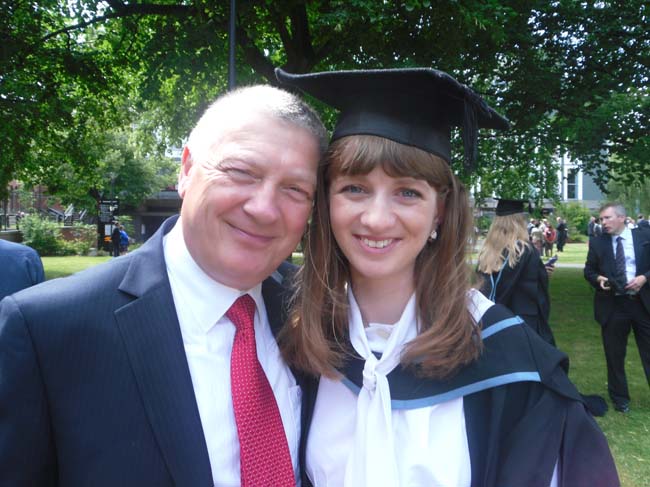 Life offered no let-up in the new year; we were back in lockdown and, in March 2021, I found out that my tumour had started to grow back. The growth was discovered during a routine MRI scan; I’d had no new symptoms whatsoever. The outcome of the progression was another course of chemotherapy. It’s gruelling, as it makes me really tired but I’m thankful that, once again, I’ve been able to continue working throughout my treatment and I’m delighted that The Glad Game tour is finally going to begin in my home city of Nottingham on 24 September 2021. The plan is for it to tour in Autumn 2021 and Spring 2022, supported by charity partner Brain Tumour Research. It will also be available as a made-for-film digital edition streamed from each venue.

It will be really special performing the play in the Nottingham Playhouse, which has been so supportive of me, as have all my Nottingham family and friends over what has been the most challenging two-and-a-half years of my life. The Glad Game aims to debunk some of the myths around what life is like for people, particularly young people, living with cancer. It is about a life lived with cancer but also about creating the life you want in the most difficult of circumstances. It’s about how, what and who you love can pull you through bad times. The play finishes at the point when I get back on stage at The National. I flirted with the idea of including my dad’s death and the tumour relapse earlier this year but instead I decided to end it on a positive.

I wanted to write and perform a play about life being stranger than fiction; that even after receiving the most devastating news, there's still hilarity and joy to be had. There are still things to be glad about. 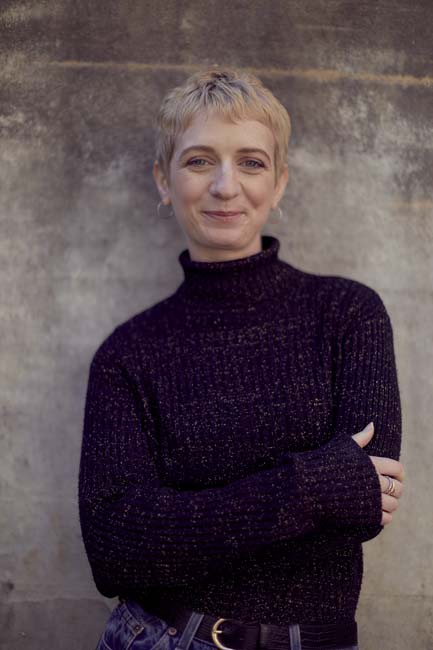