Paul was enjoying life with his family in Singapore. With a great career and a busy social life, they were living their dreams. But within months he was diagnosed with a grade IV glioblastoma multiforme (GBM) brain tumour. He passed away 20 months later leaving wife Emma and young son Thomas.
Emma tells his story…

It isn’t until you are in a situation like we were that you begin to realise how many people are affected by brain tumours, the devastation they cause and just how underfunded this type of cancer is with just 1% of the national spend on cancer research going on this area.

Paul was just 41 when he was diagnosed with a brain tumour in May 2012.We lost him 20 months later.

We had only recently moved to Singapore. Paul travelled a lot for work and this was his favourite place in the whole world. He had a great job in financial services managing global banking relationships and we enjoyed the lifestyle which went with it. To start with, he experienced very mild symptoms such as a pain in his right foot. It could have been gout and, to be honest, that would have been consistent with the life we were living.

Following that there was an episode at work which presented itself like a transient stroke. We were just settling into life in a new country, one with a very different climate, and we thought these things might have affected his health.

In a way, our location was very helpful. The medical system in Singapore is very different to the NHS. You pay as you go so they are very keen to get you seen straight away and within a few hours of the episode at work we knew Paul had something on his brain. We waited for his parents to travel over from England and he spent time with them before going ahead with a biopsy.

Then came the news that Paul had a grade IV glioblastoma multiforme (GBM). Following a resection (removal) of the tumour Paul underwent targeted radiotherapy with concurrent chemotherapy and he was also put on an experimental drug Nimotuzumab. He responded really well to begin with but by the spring of 2013 he had a scan which showed the tumour had started to grow again.

With the diagnosis of the tumour went Paul’s job. He could no longer work in Singapore and it was a massive blow for him as living out there had been a dream scenario.

We took the decision to return to Essex and moved back to our home in Longstomps Avenue, Chelmsford. Our local hospital, the Broomfield in Chelmsford, took over Paul’s care. Their initial reaction was not optimistic, however his case was reviewed by a multi-disciplinary board and we were referred to Queens Hospital in Romford. In May 2013 Paul had an awake surgery to resect the tumour. We were fortunate in that he came through that with no speech deficit although there was some loss to his fine motor skills in his right hand, something which had been gradually worsening previously. A strong dose of steroids helped to overcome some serious post-operative swelling and the chemo continued.

Paul was well during the summer and we bought a 25-year-old camper van which he tinkered about with and we set out to enjoy precious time with our son Thomas. We went fishing in Devon, travelled to the Lake District, saw the ancient monument at Stonehenge and also spent some time horse riding in Suffolk.

As with many people affected by neurological conditions, Paul’s behaviour could be erratic. At times he was easily agitated and that can be difficult in family life. Despite this, we made the most of our time.

Once the summer was over, Paul wanted to take Thomas to see Newcastle United play. We travelled to a match in October but, looking back, that really was the last time he was able to do anything with any degree of independence. By the 9th November and the school firework display he was confined to a wheelchair. He needed more help and Farleigh Hospice was very supportive. I took leave from my job in product management with a software company and we cared for Paul at home.

We were able to ensure Paul was comfortable and had everything he needed. I had a great deal of help from the hospice and also from my company which gave me time off and then allowed me to return to the business when I was ready.

I remain deeply shocked to think that brain tumours really are a poor relation when it comes to funding and am keen to support Brain Tumour Research and its work to raise funds and improve awareness of this dreadful disease which is the biggest cancer killer of children and adults under 40. 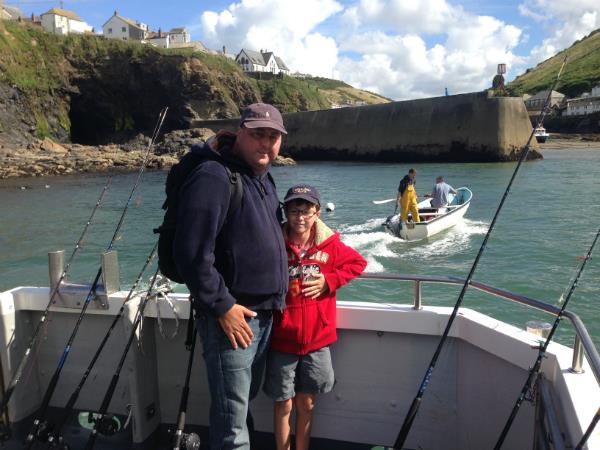