Paul was just starting out on married life when he was diagnosed with a benign brain tumour, which later became malignant.  His courage and determination to leave a lasting legacy for others diagnosed with brain tumours saw him raising tens of thousands of pounds to fund vital research to find more effective treatments and ultimately a cure.

Paul and I had only just been married for three months in November 2009 when he started suffering with terrible headaches.  Over Christmas a work colleague phoned me to say that he had fainted.

At the end of January 2010, Paul saw a migraine specialist who, concerned that Paul might be experiencing absent seizures rather than fainting, referred him for an MRI scan.  We were expecting to hear confirmation that he was suffering migraines or that his symptoms were down to stress.  It was a huge shock to us both to discover that he had a satsuma-sized tumour in the frontal lobe of his brain, which turned out to be a grade II Astrocytoma.

Paul had an operation to debulk the tumour in February 2010, 10 days after the diagnosis and was discharged the day before his 33rd birthday on 27th February.  He was left with short-term memory loss and struggling with planning day-to-day events, as well as epilepsy, which resulted in him losing his driving licence.

Paul was amazing, exhibiting limitless positivity through six weeks of radiotherapy which began in April 2010 at the Christie and want back to doing the job he loved.

Eventually Paul returned to work and on 22nd June 2011, having completed a whole year seizure-free, he celebrated being allowed to drive once again – no longer being dependent on me and friends for lifts everywhere.  His life seemed to be getting back to normal.  But it all came crashing down in November 2011 when Paul went for a routine MRI scan.  It showed new growth, which was obviously a devastating blow.  Nevertheless, Paul picked himself back up again and began 12 cycles of chemotherapy treatment with great strength and determination.

Paul was also determined to bring hope for a cure to the many people affected by brain tumours and in 2012 held the first “On Yer Bike for brain tumours” fundraiser (an indoor spinning class event over a 12 hour period) in his home town of Glossop to raise funds for Brain Tumour Research. The event was held again with huge success in 2013.

After a stable period, we got the news that the tumour was active again and chemotherapy would be started.  This did not stop Paul working, water skiing, doing lots of socialising, walking is beloved dog or getting away on holidays and short breaks.

In the summer of 2013, we received the agonising news that the chemotherapy had stopped working and we were now facing a terminal diagnosis of six to 12 months.

Paul still refused to lay down and accept this, beginning a new regime of chemotherapy and embracing a ‘bucket list’ which included cramming in trips to concerts, house parties, stag do’s, a trip to Dublin, duties as a best man to a dear friend and the fulfilment of an ambition to go into a children’s ‘ball pool’ for the first time!

Paul kept all of us, medical staff included, amazed by his strength of character and determination to live his life as long as he could.

2014 alone racked up a few hospital admissions, escaping hospital for his birthday party, a stay in hospice for symptom control and having fun with every district nurse, Macmillan contact, hospice at home and social services carer were so very lucky to meet.

In June 2014, Paul’s quality of life deteriorated and it was time to move the hospice where Paul had decided to spend his final days.  Those final weeks were filled with love, friendship, laughter, stories ad a few tears.

On 20th June 2014, Paul was set free from this horrible disease.

Paul’s story is not unique, not unusual and not fair.  The only way families will ever hear the words we longed for: “there is a cure” is through research moving forward.  Brain Tumour Research is massively underfunded and Paul was determined to do his bit to change that.  The 2015 On Yer Bike for brain tumours event, held on what would have been Paul’s 38th birthday, saw friends and family getting together in his memory to continue the work he had begun, raising more than £33,000. 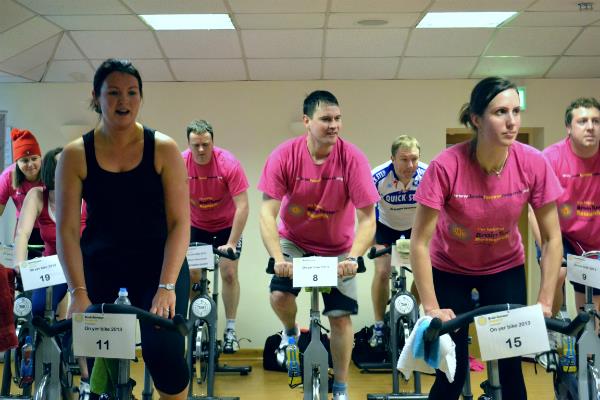