Father-of-two Nigel Legg was enjoying life and when he started to experience problems with his balance, hearing and eyesight. After numerous trips to doctors Nigel was finally referred for a CT scan where it was revealed he had a glioblastoma multiforme (GBM), a very aggressive form of brain tumour, and given the prognosis of 14 months. Sadly, Nigel died just six weeks later, leaving behind his wife Juliet and sons Michael and Jamie.


“When the results came in that Nigel had a brain tumour my heart stopped beating. They explained that they would need to do a biopsy to get a formal diagnosis. But we both knew it was serious.”

Here is Nigel’s story as told by his wife Juliet…

Nigel and I met at the University of Brighton in our early 20s and moved to Reading soon after graduating. Nigel loved technology and building computers from scratch was his favourite thing to do. When our boys Michael (Mikey) and Jamie were old enough it was a passion that he passed on.

It was March 2012 when Nigel finally admitted that he wasn’t feeling himself. For a couple of months, he had been experiencing balance issues and severe neck pain. My husband wasn’t the type of person to complain or make a fuss, he was very practical and didn’t like to have people worry about him. He had suffered from neck and back pain in the past so this news wasn’t alarming but we agreed he should go to the chiropractor.

The chiropractor took me to one side and asked if Nigel had had a recent head injury, as he was very confused and he insisted we go back to the doctors as something wasn’t right.

The doctors just prescribed him painkillers, but this didn’t help. He was still in pain, disorientated and was struggling to keep food or water down. Yet again the doctor didn’t refer him to a consultant as he thought Nigel might have a virus.

By the end of March, Nigel’s legs were giving way and he was dropping things as his hands were shaking so much. We visited another doctor who thought he might have labyrinthitis and gave him anti-sickness medication, but I knew he needed to go to the hospital as he couldn’t go on living like this.

Finally, we managed to get him a referral to a neurologist at the Royal Berkshire hospital. It was heart breaking to see him in so much pain, and by the time his appointment came round a few weeks later, he was confined to a wheelchair. The neurologist at the hospital examined Nigel and immediately booked him in for an MRI.

When the results came in that Nigel had a brain tumour my heart stopped beating. They explained that they would need to do a biopsy to get a formal diagnosis. But we both knew it was serious.

Telling the boys was hard, but we agreed that we needed to talk them through what was happening. Jamie was 12 at the time and Michael was about to turn 17 that week, it really was a lot of information for them to get their heads round. I managed to find a comic strip book about what a brain tumour was, to help Jamie understand what was happening, but looking back I don’t think they thought it was as serious as it was.

While awaiting the date for the biopsy Nigel carried on going to work and managed to attend Michael’s leavers’ prize giving at school and Jamie’s school fair. Nigel was also in shock, but he still remained positive and kept up his carry on life as usual attitude.

Surgery was only ever going to be a short-term solution but the operation went well and they removed as much of the tumour as they could.

The doctor informed us that Nigel’s type of tumour was aggressive and cancerous, a grade four glioblastoma multiforme (GBM). Nigel and I just sat there trying to get our heads round what we had just been told when the nurse, without being asked, stated that Nigel a maximum of 14 months to live. We were taken aback as we didn’t want this information. We chose to focus on what the doctor said about simultaneous chemotherapy and radiotherapy to try to extend his life. We were also advised to take our summer holiday to Cumbria early so they could start the treatment when we got back.

It was lovely being away as a family and, although Nigel was tired and in a bit of pain, he ate well and joined in where he could. On the way home, we stopped in Preston for a night to break up the journey. However, the next morning, Nigel took a turn for the worse, so we had to call an ambulance from the hotel.

He had another MRI scan at the hospital and we were told the tumour had grown rapidly and was now taking over almost half of the brain. They did what they could to get him well enough to travel back to Reading, but he deteriorated quickly and died in Preston Hospital on 10th June. It was the day before he was due to start the chemotherapy and radiotherapy.

When Nigel found out he was terminally ill, he was devastated not only for himself but for what it would mean to us as a family. He so badly wanted to live and not abandon us, but wanted to put things in place to make sure we could carry on without him. He also did not seek sympathy and many friends did not even know he was ill as he saw no reason to burden people with the information.

About a week after Nigel died, Mikey asked if it would be okay if he could go back to sixth form college as he wanted to get back to some sort of routine. Despite his loss he worked hard and secured a place at university to study Computer Science. His dad would have been so proud of him.  He is in his final year at Plymouth University, which coincidently is where charity Brain Tumour Research has a Centre of Excellence, where scientists are researching to find a cure for the disease.

Jamie struggled at first and was very nervous to go back to school. Luckily his school could not have been more supportive and he was able to get back to his studies and ended up with a very good set of GCSEs. He had a couple of sessions of counselling with See Saw, an Oxfordshire-based children’s bereavement charity. Like Mikey, he is following in his father’s footsteps and studying computer science in sixth form. I see a lot of his dad in him, especially in his tenacity with his work and his ability to give sound advice.

Five years on I wouldn’t say that we have come to terms with Nigel dying, but we have learned to live alongside our grief. Nigel would be so proud of the boys and what they have achieved. It would have been wonderful if we had been able to spend more time with him and he had been able to hold the cancer off, but it wasn’t meant to be. In some ways I’m glad he died quickly, not in horrific pain or confined to a hospital bed. I have since heard stories of people’s personalities changing due to a tumour of this kind, and I feel a little thankful that Nigel never changed. The funny, supportive and wonderful man I married 20 years earlier was still there at the very end. That is the man both me and my boys remember every day and it always makes me smile. 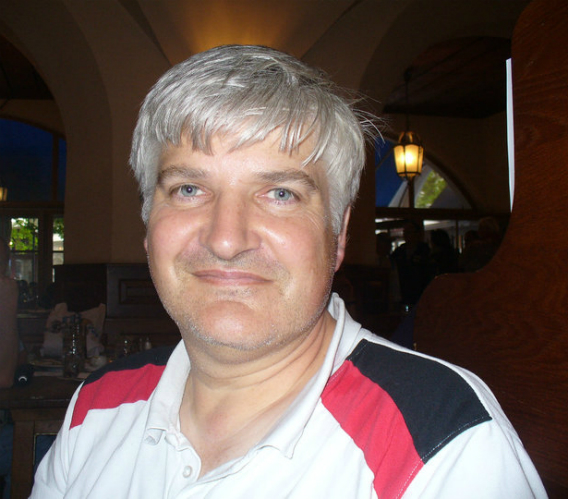