Nick was a loving and intelligent man with a great sense of humour, who loved life.  He had only been married six months when he was diagnosed with an aggressive anaplastic oligodendroglioma brain tumour.  Less than 10 months later, at the age of 30, Nick passed away, having exhausted all known treatments.
In October 2012, my husband Nick was a regular, happy 29 year old man with so much to look forward to. We had only got married 5 months previously and so were still enjoying life as newly-weds. Nick was a loving and intelligent man with an incredible sense of humour. He was a solicitor, but had a very good work-life balance and loved life. We regularly went on holiday and enjoyed going out with friends.

In November 2012, our lives changed dramatically. Nick started to get headaches which he thought were down to needing new glasses. He went to the opticians who picked up on something abnormal and referred him to an ophthalmologist. The optician did not seem too concerned so neither did we at this stage.

While he was waiting for the ophthalmologist appointment to come through his headaches got persistently worse. On Sunday 11th November he decided to go to the local walk-in GP centre as there is always such a wait at our regular doctors’ surgery. The GP there told him there was nothing he could do for a headache and sent Nick home with painkillers and anti-depressants.

Nick went to work on the Monday but came home that evening with an agonising headache. The next day he was in too much pain to go to work so I managed to get an emergency appointment at his doctor’s surgery. His GP referred him straight away to our local hospital to have a scan. We sat waiting for four hours for Nick to have the scan so I asked the doctor what the problem could be and she replied: “It could be serious”.  That scenario hadn't really occurred to me and even when the doctor said it could be, I still thought to myself: “no surely not”.

About five minutes after the scan the doctor came over to us and gave us the terrible news that there was a brain tumour showing on the right side of Nick's brain. It wasn't until then that it hit me. It was serious! This was Tuesday 13th November 2012, just six months after our wedding.

Nick was transferred straight away to King’s College Hospital in London where they prepared him for surgery. He started experiencing more drastic side effects such as left-sided weakness. Two days later they carried out a biopsy where they diagnosed an anaplastic oligodendroglioma. We were told that the tumour was very aggressive and they needed to remove it as soon as possible.

Two days later Nick fell into a coma and so he had emergency surgery to remove as much of the tumour as possible. He was kept in a medically induced coma for two days after surgery because of the amount of swelling he had from the procedure. Once Nick was woken from the coma he was transferred to The London Clinic and had a fairly smooth recovery. He started having physiotherapy to strengthen his left side and be able to walk again. Nick was determined to get better.

Two weeks after surgery he started a six-week course of radiotherapy and what was supposed to be eight months of Temozolomide chemotherapy. Nick returned home from hospital and was soon back to his old self. He travelled into London every day for radiotherapy – a two-hour round trip. Once his radiotherapy was completed, he would walk up to five miles per day to stay fit and active. Nick was also a huge Arsenal fan and tried to get to as many games as possible despite his illness. He was determined to have as normal a life as possible.

In February 2013, Nick’s headaches returned and once again he became unsteady on his left side. His oncologist thought it could be down to his steroids being reduced too low but on the 19th February Nick had a seizure and was taken back to hospital. After an MRI scan we were told that the tumour had recurred. The tumour was too deep to operate so his chemotherapy regime was switched to PCV.

After a couple of weeks, Nick was deteriorating considerably and I was told that the tumour was so aggressive that he had about two weeks to live.  As a last resort he was started on Avastin to try and shut off the blood supply to the tumour. Within three days of starting the new treatment, Nick bounced back and was walking in the corridor at the hospital. The doctors were all amazed. After two infusions the Avastin was combined with Irenotican and Nick was once again back to his old self. He had a scan in June which showed a major reduction in tumour size.

Nick had four good months whilst on the Avastin, which has given me some very precious memories: we went to our friends' wedding in Malta, to Spain and made many other trips too. We also celebrated our 30th Birthdays together with all our friends and family. Nick never let the illness stop him.

Towards the end of July, Nick started to have issues with his balance and started to vomit regularly. The doctors thought it was due to the accumulative effect of the chemotherapy but after an MRI scan it was confirmed that Nick had new tumour growth at the back of the brain. Ironically the old tumour was stable. There was nothing that could be done about it because he had already exhausted all the treatment options and again surgery was not an option.

Nick became very ill very quickly and was moved to our local hospice on the 5th September 2013. This was the same hospice for which Nick and I had run the London Marathon just three years earlier. Nick passed away peacefully the same day with myself and our families all around him.

Nick always had an amazing sense of humour and during the 10 months that he was ill the condition did not affect Nick's temperament and he remained the intelligent and witty man we all knew him to be. During this time, Nick still put other people first and made sure they were okay. Despite the fact that he was going through treatment and fighting this illness he was insistent on enjoying the time that he had right up until the end.

Nick wanted to help others suffering from the same condition that took him from us and he also wanted to donate his organs. Unfortunately the donation of his organs wasn’t to be because the tumour had reached his brain stem, but I have set up The Nick Cotton Foundation to raise money for Brain Tumour Research to help others suffering from this devastating disease.  It is great to hear about all the wonderful advances in treatments for so many different illnesses, including other cancers, but Nick’s brain tumour journey highlighted the desperate need for more effective treatments and ultimately a cure to bring hope for the thousands of people diagnosed with a brain tumour every year. 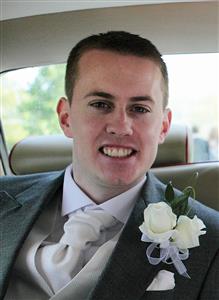