Mike and Eithne were happily married for 31 years and had two children, Peter and Eleanor.  Mike had recently sold his company and they were looking forward to a long retirement together.  Then Mike was diagnosed with a grade IV astrocytoma and was given a prognosis of just eight weeks.

"In memory of Mike - Peter, Eleanor and I have set up the dandy trust, an umbrella group under Brain Tumour Research, with our mission being to strive for early diagnosis.  So often the warning signs are missed because people don’t know enough about brain tumours.  Health professionals  need to be better educated so that patients get referred at the earliest opportunity."
Mike had always been a pretty healthy man.  He was a great business man and, having started off his career as a solicitor, then joined the family firm – a builders’ merchants.

By the time we sold the company in 2008, Mike was managing director and had helped expand Gibbs and Dandy, as it was known, into 12 different branches.  We thought we were going to have a long retirement together.

Looking back on when he started to feel ill, it is difficult to remember specifics, except I can recall a few occasions during August and September 2010 when we were out for dinner and Mike had felt a bit hot and faint and had to go outside for some fresh air.

Shortly after this, Mike complained of “funny feelings” without really going into what he meant (in hindsight these might have been little fits) and we noticed that his writing was getting untidier and he was getting forgetful.  For a completer/finisher type of person, this was particularly frustrating for Mike.

Despite these anomalies, Mike and I went away to Rome together in October for 10 days to celebrate our 30th wedding anniversary.  Mike was really well…  He seemed absolutely fine – yet in retrospect anything could have happened while we were away.

We had a great Christmas, with the icing on the cake being that our son proposed to his gorgeous girlfriend, whilst they were out in Australia.

In January 2011, when Peter and his fiancée, Emma, had returned from Australia, I noticed that Mike seemed unbalanced and was talking out of the side of his mouth and mixing up his words.  Mike did see our GP, but the serious situation was as yet unrecognised…

Then Mike and I went to see “The King’s Speech” at the cinema and by the time we got back he couldn’t remember anything about it.  Mike was finally referred for an MRI scan.  Sitting with the neuro team at Addenbrookes, I caught sight of Mike’s scan and, being a nurse myself, I could see straight away a smoky haze within his brain.  It was horrendous.  At that moment I was sure that his life was about to be cut short.

During the consultation, Mike was unable to give any kind of medical history and would just say “I’m fine, thank you.”   It felt like he was compensating for forgetting things by getting round it this way.  He was a very clever man, but was now reduced to babbling.  I felt embarrassed for him.  It was the worst possible thing seeing someone completely degraded.

My daughter, Eleanor, plucked up the courage to ask how long we had – to which we were given the answer – eight weeks.  In fact he died seven and a half weeks later.  Mike remained very calm.  I am sure he was still thinking of his family.  He was always very protective.

I decided to look after Mike at home. Which I could not have possibly done without tremendous  family support from Peter, Eleanor, Emma, my brother Michael and my very special friend Helen, as well as dedicated district and Macmillan nurses. The GP also did his best to support us. I don’t know whether Mike knew he was dying.  We couldn’t always guess what he wanted.  By this time, even if he could have spoken, Mike was unable to communicate because he had to take epilim to prevent seizures and midazolam for agitatation.  I hope he didn’t realise how ill he was, but I think he did.

We went from being a normal family with a good marriage to that horrendous period of Mike’s last three months and now it is so hard to remember the good times.  I blame myself for not spotting something was seriously wrong sooner.  It doesn’t matter how many times people say that nothing could have been done for him because his grade IV astrocytoma was so catastrophic.

Mike died in April 2011 at the age of 56.  Now, a year later, and again in April, our son, Peter, will be getting married.  It will be very difficult for us all.  Mike would have been very happy.  He was very fond of Emma.

In memory of Mike - Peter, Eleanor and I have set up the dandy trust, a fundraising group under Brain Tumour Research, with our mission being to strive for early diagnosis.  So often the warning signs are missed because people don’t know enough about brain tumours.  GPs particularly need to be better educated so that patients get referred at the earliest opportunity.  Our GP, for instance, had only come across one other case in the whole time he has been in practice (he is in his 50’s) so wasn’t looking for a brain tumour.  Mike’s tumour also went undiagnosed by two consultants in his last six months of life.  Our GP wrote to one of them a few months ago and received a reply that he hadn’t been looking for anything so devastating.

I would also like to make the point that there often seems to be an emphasis on children with brain tumours because it is horrendous to lose a child.  But it is also horrendous to lose a husband, to nurse someone who has lost all his dignity – a 6ft 2”, well-built man who loved his sports as well as going to  concerts, with an incredible business acumen and terrific memory – so many skills which we probably didn’t appreciate at the time.  He was a fantastic problem solver.  Now I have lost him, I need to try and remember all he taught me over the years and try and think of all the happy times… 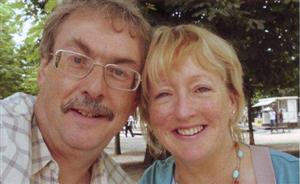