After retiring from his job as a council manager Michael Shane devoted his time to caring for others. A volunteer for Age Concern, he went to the centre in Gateshead every Thursday to help entertain and look after elderly residents in the community. He loved to watch football, especially his beloved Newcastle United. He was fun loving, loved to play tricks and always had a smile on his face. However, in November 2015, it was Michael who needed care. Diagnosed with a glioblastoma multiforme (GBM), Michael passed away just five months later. Since his death, his daughter Diane, along with her husband, mother, friends and members of SS Fitness club have raised £11,000 for the Brain Tumour Research charity in one year. The fundraising has brought together members of her community whose lives have been affected by the disease.

“Dad’s diagnosis was traumatic for us all. Not least because he was the head of the family – he was always the one to look after us and, all of a sudden, the tables had turned. Dad was told he couldn’t drive and, for a man so proud of his independence, that was like losing a limb.”

Here is Michael’s story, as told by his daughter Diane…

I never realised how many lives are devastated by brain tumours until my dad’s diagnosis. He was enjoying retirement in Northumberland when, in December 2015, he was given the agonising news that he had just five months to live. The news tore through my family like a shockwave.

My dad worked for most of his life as a local council manager in Tynedale. At 72 years of age, he was enjoying retired life with my mam, Ann, who he always called Annie. He met my mam while they worked in a tobacco factory and they shared a very special relationship for many years.

Dad was a real family man. I was one of four children and will always remember him as being very kind, always there to help others. In later life, he volunteered for Age Concern for over 10 years every week in Gateshead, while also caring for my nan daily. At his funeral, a co-volunteer told me he would visit an old lady who couldn’t get to the centre, just to see if she was okay. He kept active, and enjoyed walking and traveling. He especially treasured going on holiday and Benidorm was his favourite place to visit. He loved to go with Annie and visit his sisters-in-law Lily and Joan who both had caravans there.

I vividly remember the events that took place on 14th November 2015. I was working at the time, running a fitness club with my husband, Colin, and we lived happily in Ovingham with our two children, Ben and Charlie, who were 18 and 10. It was Ben’s 18th birthday, before the evening celebrations, that Dad had come over to deliver some presents, but soon he had broken down in tears. He took me aside, he was crying and extremely upset. He was convinced that he had dementia and told me that he’d been confused and disorientated.

Looking back over that period, I’m certain that there were other signs I could have picked up on. When I looked at the videos from the party I could see something was wrong. Dad seemed confused and distressed, which was very unusual. Dad was honest and loyal, always joking and there for everyone. It was unlike him to be worried.

A week after Ben’s party, Dad had his first seizure. He was sent to the Cramlington Hospital in Northumberland, where doctors performed an MRI scan and found a mass on his brain. He was referred to the Freeman Hospital and sent to the Royal Victoria Infirmary in Newcastle for a biopsy on 5th December. He was scared and in tears talking to my mam as we both sat listening to Smooth Radio in his hospital room, waiting for his procedure. The result revealed our worst nightmare, Dad had a brain tumour, an aggressive, grade 4 glioblastoma multiforme (GBM). Our world shattered instantly.

He was referred back to Dr Jo Lewis at the Freeman Hospital in Newcastle. I will never forget this meeting, when Dad asked if he would be around to see the Christmas of 2017. Devastatingly, it was not to be – Dr Lewis said he had six months to live, if that.

With surgery being too much of a risk, Dad had radiotherapy. It was traumatic for Dad and my mam was broken, he was always the one to look after us and, all of a sudden, the tables had turned. Dad was told he couldn’t drive and, for a man so proud of his independence, that was like losing a limb. The care he received was second to none, his oncologist Dr Lewis was an amazing lady, was wonderful with Dad and a great doctor. The staff at the Royal Victoria Infirmary, where Dad has his biopsy, were equally fantastic.

After his diagnosis, Dad had radiotherapy at the Freeman Hospital in Newcastle. It was devastating to learn that the tumour was too deep in his brain to allow other treatments and that there was very little the doctors could do. Surgery would have been too much of a risk.

As the cancer spread through his brain, Dad went rapidly downhill and this was so hard for us to see. Christmas 2015 was to be his last so we tried our best to make it special. I often look back at the video footage from that Christmas and Boxing Day; all he wanted was to live to see the next Christmas and to go back to Benidorm with his Annie. We nursed Dad at home with help from Tynedale Hospice at Home, Macmillan and Michelle and staff at the Burn Brae Medical Group. The nursing staff were second to none, providing specialist care with a smile, even through the night. They were all amazing and gave great support and comfort to my dad and my mam.

Dad was bedridden in his last two weeks but it was his wish to be at home and we did everything we could to make him as comfortable as possible. Dad slipped into a coma and died later that day, on Monday 11th April 2016. It was some comfort that dad passed away peacefully, surrounded by his family, had enjoyed a three-course meal and was listening to Smooth Radio just days before he went.

Dad was a huge character and he has left a large hole in the lives of everyone who loved him. There was a huge turnout for his funeral at St Mary Magdalene in Prudhoe, testament to his popularity.

I was determined to turn the difficult emotions of my bereavement into something positive. My fitness team and I have always raised money for different charities in the past, so during the first few months after Dad’s death we fundraised for Tynedale Hospice at Home, Macmillan and the Sir Bobby Robson Foundation.

When it was coming up to the first anniversary of losing Dad, I did some research online and became aware of the lack of funding for research into brain tumours. Shocked by the fact that just 1% of the national spend on cancer research has been allocated to this devastating disease, I decided to dedicate a year to fundraising for the Brain Tumour Research charity, with an aim of raising £10,000 to help fund research into the disease.

We hosted a series of events, including three auctions, three walks, a fitness day and other fundraising activities. The support I had from my friends, gym members and the local community was invaluable and we even produced a charity calendar for the cause. One of the last fundraisers we organised was the Mad March Mare in March 2017. The event was cancelled the night before due to heavy snow so we quickly organised an alternative route through Ovingham and people ran the route through thick snow. Our last organised walk was also cancelled so we arranged a shorter, alternative route around SS Fitness member Katy Pigg’s farm – we finished with a party in her barn.

Fittingly, on Father’s Day, we also hosted an afternoon tea at a beautiful house in Stocksfield. Phillipa is a wonderful lady who hosts charity tea events in the beautiful gardens of her home. The ladies at the local church prepared all of the food and we were extremely grateful to host the event for Brain Tumour Research, raising another £600.

Our local newspaper the Hexham Courant helped to raise awareness of the fundraising and soon I had requests from people I’d never met before wanting to take part. It was wonderful to see the community come together and, in talking to others, I was grateful to feel like I was less alone in my experience. I’m proud to see how the fundraising group has grown and how dedicated everyone is. One fundraiser, Stew Armstrong, was joined by his brother Richie and together they completed the gruelling Total Warrior Event.

In all, we have raised over £11,000 for Brain Tumour Research – smashing our original target. It was an amazing team effort that made me realise we could do anything if we put our minds to it. I am proud to have raised money and awareness for the charity and to have brought together a group of people in my local community who have been affected by the dreadful disease.

My dad was the best man ever and nobody could ever come close to him in my eyes. I miss him so much. I know he will be proud of our fundraising, especially of my mam walking the Hadrian’s Wall and through deep snow. We will continue to raise awareness and funds and hope one day to find a cure. God bless Michael Shane, forever in our hearts. 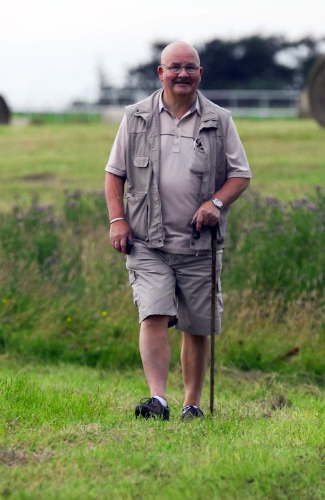