Mark fought and lost a 16 month battle with a brain tumour, leaving his extended family and many friends, particularly from his life as an outstanding martial artist, utterly devastated.

“Every minute I looked after you throughout your illness was an honour and a privilege, Mark.  You were an inspiration to all of us as a son, a brother and a father.  Rest in peace, mate.  I miss you.”
Mark was my older brother.  We were very close.  People thought he was my twin.

When he had a pain in his head, I had one too.  When we were boys and in different schools, we both broke two bones in the same arm on the same day and both ended up in the same hospital.

In May 2005 Mark was diagnosed with a grade II brain tumour having collapsed with a fit while training – he was an outstanding martial artist and an instructor.

A subsequent biopsy left Mark without the use of his right arm and leg, but he continued to work as a Royal Mail postman, delivering mail while dragging his right leg behind him, refusing to ask for any help or special treatment from his employers or work colleagues.

At the same time, Mark would often turn up at his local Martial Arts Academy in Stockton to advise students and instructors alike.  Everyone could see how disappointed he was that he couldn’t join in and train or teach.

Not once throughout his illness did anybody hear a single word of complaint from Mark.

There was no “why me?” or “I don’t deserve this”; he continued to be the positive person he had always been and would say “I will get over it.  I’ve just got a head-ache.”  He still continued to believe he was winning the battle and was adamant that he would be doing the 2007 Great North Run.

As he deteriorated further, I packed up work and became Mark’s carer.  As time when on, he became very weak and tired and unable to speak or feed himself.  Towards the end of his life, Mark was bed-bound practically permanently, first at home and then in a care home.  To me it was very difficult to see a man of such fitness and athleticism degenerate in such a way.

During his various spells in hospital, Mark would often go into a deep sleep which could last up to 20 hours and from which he could not be woken.  I can remember four different occasions that our family were told he would not survive the night, yet on each occasion we would maintain a bedside vigil, only for Mark to wake the next morning, asking where breakfast was.

Mark died in October 2006 leaving all his family, including his own two children who were just one and four years old, as well as his many friends, utterly devastated.  So many people paid tribute to him.  Mine is simple: “Every minute I looked after you throughout your illness was an honour and a privilege, Mark.  You were an inspiration to all of us as a son, a brother and a father.  Rest in peace, mate.  I miss you.”

I have now set up the Mark Cogan Trust to raise funds for Brain Tumour Research and to keep his memory alive for his young children. 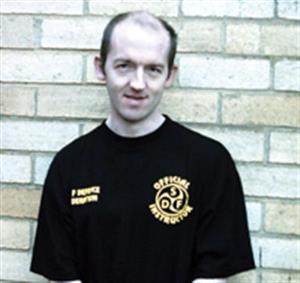