Louise Hudson was diagnosed with an astrocytoma brain tumour at the age of 26. She continued to live alone in London near her beloved Camden for a number of years although she became increasingly unwell. During the final weeks of her life, Louise moved into her mother Susan’s home and spent her last days surrounded by friends and relatives with the family cat sleeping beside her. Louise underwent gruelling surgery and radiotherapy and survived a relatively long time before losing her battle ten years after her diagnosis.

“Although she was very ill, Louise was extremely active and it was hard work. After a while, we made up a bed for her downstairs and she was able to enjoy the sunshine, looking out into the garden and sometimes lying outside on a sunbed. The cat took to sleeping on her bed and lots of her friends would visit; sometimes there would be a party atmosphere.”
Louise’s mother Susan tells her story …

Louise was born on 21st May 1974. She was very bright and did well at school. She loved dance and music, taking ballet classes and playing the cello. She went to Rook’s Heath High School, South Harrow, and did well in her A levels. She was keen to study law but instead of going to university, she got a job as a clerk at the Holborn law firm Reynolds Porter Chamberlain. She began training as a solicitor but decided to go travelling to Australia where she had a wonderful thing and did things like scuba diving on the Great Barrier Reef. I even got the chance to meet her in Cairns and we went on a hot air balloon trip.

On her return to London, Louise got a fantastic job with Reuters but in 2000 we first realised something was wrong. Louise had a seizure in her sleep and soon we were to receive the devastating news that she had a brain tumour – an astrocytoma.

We were told that some people with these tumours did quite well while others didn’t; we would be fortunate if Louise lived until she was 40.

At first, the tumour didn’t seem to affect her very much but later she had difficulty remembering names and problems handling numbers. She underwent neurosurgery twice and had radiotherapy which was punishing and left her very tired. There was a stage when Louise realised the brain tumour was going to kill her.

She started to lose her peripheral vision but was reluctant to use a white stick. The tumour’s location meant Louise lost many inhibitions and often acted in a strange way. Once she marched onto a film set as she recognised one of the actors and wanted to say hello. Another time she went shopping in Oxford Street and bought three handbags which I had to take back the next day. On the other hand, when she was in hospital she was extremely caring to other patients and staff and I would people would say how wonderfully kind she was.

While Louise continued to live in London I visited her often and took her to all the hospital appointments, and other relatives helped to ensure she was OK. The year before she died, Louise was delighted that we were able to have a two week holiday in Greece and loved the time she was able to spend lying on the beach. Looking back at a photo of her, you can see she is not well and that her face has become distorted.
By now I had retired from nursing and was able to look after Louise. She continued to live in Tufnell Park near Camden and loved that area of London.

However, in the summer of 2010 I was told that Louise didn’t have long to live. She left behind the city she loved to come home with me to Sarratt, Hertfordshire. After a while, we made up a bed for her downstairs and she was able to enjoy the sunshine, looking out into the garden and sometimes lying outside on a sunbed. The cat took to sleeping on her bed and lots of her friends would visit; sometimes there would be a party atmosphere. As an occasional treat, I would take her in her wheelchair to Café Nero.
One of Louise’s family favourites, Aunt Janet, came to live with us during the last few weeks.

Louise had beautiful blonde hair and she was keen to have it styled. One day in June 2010, despite her extreme discomfort and being almost unable to stand, we took her to the Toni & Guy salon in Watford. I am so pleased we were able to do that. The next day Louise didn’t want to get up. Her sister Victoria and I stayed with her. She died that night 26th June.

Through my nursing, I had experience of other types of cancer but knew nothing about brain tumours. It was such a shock to learn that brain tumours kill more children and adults under the age of 40 than any other cancer … yet just 1% of the national spend on cancer research is allocated to this devastating disease.

Louise’s funeral service was wonderful, it was packed. Among those who carried her coffin were our 14-year-old grandson and Louise’s school friend Leon Hall.

Just three days after the funeral, Louise’s sister Victoria and cousin Liz completed a 10k run to raise funds for a charity which was set up following the loss of another young woman to a brain tumour.

Following the service, Louise was cremated and her ashes were placed in a small garden in the churchyard. I visit regularly, taking her favourite white flowers. On special occasions such as birthdays and anniversaries, a group of us go there to remember her.

Some people think that, given time, you get over something like this but you never do. 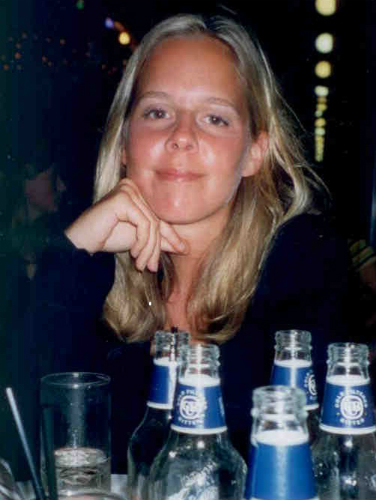