In 2004 when Louis was just four years old he was diagnosed with leukaemia.  We had sometimes noticed unexplained bruising and his skin often appeared quite yellow, but the GP had reassured us he was probably slightly jaundiced.  Then Louis collapsed and we took him to A&E where they discovered he had leukaemia.
Louis endured several kinds of chemotherapy along with lumbar punctures, smiling all the way through.  After about two and a half years he was in remission for a couple of months and we thought he had beaten the disease. Then, in 2007, we were hit with the devastating news that Louis had suffered a relapse.  He went on to endure a bone-marrow transplant the following year, suffering graft-versus-host disease (GVH) when the body rejects part of the transplant.  He was put on a maintenance dose of penicillin which we were told he would have to take for the rest of his life.

In 2010, two days before starting a new chapter at a new school, Louis was involved in an accident.  He was on his bike on the pavement waiting to cross the road when an HGV lorry came around the corner and mounted the kerb, dragging Louis under the wheel. His leg was severely crushed and he lost a lot of muscle and tissue.  By this time we really thought Louis had had more than his fair share of bad luck.

Then, in 2011, along came Gavin, a new man in my life, who Louis adored. We really thought life was turning around as we wed in 2012. Louis was in charge of the wedding rings and felt so important. He continued to have amazing contact with his father Dean and we all had a unique bond due to Louis. Sadly my Grandad, Lou's Great Grandad passed away two weeks before the wedding. Then the following March we lost another special person – my Nan, Lou's Great Nana.  We were struggling with the reality until we found out we were expecting.  Louis was over the moon he was going to be a big brother. He came to the scans and midwife appointments with me. He was so excited.

Our rollercoaster of emotions was to continue, however, when at the end of September 2013 Louis was given the all clear from cancer as the transplant was five years in and his body had accepted it. Such fantastic news! My boy was free and we could enjoy a normal life with a new baby on the way.

Two weeks later we were dealt another devastating blow.  Louis was diagnosed with secondary cancer – a brain tumour.  He had been suffering with headaches and I had a call to pick him up from school because he was experiencing light sensitivity and couldn’t eat or drink.  I took him home to bed and gave him paracetamol and plenty of fluids, as advised by the GP.  Louis became progressively worse and by the third day he couldn’t get out of bed.  He was taken to A&E and, because of his history, the first thing they checked was whether he had a brain tumour.  I was at home on my own, heavily pregnant and feeling quite ill, when I received the terrible news over the phone that Louis now had a brain tumour.

Louis had a biopsy and we were told that he had a glioblastoma multiforme grade IV.  We were completely oblivious to what that meant, but the doctors were very bleak about it and it was apparent that they had written Louis off straight away.  He was just a statistic, not a boy.

It was absolutely heart-breaking.  Louis had just turned 13 and had spent most of his life in hospital – to him hospital was a safe haven, a sanctuary.  We had always been honest with him so now we told him that he had a cancer in his head but that we were going to stop this one like we had done before with the leukaemia.  Louis accepted it just like he had accepted everything in the past.

We had no help, however, from the doctors who told us that the median survival was a year.  I had to fight and kick up a fuss to get him any treatment at all – all they could offer was radiotherapy and temozolamide. He was refused a clinical trial of Avastin because he did not meet the criteria, as they wanted patients newly diagnosed with cancer.  I challenged everything and wanted to get him on a trial for Avastin.  After much discussion the hospital then decided to trial it themselves for us.

I was desperate to save Louis so decided that the only option was to pay for Louis to have a second opinion privately and to work with alternative therapies and treatments that might give him a better prognosis and ensure a better quality of life.

He was supposed to be starting a trial at Great Ormond Street Hospital and had to give a large tumour sample before it began. I made a decision to have the baby induced at 37 weeks so that Louis and he could meet as soon as possible, hoping also that his arrival would be Louis's focus to stay strong.  Also my body could no longer cope with the stress.

After the big biopsy, Jesse was born and Louis was still in hospital.  He fought with the doctors to come home and meet his brother. They were so surprised by his strength and determination; he came home to meet his brother and then had to go back to the hospital. Two days later on 11th November 2013, due to a remarkable recovery, Louis was discharged.   He got to hold Jesse and fall in love with his brother, even getting up in the night with me for feeds.

Louis had been sent home with a weaning dose of steroids after the surgery, but after the final dose, he started to slur his speech and then he couldn't move his body. He suffered a stroke.  It was awful.  Louis became incontinent and had to rely on us to go to the toilet. The most tragic thing for Louis was he could no longer hold his brother properly.

We were also still waiting for radiotherapy to commence, but the doctors kept on stalling.  We took Louis back to Nottingham for an appointment with his consultant, but the consultant did not show up, even though he had called the week before to remind us of the appointment.  We ended up with another doctor who told us we needed to start chemo straight away and said she would push to get a start date as soon as possible for radiotherapy.

It was so difficult and we were so tired having to carry and lift Louis who by now was suffering with chest pain and having to take medication for fits too.  On top of this I didn't have the time necessary to bond with my new baby Jesse whose care at this time was being split between his grandparents, myself and Gavin.  At one point I had Jesse, who was just four weeks old in the Leicester Royal for an eye infection and Louis at Nottinghams Queen’s Medical Centre for his treatment.

On Christmas Day, Louis was screaming in pain with his chest.  In Leicester Royal Infirmary he had lots of scans, but we were told nothing, apart from that he had pneumonia.  I suspect he had had it a while.  The doctors said that this was potentially the end.  I wouldn’t let the nurses care for him so we did everything for Louis. Louis lost a lot of faith in the hospitals and the only people he would trust and work with were Dean, Gavin and me.  We became his physios, his personal carers, his support and his belief system.  We worked 24/7 to do everything we could.  We even got him off the oxygen which amazed everybody in the hospital.

Louis then had a general anaesthetic to have a portacath fitted (an inverted Hickman Line) but this led to sepsis which in turn led to his bone marrow stopping doing its job; there had to be a call put out for bone marrow stem cells.  My mother went to London because I had discovered a Chinese treatment which might help to boost his natural killer (or NK) cells and potentially stimulate what little cells he had left. The doctor was in support of us doing this as he understood how much we were willing to sacrifice.

All the time, Louis continued to fight, even though his body was giving up.  Incredibly, he was laughing and joking right up until the last 48 hours when he was too drugged on his medication.  Not long before the end I remember lying on the bed with him seeing his eyes open while he was convulsing.  I pressed the emergency button and they pumped him full of midazolam to stop him from fitting.  He finally calmed down, but within minutes he had gone. His Dad, his step-Dad and I were all there together, holding him.

Louis’s funeral was amazing.  We had a Harry Potter theme and everyone dressed up – friends and family alike. We had a crowd of well over 350 people and Louis arrived on Hagrid's motorbike.  We celebrated the life of someone who was totally unique.  Louis had kept us strong, rather than us keeping him strong.

Jesse now keeps me focused and grounded.  He looks a lot like his brother and is such a blessing.  It’s like he’s meant to be here.  I can’t wait to tell him about his amazing big brother.  And for us the fight still continues as we try to raise as much funds for research as possible and help other families get the help and knowledge they deserve. 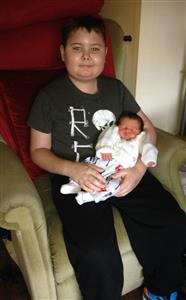