Having finished a highly decorated career in education, Lesley Kirby-Klappholz was looking forward to her retirement. Her professional life had spanned a long but enjoyable 38 years, which included 11 years of headship. However, devastatingly on 31 May 2019, Lesley was diagnosed with a brain tumour out of the blue. Three weeks later the diagnosis was compounded, following a biopsy which distinguished her tumour type as highly aggressive.

Here is Lesley’s story, as told by her son, Oscar…

After a career dedicated to educating and inspiring future generations, Mum had planned to spend her well-earned retirement travelling the world with friends and family, supporting her elderly mother and raising grandchildren. She retired in January 2019 was looking forward to enjoying all of the freedoms that are typically associated with that period of life. Mum was a linguist; a modern languages teacher who worked her way up to the top of her profession to become a headteacher. She was astute and so we knew something was wrong when, in late April 2019, we noticed her memory was starting to go. She went to the GP and was told it was probably down to the fact she’d recently stopped working. She had gone from having a really busy, responsible role to a much quieter schedule. We accepted the initial diagnosis but there were real moments of fear, as her memory continued to deteriorate and we wondered whether it might be early-onset Alzheimer’s disease. Mum was a very proud person but she was also pragmatic and so, quite sensibly, she went back to the GP three times, desperately trying to get to the bottom of her forgetfulness and change in character.

“She must’ve known something was really wrong but the doctor made her feel like she was being a hypochondriac.”

On her fourth trip back to the GP’s surgery, she demanded a CT scan. I had no idea this was going on at the time. Then, one evening, I was out for dinner and I got a phone call from my dad to say she had been diagnosed with a brain tumour. At first, I thought it was some kind of sick joke. When we realised it was genuine, my brother Tobi and I went to visit her the next day. She was so upbeat and positive. True to form, she busied herself with spellchecking Tobi’s website for his new business. She seemed fine but as we left, I managed my brother’s expectations. I was aware of the seriousness of the situation and I think she was too; Mum’s intuition was incredibly sharp. 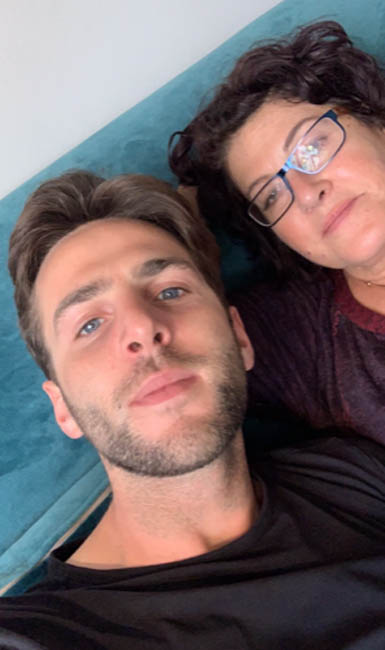 Mum was initially diagnosed at West Middlesex University Hospital in Isleworth, west London, then subsequently transferred to Charing Cross Hospital in Fulham. Tobi and I accompanied her to her first consultation with her surgeon and the rest of the multi–disciplinary team (MDT). Naively, one of our main concerns at this point was that the brain tumour may have been secondary cancer, which had spread from another part of the body. We were reassured that this wasn’t the case and over the course of an hour or so, they talked us through the next steps with a great deal of confidence and rationality. Their inclination was that it was grade 2 tumour, around half the size of a golf ball and, because of its location, they were positive that they would be able to remove it.

“We went away feeling cautiously optimistic, heading off to enjoy some family time at Westfields Shopping Centre, where we watched the movie Rocketman and had an amazing time.”

Mum’s debulking operation was scheduled to take place 3.5 weeks after she received her diagnosis. She was given steroids to try to prevent it from swelling. The effect of the medication and the tumour itself ebbed and flowed. The weekend before she went into surgery, we went for a walk around the park. She seemed really down; like she had the weight of the world on her shoulders. In spite of the down times, we all remained positive, as the date of the operation approached.

“On 18 June, the evening before she was going into theatre, however, we were delivered a sucker punch from the surgeon that none of us were remotely expecting.”

He told us it had spread and was now a high grade, butterfly-shaped glioblastoma multiforme (GBM). Apparently, it had been discovered quite far down the line and was now progressing really quickly. We were horrified. For the first time ever, Mum seemed really depressed. We had all put our faith into the confidence displayed by her surgeon at the consultation. He had said, ‘this is going to be difficult but you’ll recover’. Now we were looking at palliative treatment. At best, they would only be able to remove part of the tumour because of its size and spread. The aim of the surgery was to relieve the pressure in her brain. There would be no cure. In spite of her despondency, we managed to distract ourselves and together we watched the Tory leadership debate on the TV. Mum, a staunch pro-European and liberal, was as passionate as ever as she shouted at the screen: “I don’t want Boris to be my Prime Minister!’

“The surgery was a complete catastrophe. We were told it would take between four and five hours. Tobi and I went off to play tennis and came back. After seven hours we had heard no news and kicked up a massive fuss.”

It became clear that the surgery had gone wrong. She had suffered a major haemorrhage and contracted a virus. Mum came out of the operation completely comatose. We were told she’d have 24 hours to live. We were distraught.

“Not long afterwards she was back under the knife for a second operation, this time to insert a shunt to relieve the pressure in her brain, caused by the bleeding.”

After a week of her being in a semi-conscious state, we began to have some amazing moments, when she would open her eyes and look around the room. They provided us with small glimmers of hope in the darkest of times. We brought in pictures and candles and recorded videos with her. The medics were gobsmacked at the fight she was putting up. Her body was incredibly healthy. Eventually, though, she started to decline again and 14 days post-surgery they told us she would never recover. Up until this point we hadn’t discussed what we would do, if faced with this desperate situation. Mum hadn’t prepared either; she certainly didn’t she think she was going to die when she went into theatre and hadn’t written a will or discussed anything like that with us. We talked about what would happen with the medical team and they told us once they ‘cut the cord’, she wouldn’t live longer than two hours or so. Forty-eight hours later she was still fighting. My brother stayed overnight. I was exhausted, so I went home to get some rest and the next day, I came back and she was there, still going and going. Two hours after I left on that day, 8 July 2019, we got the call to say she had died. Her heroic fight with this awful disease had ended. Going to see her in the morgue the next day was one of the most difficult things I have ever been through.

“Mum’s funeral took place on 26 July at Mortlake Crematorium in Kew. It was a double slot, as so many people wanted to come and pay their respects, many of them also speaking publicly about the affection they held for our adored mum.”

A recurring theme in the funeral speeches and one of the defining features about Mum was her pragmatism. Her no-nonsense attitude was one of the motivating factors for our decision, as brothers, to sign up to run the Virgin Money London Marathon in April 2020. We want to do something positive to channel our grief and, in doing so, raise money and awareness for the amazing charity Brain Tumour Research. When we were sorting through Mum’s paperwork after her death, we discovered that she was a regular giver to a number of different charities. We are doing the marathon in tribute to Mum and her charitable nature. It is one last, small thing we can do in her honour and to honour others suffering this horrific disease.

“We set a fundraising target of £10,000 and have nearly achieved that, even before reaching the start line. Our large network of friends, family and colleagues have been touched by Mum’s powerful story.” 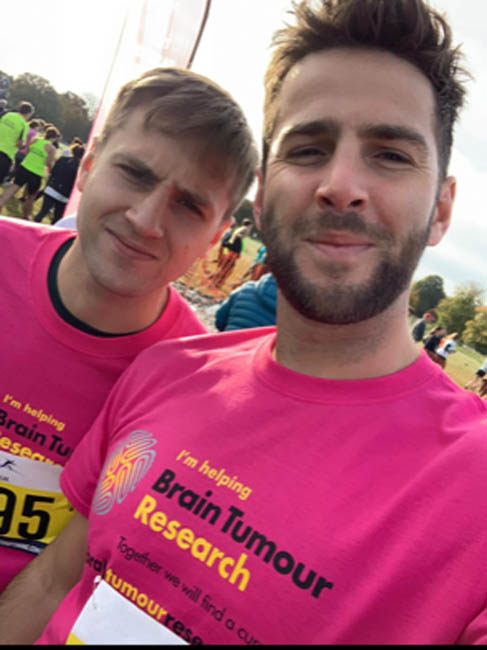 This disease rips through families unequivocally. Like many others with this diagnosis, Mum’s decline was rapid and her catastrophic fate almost inevitable. The statistics for GBMs are shocking.  The average survival time is devastatingly short – just 12-18 months. Only 25% of glioblastoma patients survive more than one year and 5% of patients survive more than five years. Having experienced this relentless cancer first hand, Tobi and I believe that more needs to be done to provide greater understanding and treatment for future generations. At the current rate of funding, it will take 100 years for brain cancer to catch up with developments, that have been made in treating other forms of cancer. These statistics are damning and will not change without increased investment into targeted and dedicated research.

We are so grateful to everyone who has donated to our marathon fundraising so far. We appreciate every donation, however large or small, which is helping support the fight against this horrible disease and of course to remember our mum, Lesley; a selfless, shining light in our society.

If you have been touched by Lesley’s tragic story, and would like to know more about our lobbying, research updates and fundraising opportunities, please sign up to our weekly e-news. 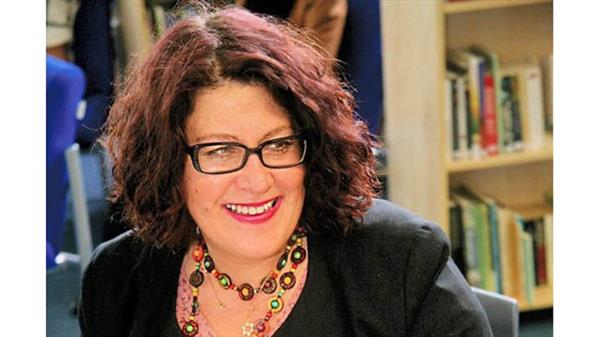