Dad, or JV (as he was always known), found out he had a grade IV glioblastoma multiforme in his temporal lobe on his birthday and two weeks before his eldest daughter was due to get married.  Just over a year later, his immediate family were all present when JV died.

“Mum is overwhelmed with the amount of help she is now receiving from the local community since my father’s death.  She and Dad were one of the first Indian families to settle in Bristol.  Everyone is doing as much as they can to fundraise so that ultimately a cure can be found for brain tumours and so that other families will not have to endure watching their loved one deteriorate and die like we did.”
Dad was a healthy man and a brilliant driver who was never ill but, during October and November 2008, we noticed he was exhibiting flu-like symptoms. It started with him having mild headaches and wanting to sleep more in the day. Then, one day, he was driving and his peripheral vision must have been impaired because he nearly knocked over a passer-by who was crossing a car park.  Subsequently, he started having awful headaches which got so bad he wanted to sleep the whole time. He tried paracetamol but the pain just would not go away.  The headaches were more severe in the mornings.

On the morning of 11th December 2008, he had a violent headache and vomited severely, which was very unusual.  Mum went to see our family doctor, who said he should go to hospital immediately.  We took him to Frenchay Hospital in Bristol, which specialises in neurosurgery, where Dad had an MRI scan and was admitted straight away.

Our family arrived at the hospital and awaited the scan results.  When the doctor walked in and drew the curtain around us, we knew instantly that something out of the ordinary was wrong.  He explained that the CT scan showed there was swelling of the brain which was either an infection or cancer. The news of this completely floored my family.  We had to return home and await news of whether it was accumulated only in the brain or if it had spread to the brain from the body.

We were phoned at midnight that evening and told that they needed to operate immediately because the MRI scan had confirmed that he had a mass in his brain which had started and remained there. Dad wanted this “thing” out of his head so much that he had signed the papers himself so they could operate on him the following morning.

After nine hours of surgery the following day, we found Dad enjoying the morphine and really happy that the pain had gone from his head.  The tumour had been the size of a small plum and we were informed that it had probably been growing for a matter of months, causing intense pressure on the brain.  We were told we would have to wait a few days for the results of his biopsy, but in fact it ended up being a week and the day we got the diagnosis, it happened to be Dad’s birthday and two weeks before his eldest daughter was due to get married.

That day, we knew something was terribly wrong because the doctor and consultant advised us that everyone should go into the room. They then gave us the diagnosis that Dad had a grade IV tumour (glioblastoma) in his left temporal lobe with a prognosis of up to two years.  We were all stunned, in absolute shock, and crying.  Was this to be his last birthday?  My dad was only 56 and that was too young an age to die.   My Dad’s reaction to this was the most reflective for us all – his response to the prognosis was:- “if it’s my time to go, then it’s my time to go.  I could have died suddenly in a car crash but at least I have a couple of years.”  You can see from this that JV was a very positive man and always had a ‘live for the present’ mentality.  We started to think of all the things we could do in the time Dad had left.  He took the attitude that although things were not great, at least he had a few years to try to do whatever he chose.

His eldest daughter was due to have a civil wedding in the UK two weeks later on 4th January 2009, followed by an Indian wedding straight afterwards, but as Dad couldn’t fly for three months, having undergone brain surgery which prohibits flying for that amount of time, we rearranged the Indian wedding to April that year.  Dad spent all this time practising his dancing and was really happy and positive.  We had a good Christmas with family over from India and USA and the wedding went well, albeit very emotional.

JV started his radiotherapy and chemotherapy at the end of January 2009 which lasted six weeks and then had the Temozolomide treatment.  He continued to eat well, doing quite a bit of walking, mowing the lawn and working in the family business. The side effects were hair loss and mild sickness.

In March that year, his neurosurgeon gave him approval to go to India, so the wedding in India went ahead in April, which my Dad was over the moon about.  While we were in India, Dad needed no medication, so this was a positive sign for us.  He subsequently had an MRI scan in June, which showed that the tumour had not re-grown, and JV was overjoyed again.  In June/July however, the headaches returned.  It was a real blow – we knew it would come back, but had hoped it would not be so soon.

By August, Dad was suffering with dizziness and when he went walking, he had to stop and sit down, although he did manage to go to London to watch a cricket match which he loved.  We also noticed that at times he would react irrationally and was forgetting things more. He was becoming very moody and slightly disorientated.

We saw the neurosurgeon for a follow up appointment in September after a scan which revealed the growth of new cancerous cells by around 10-15%.   It confirmed what we had suspected - now we faced the dilemma of whether to undergo another operation, which would be very risky (particularly in terms of orientation and memory) or go for a new type of chemotherapy. After advice from the doctor, we decided to try an intravenous type of chemotherapy.

From October, Dad had difficulty with daily things and was sleeping so much more.  We also made the choice at this time that we wanted JV to be cared for at home and not in a hospice as we wanted to take care of him up until the day he died.

In November, it was a family member’s birthday and Dad, who was normally so meticulous about his appearance, put on his clothes inside out with his belt undone.  We knew something was very wrong and things were getting worse. As the tumour was growing on the left hand side of his brain, it started to reduce the sensation in the right hand side of his body.  One day he lost his footing and then, over the course of a month, he was unable to walk around without help. He was becoming more bed-ridden and started to rely on a wheelchair we had been given by the Red Cross.

The NHS was amazing and provided an electronic bed similar to the ones they use in hospitals and the local council built a bathroom with disabled facilities.

Dad had two rounds of the new chemotherapy, but unfortunately it did not work and we were told they could not operate again.

We decided to call family in India and USA to tell them it was time to come over before Dad got to the stage when he would not recognise people.  There were lots of friends and family visiting in December and lots of celebrations – it was Dad’s birthday again and Christmas.

We had kept a video diary during the time of Dad’s illness - it was full of so much emotion and some very good times.  We let him enjoy himself, drink as much beer as he wanted and eat anything he fancied.

By the end of December, JV was sleeping 20 out of 24 hours and needed help with everything.

The results of a scan in January were not good.  The tumour had spread - he had two weeks at most to live.  This was the first time Mum had a concrete deadline, although the rest of us were prepared.  Mum looked at Dad and said that she thought it would be about a week.  We were given the medicines he would need, including morphine, for the local nurse to administer when that time came.

On the evening of 19th January 2010, we all had a great conversation with Dad, who was eating his dinner and laughing.  The following morning at around 9am, he asked my mum for some tea, and then his breathing became raspier.  We called the nurse who administered pain relief and we were told that it was only a matter of 24 hours.  We then decided to call all his close friends and family and everyone visited one after another, squeezed his hand or stroked his head, not believing what was about to happen.  Then we felt Dad going cold and a nurse friend told us she could not find his pulse.

In his final moment, we had our immediate family around, and not realising it, he took his final breath.  He died 3 hours after we had called the nurse. To say we were devastated was an understatement.  It makes no difference to be told how much time he had left or even whether a loved one is going die - nothing can prepare you for the pain when you see the moment arrive.  Dad was so young and he had so much more to see of life and more time to enjoy with his family and friends – we all could not believe why he had to be taken away from us at such a young age, but I guess that there is never a good time to go.

So many people were affected by Dad’s death. He was very well known in the Indian community in Bristol.  We own a shop in Bristol and have had it since 1983. His loyal customers sent dozens of cards and flowers, as well as donations to Brain Tumour Research, and when the hearse passed the shop on the day of his funeral, there were hoards of people standing there to pay their respects.  A Brain Tumour Research donation box also sits in our shop and it is amazing how much people still donate.

Mum is overwhelmed with the amount of help she is now receiving from the local community since my father’s death.  She and Dad were one of the first Indian families to settle in Bristol.  Everyone is doing as much as they can to fundraise so that ultimately a cure can be found for brain tumours and so that other families will not have to endure watching their loved one deteriorate and die like we did. 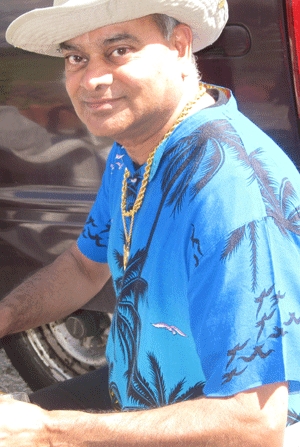