We are grateful to James and his wife, Nicola, who worked with us in August 2020 to share his story here. Sadly, he passed away in February 2022. We remember James as we continue our work to raise awareness of this devastating disease and to fund research to help find a cure. He will be forever in our hearts.

The first indication that anything was wrong was when James, a doctoral researcher and associate lecturer at the University of Plymouth, had a nocturnal seizure. It led to James, who had completed a tour in Afghanistan with the Territorial Army (Rifles), being diagnosed with a grade 3 anaplastic astrocytoma brain tumour aged 29, which developed into a glioblastoma multiforme (GBM) nearly five years later.

James and I met as undergraduates at the University of Plymouth in 2006 – we were both on the same International Relations degree course and were in the same friendship group as First Years. James opted to take the last year out and do a tour in Afghanistan with the Territorial Army, before returning to do his final year. While he was away, I sent him letters and Jaffa cakes! It was on his return that we became a couple.

In 2015, James was reading for his PhD at the University of Plymouth. One early morning in March of the same year, I came home from a Pilates class to find James had knocked the washing over, left many of the kitchen cupboards open, and thrown my socks in the bin. This wasn’t some attempt at trying to turn me into a barefoot hippy – I’m already one of those at heart! We assumed he had been sleep-walking, which he had done before, and, thinking no more of it, we went out to lunch with a friend. 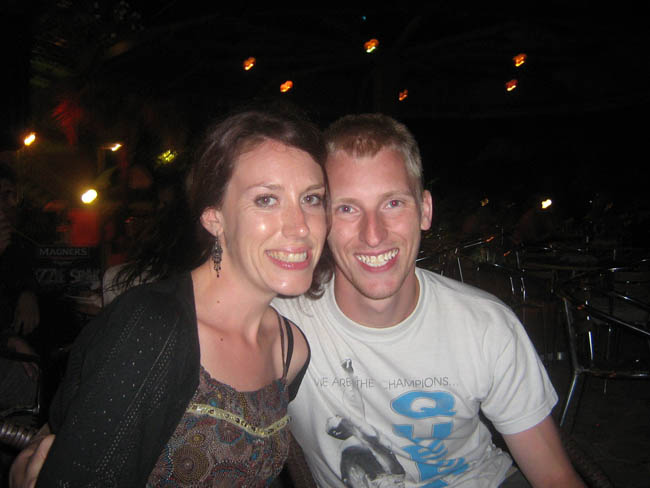 In a conversation, I mentioned that we had been to an appointment the day before, but James seemed to have no recollection of it, despite him driving for three hours there and back. Something was clearly up, but we just put it down to him having a bad cold and working too much. The following month all became clear…

On 20 April, I woke to find James having a seizure on the floor. Thinking he may have been having a stroke I called an ambulance, and he was taken to hospital where we were told he needed an MRI and must no longer drive. After some checks, we returned home. At first, we put the seizure down to too much caffeine and the umpteen undergraduate essays that James had been diligently marking the day before.

“But over the course of the week, James started to have moments when he would appear vacant and lose his power of speech, although he was fully aware. He felt like he was going into another room in his brain that he wanted to escape from.”

This was disconcerting for us both, and to get the measure of what was happening I used to ask him basic arithmetic to see if he could comprehend and give an answer. By the weekend, these episodes had increased in frequency.

We are lucky that James has an exceptional group of friends from his service in the Army with The Rifles (formerly cap-badged the Devonshire & Dorset Regiment). One of these friends is a paramedic and he took us back to hospital where James had a CT scan. It was 3am when we received the news that James had a 5.7cm tumour in his right frontal lobe. We named it Kenneth. 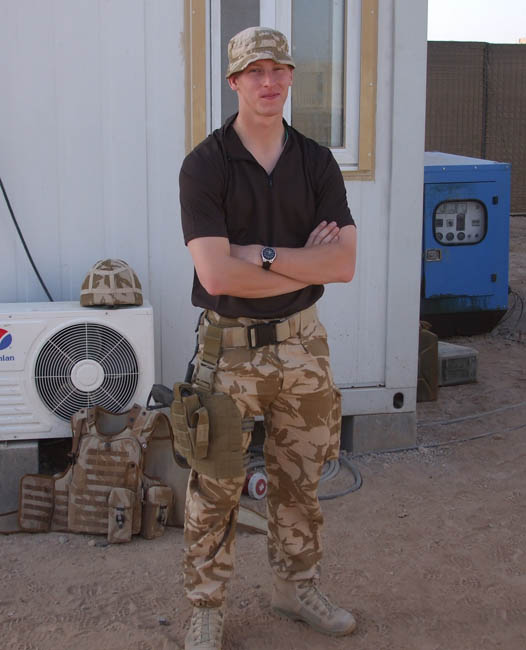 This was obviously a huge shock for us both and something we never suspected. During the previous week, unable to sleep, I had been looking James’ symptoms up online and was convinced he had some kind of neurological condition.

“Despite losing my beloved Nanny Joy to a brain tumour three years earlier, the idea that it was happening again had not crossed my mind. Strangely, having a brain tumour wasn’t the only thing both Nanny Joy and James had in common. They also shared the same birthday, 14 October.” 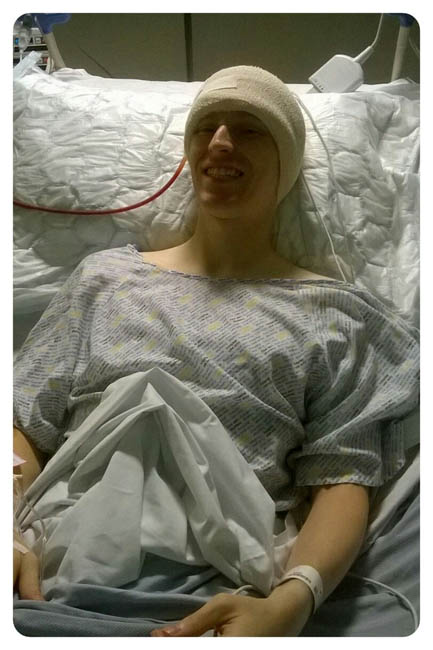 In July, the same year, James, just 29, had a successful awake craniotomy at Derriford Hospital in Plymouth with Kenneth the brain tumour being evicted. The pathology of the tumour revealed that it was a grade 3 anaplastic astrocytoma – a high-grade cancer, with a prognosis of 3-5 years before recurrence. This was something of a shock because first predictions suggested a less aggressive grade 2 glioma. As part of the BR14 trial, James had follow-up radiotherapy and concurrent chemotherapy daily for six weeks, followed by a further course of chemotherapy lasting a full year. He coped incredibly well with the treatment and took it all in his stride.

In 2016 we got married in a small, perfect ceremony in Malta, where we had previously spent a couple of wonderful holidays, whilst James was still on chemo, and were joined by around 20 immediate family and close friends. 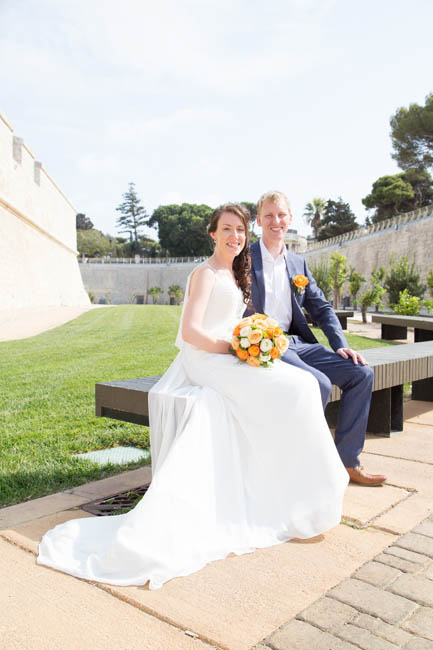 James was being monitored with three-monthly MRI scans, which was always a nerve-wracking time with plenty of ‘scanxiety’, as it is referred to by the brain tumour community. Despite Kenneth’s appearance in our lives, James went onto complete his PhD in International Relations and I am extremely proud of his passion, tenacity and determination.

However, in December 2019, our lives were turned upside down for a second time. A routine MRI showed recurrence of the cancer, despite the fact that James hadn’t noticed any new symptoms. Kenneth Junior was evicted in March 2020 and we were lucky enough to have the same fantastic surgeon and anaesthetist team.

This time around it hasn’t all been plain-sailing though. Post-surgery James lost the use of his left-side, which has since thankfully significantly recovered and the biopsy results showed that the cancer has advanced to a grade 4 glioblastoma multiforme (GBM), the most aggressive type of brain cancer.

The news has been devastating to us. GBM has a shocking survival prognosis with the average from first diagnosis being just 12-15 months. As James received radiotherapy back in 2015, it is no longer a viable treatment option for him without the risk of significant harm. Alarmingly, his post-op MRI in April revealed regrowth already. 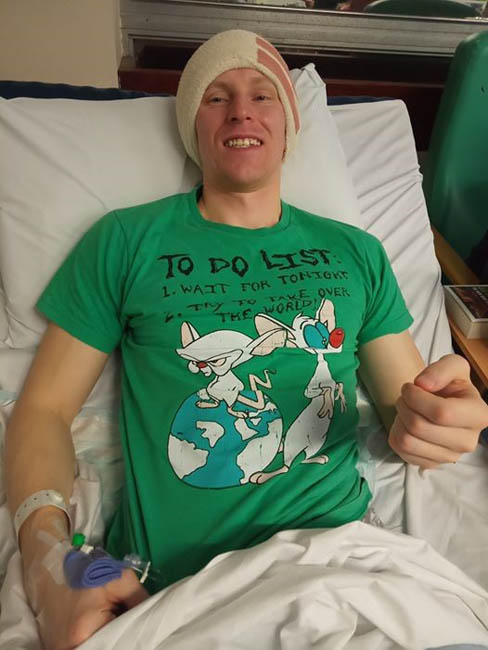 We cannot believe what we are facing and the recent Covid-19 lockdown has made things even harder to process.

“My James is witty, intelligent, kind-hearted and fiercely loyal. We are at the start of our married lives and careers, but instead we are seeking every possible treatment option we can to keep him alive.”

When James was first diagnosed, he told me that the two most important things on his bucket-list were to make me happy and to complete his PhD. He has achieved both of those things, but at just 34 years old he has so much more to give and to live for.

We would have liked to have had children, but I don’t know whether we’ll have the opportunity, even though James did freeze his sperm when he first had treatment. We wanted to wait until we had finished our doctorates, but now that we have, the cancer has returned. It feels like life’s timescales are against us, as well as being a bit of a moral conundrum considering James’ poor prognosis.

Ever since we found out that James had a brain tumour, he has been very matter of fact about his situation and just gets on with it, never wallowing in self-pity. Everyone says he’s so brave and always displays such good humour. I’m the one who gets really anxious.

I worry about how the tumour will affect him and whether he will have personality changes. He is looking so well at the moment, having recovered from his surgery in March, that few would know he is ill.

“I can’t imagine him coming to the point when he’s going to die or even be really sick, but I do understand that it is incurable.  I hope he’s one of the rare long-term survivors, but the cards are against us. We find the uncertainty difficult.”

James wants to make sure I am alright in the future and had already written his Will two months before his recurrence. He wants to ensure I have another happy chapter in life, after him. 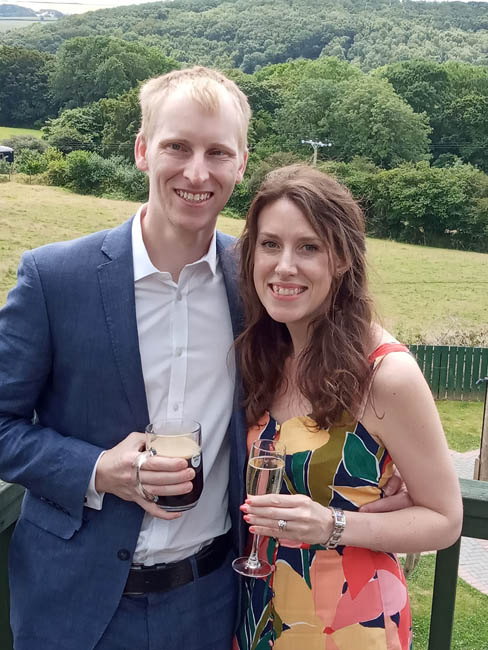 James would enjoy a hands-on career, but we know that there are certain things now with his diagnosis that he will never be able to do career-wise – like be in the military or the police. James didn’t get his driving licence back for two years after his first craniotomy and now he has lost it again. These practical difficulties are frustrating for him.

Through the NHS, James is currently receiving palliative chemotherapy every month, but GBMs are notoriously resistant to such treatments. He is also undertaking various private treatment protocols, including supplements and repurposed drugs thought to disrupt the metabolic makeup of the cancer cells, which we access through the Care Oncology Clinic in London.

“We are now seeking immunotherapy treatment options to keep James alive and well for as long as we can. As this treatment isn’t currently approved by NICE in the UK, we will have to fund the treatment ourselves, and travel to Germany regularly.”

We hope to have tumour sequencing analysis carried out at the CeGaT clinic in Tübingen, with a personalised treatment created which will hopefully give James a better chance in any rematch with Kenneth III. A second line of treatment, provided by IOZK, again in Germany, is dendritic cell vaccine which trains the body’s immune system to recognise and target the cancer. Early indications show these treatments to hold fantastic promise for extending survival rates.

James and I, along with Loxley our lovable, teddy-bear rescue-cat, are crowdfunding to help pay for this expensive treatment in Germany, which will also involve travel and accommodation there every month. 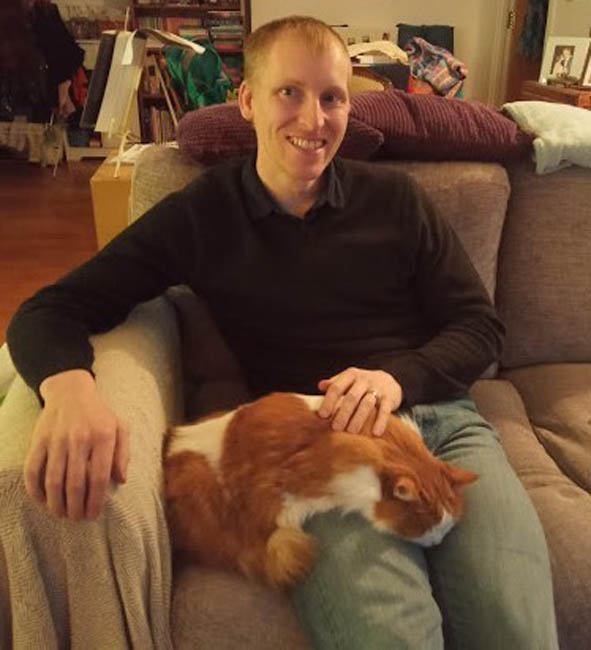 Meanwhile, since having surgery, radiotherapy and chemotherapy, James has been left with symptoms relating to his cognitive energy. He says he feels ‘foggy’ often and lacks acute focus. He is frequently tired and requires a ridiculous amount of sleep to be able to function properly. He is also now very absent-minded and attributes most of these down to lasting effects from the radiotherapy.

One thing that James’ excellent NHS team at Derriford Hospital made clear to us was that you don’t beat brain cancer. It is incurable.

“We have always been aware since diagnosis that brain cancer is a disease that can be managed and life-prolonged, but it cannot be cured – at least not with the science of today. However, immunotherapy may be the future of cancer treatment.”

If James cannot have the treatment or if there are funds leftover, we want the monies to go to Brain Tumour Research, especially as we both work at the University of Plymouth where the charity has a Centre of Excellence. The research side of things is so important to bring about more effective treatments and ultimately a cure, as was highlighted when Tessa Jowell was ill, grabbing everyone’s attention. But that seems to have dropped off again. We need a real breakthrough for brain tumours.

To help James get his immunotherapy treatment go to https://uk.gofundme.com/f/finding-chemo-help-james-beat-brain-cancer 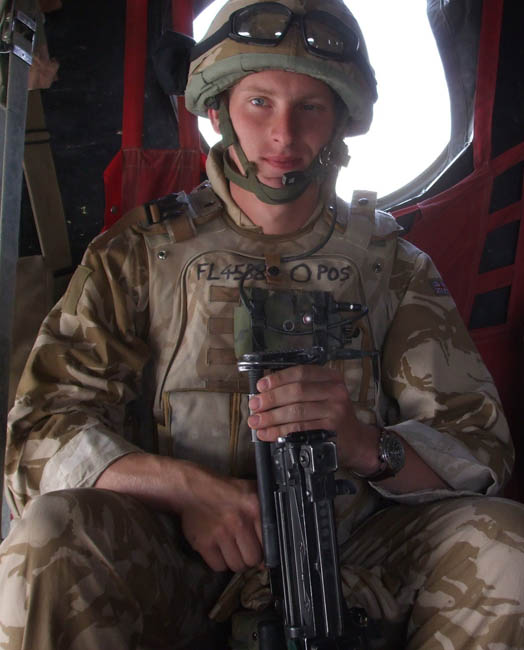