Jack was only a toddler when he was diagnosed with a brain tumour but, despite battling for his life for more than eight years, he lost the fight.  His parents feel consumed and suffocated by the emptiness they are left with, but they have to pick up the shattered pieces and rebuild their lives for the sake of their other two sons.

Jack was diagnosed with a malignant brain tumour in April 1996 when he was just 15 months old. Almost overnight our world came crashing down.  Jack’s life seemed to be slipping through our fingers like sand.  The surgery and chemotherapy – devastating for an adult – left our bright, articulate child battling for his life.  But Jack was a fighter, defying the odds on numerous occasions.

Time seemed to stand still, but slowly life improved and we began to strive to become a “normal” family again.  Jack, such a cheerful, gorgeous boy, inspired all who met him.  We would not be the family we once had been but we were determined to get on with life for our three boys.

But events conspired against us.  A recurrence in 1999 meant further surgery and radiotherapy.  It was devastating for Jack, but our only hope of a cure.  Jack was so incredibly brave and despite the terrible side effects he remained his cheerful, inspirational self.  Once more we plunged into the unknown, not being in control of Jack’s future.  Once more we picked up the shattered pieces of our lives.

Then, in 2003, a routine scan showed another recurrence.  Darkness enveloped us as we realised we’d lost our hope of a cure.  Surgery followed and bought us precious time with Jack.  Then another recurrence in 2004 further shattered our lives.  Yet more surgery – but Jack coped so well, we were convinced he could go on battling forever.  But in January 2005 the sand in our fingers had almost disappeared.  This time surgery did not work.  We were forced to face our worst nightmare; forced to watch Jack deteriorate before our eyes and before his brother’s eyes. No more wrestling, no more colouring, barely clinging to life.

We were not ready to say goodbye.  We thought he would go on forever.  This was all a mistake – when would someone realise that this should not be happening to us?    The pain is unbearable.  It has to be a mistake.

The void left in our lives is tremendous.  We will never be able to fill the emptiness we are left with.  It is all consuming, suffocating.  We don’t want time to heal our broken hearts, we don’t want to pick up those shattered pieces and try to rebuild our lives.  But we will.  For our boys we will learn to live another day.  Our numbness and disbelief will begin to fade but I know we will never be complete again. 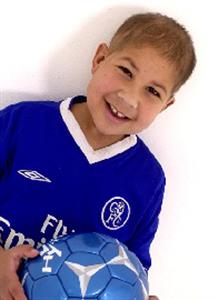