Hugh was 46 when he passed away on the 25th September 2013, just four months after diagnosis.  We had been together for 20 years and married for 14 of them.  Between us we had twins – George and Jasmine who were just eight years old at the time, while Hugh also had two grown up children – Joshua and Naomi from a previous relationship.  We were all very close and remain so.

“During the four months Hugh survived following his diagnosis, he was a pillar of strength.  He knew he was dying, yet he spent lots of time with me talking and passing on his strength.  He told me his goals and what he wanted me to do with the children and for myself.  He asked that he be cremated and buried under the apple tree in the garden and that a friend of his should make a bench so that we could sit there and be with him.”

Hugh worked for the Welsh construction company Jehu as a Working Foreman for 10 years.  He was a healthy, fit man with a passion for cycling and surfing.

Incredibly there was no indication he was unwell until the week he was diagnosed when he felt a bit wobbly on his feet (but had no headaches).  Looking back, I had, however, started to notice little changes in his personality. Then one day, when he and Joshua were on their way to work (both were employed by Jehu), Joshua was shocked to realise that his Dad was driving on the wrong side of the road.  Later he also fell off a ladder.

It was thought he could be suffering from carbon-monoxide poisoning, so he was given a blood test.   When Hugh was given the results, he was told there were signs of cancer.  An hour later, he went for a brain scan.  He phoned me at work to tell me the devastating news that he had a brain stem tumour.

As if this wasn’t enough to bear, three weeks later, even though surgeons were unable to take a biopsy, we were told that it was terminal.

It was such a shock to learn that nothing could be done. Hugh was just given a death sentence.

He did have six weeks of radiotherapy, going to hospital for treatment five days a week.  We knew it wouldn’t cure him, but it helped preserve his ability to swallow and continue to be able to eat, thus giving him a bit of quality of life (he passed away three weeks after his last radiotherapy treatment).  An amazing friend, Colin Boxall, helped us take Hugh backwards and forwards and I am so grateful to him as getting Hugh in and out of the car was hard.  It was a huge commitment on Colin’s part and we couldn’t have managed without him.

The people at Jehu also gave us incredible support during Hugh’s final months. His bosses came over regularly to visit and as soon as they realised Hugh needed a wet-room downstairs they arranged to send some lads to do the groundwork and then a family friend and plumber, Bleddyn Harris, donated his time to complete the room.

Jehu had already arranged for work to be completed on new guttering on the house that Hugh had just started when he became ill.  I am also so grateful that the company also gave Joshua compassionate leave so that he could spend precious time with his Dad in the last weeks before he passed away.

The tumour grew very quickly.  Within just three weeks Hugh was in a wheelchair being cared for by Naomi and myself.  We both took a few months’ leave from work with fantastic understanding from our employers.  Naomi and Joshua’s Mum, Jude Trotman, helped out in the evenings and weekends, giving me time to spend with the twins.

We continued to care for Hugh at home with the help of some amazing Marie Curie nurses right up until the day we lost him.

It was so cruel.  Hugh had always been such a fit man – always out on his bike or doing practical things for his family.  He was now no longer able to do anything for himself, yet he still had his memory and all his mental faculties.  It must have been such torture for him, yet he never complained.

It was obviously hard for the little ones to see their beloved Dad confined to bed relying completely on others, but when he did pass away I think it helped them to realise that, because he was so poorly, it was the best thing.

During the four months Hugh survived following his diagnosis, he was a pillar of strength.  He knew he was dying, yet he spent lots of time with me talking and passing on his strength.  He told me his goals and what he wanted me to do with the children and for myself.  He asked that he be cremated and buried under the apple tree in the garden and that a friend of his should make a bench so that we could sit there and be with him.

I will never move from our house – not just because Hugh is buried in the garden, but also because when we bought the house, Hugh gutted it completely and built it up again, making it a wonderful home for our family.  I have so many wonderful memories – I could never leave.

The day after the first anniversary of losing Hugh, Jehu, who had chosen Brain Tumour Research as their charity of the year, held a triathlon to raise funds.  It was a very emotional day for me and everybody involved in the fundraising event for such a fantastic charity.  Hugh would be very proud.

Seventy or 80 people signed up to take part in the triathlon which incorporated a 750m swim, then a 21k cycle ride, followed by a 5k run. Many individuals completed the whole triathlon themselves, while others got into teams of three with each member of the team completing one of the elements.  Uniquely, I was in a team of four – Hugh’s daughter Naomi and I took on the cycle component on a tandem.  Naomi also organised a raffle and cake sale which alone raised £375 on the day.

The more we can do to raise awareness of this devastating disease the better.  We have to find a cure, so that other families no longer have to go through the nightmare we have, learning that nothing can be done for their loved one.  This is only going to happen if brain tumour research gets the funding it deserves.  It is outrageous that just 1% of national cancer research spending goes on research into brain tumours, yet it is the biggest cancer killer of the under 40s. 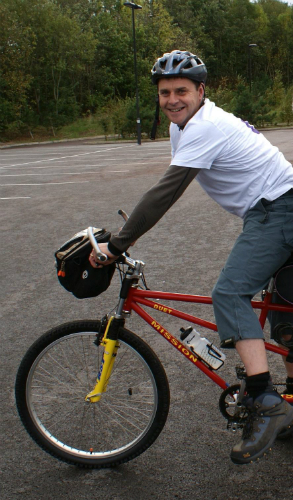