Garden designer Guy Farthing had just turned 60 when he was diagnosed with a low-grade brain tumour after suffering stroke-like symptoms. With surgery not an option, Guy underwent radiotherapy and chemotherapy. Sadly, over time the tumour became more aggressive and after nearly 10 years of battling the disease, Guy died in October 2017, leaving wife Jenny, children Kathy and Mark, and granddaughter Immie.


“It wasn’t until a few months later that we received a letter through from Southampton hospital asking him to attend for a pre-assessment. On arrival, we were given a letter which knocked us for six, as it stated that, two days later, Guy would be admitted for a biopsy on his brain tumour. We arranged to speak to the surgeon for clarification as we felt they must have got it wrong or maybe the letter was supposed to be for someone else.”

Here's Guy’s story as told by his wife Jenny …

Guy always had a passion for gardening and enjoyed the slow pace of games like croquet and watching the cricket on TV. He was always very thoughtful, kind and made time for others.

When he qualified as a garden designer in 1976, he was so happy to be doing a career that he truly loved and, after nearly 10 years in the industry, Guy decided to set up his own garden design company. Working from home was wonderful and gave Guy the opportunity to flourish in his career, as well as being a perfect spot to raise our two children Mark and Kathy. In 2003, we moved to the picturesque countryside of north Dorset and Guy set up a plant nursery to grow mature hedge plants which, at the time, could only be sourced abroad.

It’s been 10 years since our family life was changed forever. Looking back, we had no idea what was coming and how our family would be impacted the way it was.

It was early February 2008 when I received a call from our neighbour who had called an ambulance after finding Guy collapsed in the nursery. The doctors at the hospital thought Guy might have had a stroke and conducted a few tests and said they would run a CT scan to be sure. They prescribed blood thinning medication and we were sent packing, thinking that it was just a one off and that Guy would be back to his old self.

It wasn’t until a few months later that we received a letter through from Southampton Hospital asking him to attend for a pre-assessment. On arrival, we were given a letter which knocked us for six, as it stated that Guy would need to go to hospital two days later for a biopsy on his brain tumour. We arranged to speak to the surgeon for clarification as we felt they must have got it wrong or maybe the letter was supposed to be for someone else.

The surgeon explained that Guy did have a brain tumour and although it looked to be low-grade, it was spread out so thinly across the outside of his brain he wouldn’t be able to have surgery to remove it. Guy was advised to undergo a course of radiotherapy, as this would be the best treatment to halt the growth.

Guy was very accepting of the news and calmly asked questions as he held my hand. Having been married for nearly 40 years, I knew he would try to remain practical and realistic if either of us became ill.

In November 2008 Guy’s six weeks of radiotherapy treatment began. Travelling to Poole and back to our home in Hazelbury Bryan in Dorset was tiring, and Guy found it frustrating that he couldn’t drive. Out of the whole diagnosis experience, losing his driving licence was very frustrating to Guy and had a dramatic impact as it took away much of his independence.

We did tell the children about the tumour, keeping the news within the family until Christmas. It was only in the Christmas card family round-up when we mentioned that Guy was undergoing treatment for a brain tumour, but that he was doing well. Neither of us wanted to worry people, but we did feel it was good to be open about what was happening.

Over the coming years Guy tried to remain positive and make more time for friends and family. Our son Mark had a little baby girl called Immie in 2009 and she really was the apple of her grandad’s eye.

In 2012 a routine scan revealed that the tumour had grown again and this time they felt chemotherapy would be the best course of action, however when Guy reacted badly to the treatment it was put on hold until 2016 when it could be tried again.

The following year Guy chose to wind down the plant nursery. He sold the plants that he had nurtured but did not replenish the stock. I think he felt, after winning a number of awards at Chelsea Flower Show, Hampton Court and Tatton Park for his designs and even writing two books - Popular Garden Designs and Practical Garden Designs - with his father, Donald, he had achieved everything he wanted and it was a good time retire. We moved to Winchester in 2014 where all the essential facilities would be accessible to us as his mobility and health deteriorated.

Over time, Guy battled chest infections and was reduced to walking with a stick but he retained his smile and was determined to enjoy life and be outside in the garden.

Being able to walk our daughter Kathy down the aisle on her wedding day in 2014 was one of the happiest moments in Guy’s life and he was adamant that he would be well enough to do so even if his poor balance meant he could not take part in the Scottish dancing. It was lovely to see him beaming with pride. As a parent all you want is for your children to be happy and to see both Mark and Kathy both married meant everything to both of us. It truly was a wonderful day.

Sadly, the happiness didn’t last as a routine MRI scan at the beginning of 2015 showed the tumour had grown and the surgeon believed the tumour was now grade four, a much more aggressive type.Though they were able to remove some of the tumour, Guy had to go through another round of chemotherapy. We were all devastated by the news but tried to support Guy in whatever way we could.

By May 2015 I stopped working so that we could be at home together. After commuting for over 30 years into London it was nice to be at home and enjoy much more time together. By the beginning of 2016, Guy’s health began to deteriorate further and we all noticed that he was finding daily tasks harder. He was adamant that he wanted to be at home and, over the coming months, we fitted out the house with everything he needed in order to make daily life easier for both of us. It was heart-breaking to watch him struggle to read a book or understand the sports results as they came in. Even putting on the kettle became too much of a challenge.

My greatest fear was always that Guy’s personality would change, but for him becoming bed-bound was the scariest thought and sadly was something that did eventually happen in September 2017. And after 10 days floating in and out of consciousness Guy died peacefully on 3rd October 2017. During his last three weeks he had been wonderfully looked after in the local hospice.

Since Guy passed away, we have really come together as a family and I feel very thankful to have two such wonderful children who, with their families, have been my rock through all of this. Losing a partner after nearly 50 years together was never going to be easy and I have tried very hard to make sure that I make the most of the life I have, as I’m sure Guy would want me to be happy and have fun.

I have always been a ‘just do it’ person and felt, after the last 10 years, I needed to step out of my comfort zone and do something fun. So, in May 2018 I will be abseiling down the iconic Spinnaker Tower in Portsmouth to fundraise for the charity Brain Tumour Research, which funds research into this horrible disease. I ran the London Marathon when I was 60 years old, so an abseil is a great milestone for my 70th birthday year. I’m sure Guy would think I was crazy for taking it on, but also pleased that I’m making new memories, even if it is without him by my side.

In July 2019 Jenny took on another incredible challenge for Brain Tumour Research in memory of Guy, when she completed a sponsored skydive with the Red Devils! 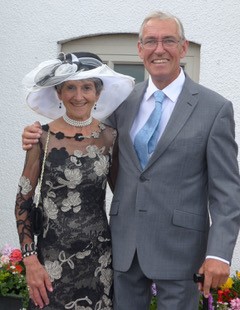