My brother, Frank, was 58 years old when we lost him to a brain tumour – two years and 10 months after he was diagnosed with a grade 4 glioblastoma multiforme.

“It seems so cruel that Frank died before his time, after all he went through during his life, losing his partner and unborn child, bringing up their two children alone, supporting Frank junior following his diagnosis with a tumour and then his very own personal battle.”

Here is Frank’s story as told by Jill…

Frank was a larger than life character with a terrific sense of humour.  He was very family-oriented, loved going away on holidays and enjoyed good food.  Having lost his partner Kerry aged just 35, and unborn son, Frank brought up their two children as a single parent – young Frank was just 13 and Sophie was nine when their mum died.

Frank junior had been diagnosed with a tumour on his optical nerve when he was seven.  He had radiotherapy to reduce and manage this and now lives with partial vision in one eye and is blind in the other. His mobility was also affected, but he worked hard at his physiotherapy, supported by his dad.

The first sign that anything was wrong with Frank senior was when he fell in the snow in December 2012.  He paid several visits to his GP following the fall, having noticed that he was slurring and having balance issues, but was told that this was most likely down to concussion.  Things got more worrying when Frank’s               co-ordination began to be affected.  He feared that he had had a stroke, but the GP reaffirmed it was down to concussion.

Then, in March 2013, Frank fell out of bed.  His children, now aged 34 and 29, called an ambulance and he was taken to the Princess Royal Hospital in Haywards Heath.  He underwent his first procedure on Good Friday and it was then that we discovered he had an aggressive brain tumour - a grade 4 glioblastoma multiforme.  This came as a total shock to all the family. The surgeon told us he had removed as much of the tumour as he could and hoped that this would keep it at bay.

Frank underwent radio and chemotherapy at Maidstone General, which he tolerated reasonably well without complaining, although he missed being able to go away on holiday with his family.  He was very brave.

Almost a year later, however, the tumour came back and Frank had further surgery to debulk the tumour.  Nine months later, in December 2014, the tumour returned again and we were told that there was nothing more that could be done.

In January 2015, Frank eagerly took part in a clinical trial being conducted by the Royal Marsden, which entailed him trialling a drink which was administered three times a day, at 8am, 4pm and 11pm.  Initially the signs were good – scans showed the tumour had either remained the same, or even shrunk.  During this time Frank was able to go on holiday to Turkey with his daughter and two grandchildren, although not without some difficulty.   The radiotherapy had meant he had lost a lot of his memory, particularly short-term.  However, he had really missed not being able to travel when he was undergoing treatment and this was a well-earned break for him and his family.

In August 2015, however, the news we were dreading came that the tumour was growing again and Frank was discharged from the trial, although hopefully his input will go towards helping the fight against brain tumours.

We looked after Frank at home, as we knew that was how he would have wanted it. We had a good care package, lots of support via hospice at home, Macmillan nurses and also respite for over-night.

He died peacefully at home surrounded by his loved ones on 31st January 2016.

It seems so cruel that Frank died before his time, after all he went through during his life, losing his partner and unborn child, bringing up their two children alone, supporting Frank junior following his diagnosis with a tumour and then his very own personal battle.

I was shocked to discover that brain tumours are such a big cancer killer, particularly of children and young adults and am proud my son, inspired by his funny, brave uncle decided to take on the challenge of a skydive to raise badly needed funds for research. 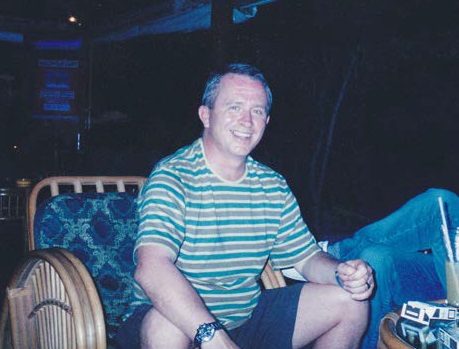