We are grateful to David who worked with us in October 2013 to share his story here. Sadly, he passed away. We remember David as we continue our work to raise awareness of this devastating disease and to fund research to help find a cure. He will be forever in our hearts.

David Grant was diagnosed with a glioblastoma multiforme grade IV brain tumour in August 2005. He was working as a Senior Project Manager for the Royal Bank of Scotland and married with a two-year-old daughter at the time. David was told he could have just 12 months to live. Fast forward to today: David hasn’t received cancer medication since 2006 and is now watching his daughter growing up.
I was in Belfast on 10th August 2005 and was about to chair a meeting when a headache came on. I made a quick trip to Boots and spent 16p on a packet of paracetamol and everything was back to normal. Back home in South London, I woke on Sunday morning vomiting, after a string of headaches that week. The next day I wasn’t well enough to go to work so, rather than sit it out, something told me to go to my local medical practice. After explaining my symptoms to a nurse, I was told to try a dairy-free diet for 24 hours and if that didn’t help, then to come back and see the doctor.

My wife soon took me back to the GP after I began twitching badly and becoming increasingly incoherent. I was swiftly admitted to St Mary’s Hospital in Sidcup, where they did a CT scan and discussed a number of possibilities, including a tumour. My scan was then sent to King’s in London and they confirm it was a tumour, so I am then admitted there to have it removed.

Having spent my career as a Project Manager searching for solutions, I was lifted by this news that a solution had been found for the problem. I was transferred to King’s and three days later I was scheduled for the operation. Everyone was positive and motivating. My wife and I were warned of the risk of a brain haemorrhage, so she was more than relieved to hear my voice seven hours later.

However, after the operation, I couldn’t help but notice the change in mood in the clinicians. Gone were the motivating and reassuring smiles – what they had found was malignant, which meant a 12 to15 month survival. I was told I would need to go on a six-week course of radiotherapy, but even that would only keep the tumour away for 12 months. I was encouraged by hearing about Temozolomide, a type of chemotherapy offering promising results.
However after a quick glance at my file, the oncology nurse declared, “But you wouldn’t get that with your postcode”. Undeterred by this, I made a quick call to the RBS healthcare provider and we were back in business.

The news was obviously disappointing, but what surprised me most of all was the lack of encouragement to fight this. I had a lot to fight for, central to which was my lovely daughter. On the way home from the hospital, my wife and I discussed my survival plan. I made two pledges that day: to walk my daughter to her first day at school and to survive well into 2014, so that I might care for my daughter for at least a year longer than my grandfather did for his. I will always remember a cynical grin from one of the nurses – not so fanciful now.

I started the radiotherapy and chemotherapy programme, but was told not to complete the sixth week of Temozolomide. Tests had shown my platelet count was dangerously low. I was devastated by the news as I was still in the ‘12 month zone’. Three months later however, I was back on the cycle, only this time on almost double the dosage, for one week a month for six months.

On 23rd July 2006, I received my last dose of cancer medication and a month later, my end of treatment scan. I speculated on the results – had the treatment worked? Would I still be around to honour the pledges I made almost a year ago? I was taken aback by the reaction of the Oncology Team at St Thomas’ and remember the words ‘fab’, ‘excellent’ and ‘couldn’t be better’. The sheer enthusiasm was striking, as statistics show that the prognosis for the vast majority of people diagnosed with a malignant glioblastoma multiforme is 12 to 18 months, with current available treatment usually just helping to give a few extra precious weeks of life. I was told there was a likelihood the tumour would return, but hopefully we were looking at a year without symptoms.

On 13th September 2006, after 277 days off sick, I returned to work at RBS on a gradual return to work programme. I soon turned 50 and was eligible for early retirement and was offered a redundancy package; that, paired with the thoughts of ‘is this my last Christmas? Birthday? Summer?’ etc, made it too good an opportunity to miss. That summer, my wife, daughter and I took a long summer holiday. I returned to an email from an ex-colleague inviting me to help on a project and I found myself back working at RBS that September, in a role I remained in until July 2013.

Since getting the good news over seven years ago, I’ve had regular six-monthly MRI scans. After my most recent one, my consultant claimed I was part of a small group that was ‘simply thriving’ – my most encouraging words yet.

I’ve used my experience of living with a brain tumour to spread awareness of the condition. I’m currently working with Macmillan to publicise a toolkit about working with cancer and employer responsibilities. I also lecture MSc students studying Rehabilitation Services and talk about my experiences. I am passionate about raising awareness into the desperate need for research into brain tumours and have even spent time lobbying on behalf of Brain Tumour Research in the House of Commons.

My survival so far should give hope to others. With the medical advances that have been made since 2005 and the progress in clinical trials, the statistics are showing glimmers of hope. My motivation throughout it all came from my lovely daughter, who is now 10 years old. As I promised back in 2005, I got to walk her to her first day at school, a moment I will treasure forever. I’m looking forward to the rest of the milestones I get to see her through.

Nevertheless, every time I have another MRI scan, my family and I, like so many thousands of other brain tumour patients across the UK, have to go through the trauma of waiting for the results and wondering is it going to be good news or bad this time? Had I kept still enough? But you can never tell. These are sophisticated machines designed to detect things before they’re apparent to you. 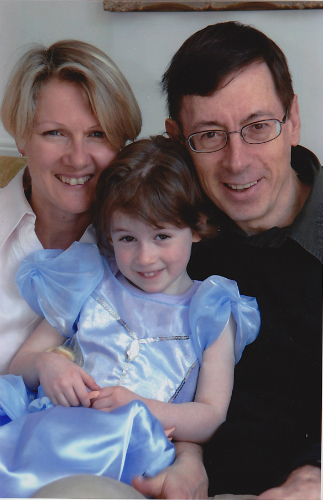