The Danny Green Fund was set up when his parents lost their gorgeous son Danny at the age of 11. Before he was diagnosed with a brain tumour, their beautiful, fun loving and energetic son was a typical 10-year-old in every way, very much living for the moment and enjoying life. Tragically, Danny died just nine months after diagnosis, leaving a void which will never be filled.

“Our hearts are broken and can never be repaired. To lose a child is unbearable and should not happen. Danny is the inspiration for our charity: to raise funds to help children with Posterior Fossa Syndrome, which was Danny’s main battle on a daily basis, to fund research to help find a cure, as well as to raise awareness of this devastating disease to hopefully prevent other children from suffering as Danny did...”

Here is Danny’s story, as told by his mum, Lisa…

Our world was rocked forever when Danny our fit, sporty 10-year-old boy came home from school on Thursday 3rd November and said that he felt dizzy while playing football but was otherwise ok. The next day he went to school as usual but later that night he had a headache and on Saturday morning Danny started being sick. Over the weekend he continued being very sick and the headaches had got worse so we took him to A&E at our local hospital. Danny’s headaches increased in pain until it was so unbearable that he was sick.

By Thursday morning, a week since he had started to show symptoms Danny collapsed in the hospital toilet and subsequent observations showed a cause for concern. He was taken for a CT scan and then for an MRI which confirmed our worst nightmare that our beautiful little boy had a brain tumour.

At that moment our world caved in and has never been the same since. We were immediately transferred to Great Ormond Street hospital where an emergency operation to relieve the pressure on his brain was performed. The next day Danny had an operation to remove as much of the tumour as possible.

Unfortunately, as a result of this, Danny was left with Posterior Fossa Syndrome which left him mute, unable to swallow, with weakness in his left side, unable to hold his head up or walk. Not only did our little boy have a brain tumour but he had the effects of this awful syndrome to overcome too (luckily with intense physiotherapy Danny eventually overcame most of these problems and just needed support with balance and was able to walk with the aid of a walking frame).

A week later we were told that Danny had medulloblastoma and that the tumour they had removed had grown back as it was so aggressive. Unfortunately, it had also spread to his spine. Danny was to be treated with the Milan Protocol as this was his best chance of survival. Emergency chemo was given to try to stop the rapid re growth of the tumour which unfortunately irritated the tumour leaving Danny fighting for his life in Intensive Care. Amazingly Danny got through this despite twice having to call the family up as he was not expected to make it through the night.

He went on to receive the next three lots of chemotherapy in his protocol and then radiotherapy before starting two lots of high dose chemo in April 2012.

Over this time Danny was amazingly strong and brave he never once moaned or cried about his treatment which left him with severe mucusitis and sickness. Danny was very poorly with his chemo but every time he bounced back and the MRI scans during this time showed that the tumour was shrinking. He amazed staff with his fight and determination and was always singing, his progress was amazing.

Unfortunately, during the last round of high dose chemo Danny got pneumonia and a virus and ended up back in Intensive Care struggling to breathe. He was put on a ventilator and after nearly two weeks sadly lost his fight for life on 25th July 2012 at just 11 years old.

Our hearts are broken and can never be repaired. To lose a child is unbearable and should not happen. Danny is the inspiration for our charity: to raise funds to help children with Posterior Fossa Syndrome, which was Danny’s main battle on a daily basis, to fund research to help find a cure, as well as to raise awareness of this devastating disease to hopefully prevent other children from suffering as Danny did...

If you have been inspired by Danny’s story, you may like to make a donation via http://www.thedannygreenfund.org.uk/donate.html or leave a gift in your will via www.braintumourresearch.org/legacy 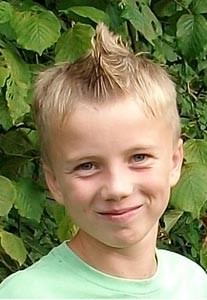