Husband, father, and grandfather, Christopher Todd was 63 when he was diagnosed with an aggressive grade 4 glioblastoma multiforme brain tumour after suffering violent headaches and stroke-like symptoms. As he underwent surgery, radiotherapy and chemotherapy his daughter Vicky set about raising funding for research to help get him better. With the support of his family, Christopher fought his illness but passed away in hospital in November 2016 at the age of 65.

“When dad was diagnosed I just couldn’t understand how this could happen. How can so many people have brain tumours yet so little be known? I was flabbergasted to learn that brain tumours kill more children and adults under the age of 40 than any other cancer yet receive so little funding. How can it be right that just 1% of the national spend on cancer research is allocated to this devastating disease? I cannot sit by and let this happen so I set about fundraising for Brain Tumour Research to help my dad get better.”
Christopher’s daughter Vicky tells his story …

My family has always loved Christmas and, for the last two years, we were determined it would be the best ever as we had no idea if it would be the last with our beloved dad. It was so precious for us to gather together as a family, his two children and six grandchildren all around him.

Dad loved the snow and would be the first to grab me and my brother Karl, who is younger than me by three years, and run out to have a snowball fight. We had a great childhood growing up in the 1970s and 1980s in Whitehaven. Every morning I would leave our house and look out at the sea. We all loved the beach too and had some very happy times.

Dad worked as a miner and a labourer but took retirement through ill health some 12 years ago. He had two cardiac arrests and wasn’t able to get back to his job and, when he was taken ill on Mother’s Day 2014, we thought it could be his heart again. He was sweating a lot, looked very white and said he felt sickly. The doctor referred him to a cardiac consultant but still they could find nothing wrong. Dad began to complain of violent headaches, something which was completely out of character because he didn’t normally complain about any ailments. It was obvious he wasn’t well and, along with my mum and brother, I was very anxious.

We were backwards and forwards to appointments with no real progress or answers when, on Monday 2nd June, I went to visit my parents – we all live in the same town – and my dad looked as though he had had a stroke. His eyes were glazed, the left-hand side of his mouth was drooping and he had lost the use of that side of his body. The doctor asked us to get him down to the surgery straight away. I will never forget the sight of my dear dad struggling to tie his shoelaces. His co-ordination was awful and it was heart-breaking.

We were referred to West Cumberland Hospital the following day and, within two hours of arriving, we were told that dad had a brain tumour. We are a very close family so had all gone together, my dad and mum, me and my brother. In that moment I felt that my whole world had shattered. I felt disbelief and just couldn’t absorb what I was being told. At that stage of course we had no idea if the tumour was cancerous, if it was elsewhere in his body or what was likely to happen.

Subsequent CT and MRI scans and further tests revealed it was a primary brain tumour, which was positive as at least it wasn’t elsewhere in his body, and it was operable.

Dad’s care was transferred to our nearest neurological unit in Newcastle. He underwent pre-op checks and was in surgery within days. The operation lasted for ten hours. My mum, Karl and I wandered aimlessly around town as we waited for news. Finally we had a call to say the surgery had gone well and 80% of the tumour had been removed.

Just three days after his surgery and, with a hat to cover the 50 or so staples holding his skull together, dad was home and went into town with my mum. He was very positive and just wanted to get out.

Quite soon after that we went back to the hospital to be told that dad’s tumour was a grade 4 glioblastoma multiforme (GBM). I had gone armed with a notepad and pen and we asked lots of questions. The prognosis was as little as nine months but could be longer depending on treatment and how my dad responded.

In some ways dad was fortunate because the location of his tumour not only meant it was operable but that he could have radiotherapy and chemotherapy. His doctor called it the “five star gold standard” and dad managed to remain upbeat most of the time. It is dreadful to see someone go through treatment like that, we were so worried, and in some ways it didn’t seem like my dad. For the first couple of weeks after his surgery he was aggressive and more snappy than usual but, fortunately, things settled down.

I had grown up with a dad who was bubbly and the life and soul of the party. He loved the Rolling Stones and would often be dancing and doing his Mick Jagger impersonation. Thinking about what he had been through, how he had changed and what might lie ahead, was devastating.

Afraid that 2015 might be our last Christmas together, we were determined to make it the best ever. We had a great time and were hoping we would be able to do the same this year.

Dad’s chemo finished in April and we had a nerve racking wait for a rescan and the results which we finally got in June. Dad had been responding so well so we were deflated to be told that it looked as if one part of the tumour had shrunk but another part had grown. However, an MRI scan later revealed that change was down to the radiotherapy rather than tumour growth and we were absolutely elated. We celebrated with a bottle of Champagne which I had been holding onto for a special occasion and this was definitely it!

His condition was stable for a while but, sadly, this summer we discovered his tumour was growing. This desperate situation was made worse by the fact that we had to struggle and fight all the way to get him seen and to try to put a treatment plan together. It was as if there was no urgency, we had to make repeated phone calls and requests to get anything done.

We did manage to get him some more chemotherapy but his condition was quickly deteriorating. He was taken into hospital and, sadly, we watched him become more confused. He still entertained us though but as the days past he slept more and more. My heart was breaking all over again. Dad passed away on 6th November and I still can’t get my head round the fact that he is gone. I will miss him every single day for the rest of my life.

My dad was 65 with limited mobility so perhaps doctors thought it wasn’t worth doing anything. Of course they didn’t see my dad the way we do, a loving husband and much-loved grandad, a man who deserved a long and happy retirement and to be in his beloved garden growing vegetables.

One thing I am certain of is that not nearly enough is known about brain tumours and there are not enough effective treatments. I never accepted that my dad is a “lost cause.” When dad was diagnosed I just couldn’t understand how this could happen. How can so many people have brain tumours yet so little be known? I was flabbergasted to learn that brain tumours kill more children and adults under the age of 40 than any other cancer yet receive so little funding. How can it be right that just 1% of the national spend on cancer research is allocated to this devastating disease?

I cannot sit by and watch this happen so I set about raising funds for the charity Brain Tumour Research. I’ve done a marathon, half marathons, a cake sale for Wear A Hat Day, a charity auction and even a sponsored sky dive in Las Vegas, although I am terrified of flying. I set out to raise £10,000 in a year but I have already smashed that and have now set my sights on raising £20,000.

Dad told me all the time how proud he was of me. I am determined to put all my energy into doing what I can to raise money for research. At the outset I was doing it to make my dad well again, now I’m doing it in his memory and to help others. 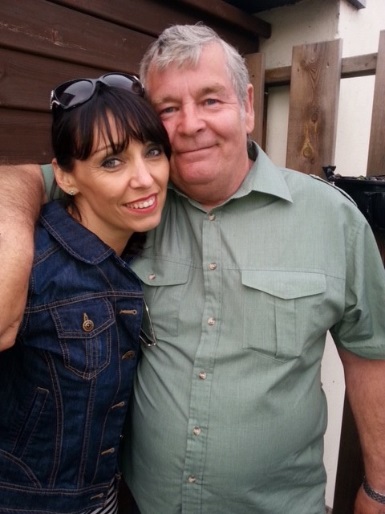