Charlie was six years old when he was finally diagnosed with a GBM4 brain tumour after months of “migraines” accompanied sometimes with projectile vomiting and instances of eye pain.  His parents were told that his chance of survival was 25%, although they later found out that it was a lot less.

“The day of the scan was the day our lives changed forever and was the worst day of our lives so far…   I remember the feeling of utter despair.  I can’t even explain the feeling – it was the most horrendous pain.”

Charlie was our first born child.  He was funny, clever and great company.

At the age of five, he began trampolining classes and was soon gaining badges.  He enjoyed dressing up as his favourite super heroes, especially Spiderman.  His favourite singer was Michael Jackson and he used to practice his dance moves over and over again.  Mika and the Black Eyed Peas were a couple of his other favourites.

Charlie was a huge Adam Sandler fan and had a special love of rhinos which were his favourite animals.  He loved the colour green, was popular at school and loved his family and his friends very much.

In 2007, Charlie became a big brother when his sister was born and again in 2010 when a little brother arrived.  Charlie used to call his baby brother “his wish” as he had wished for a brother.  But it was around the time when our third child was born that Charlie’s good health took a terrible turn.

I remember a random episode in the summer of 2009 when Charlie came down from his bed, crying with a pain in his head.  This pain suddenly cleared after some projectile vomiting.  We called an ambulance as we were so worried and even the paramedic attending to Charlie was concerned that even though he was fine after being sick he should still be checked over in hospital.

We were sent home from hospital with a food-poisoning diagnosis.  We were not happy with this because of the pain in his head, but we were assured that food poisoning could cause this.

Charlie was healthy for the following months until December 2009 when he started to get the odd headache and complained of feeling strange.  He had a cold and a bug and the GP prescribed antibiotics.

On 16th January, nearly two weeks after his baby brother was born, Charlie started to vomit and wasn’t interested in our visitors that day.  It was unlike him.  Over the next few days, he developed episodes of severe eye pain and again would vomit and be totally fine, back jumping off the sofas like any normal six-year-old.

Becoming increasingly worried, we took him to the optician’s to rule out any eye problems, before taking him to the GP where he underwent blood tests.  No problems were evident.

Between January and March, we went back and forth to the GP and to A&E, but came no closer to a diagnosis.  Charlie even had an over-night stay in hospital as he started to vomit on a daily basis.  This time gastroenteritis was diagnosed and Charlie was sent home with anti-sickness medication.

I asked whether Charlie should have a brain scan, but the doctors thought he may be suffering with migraines.  When we finally saw a paediatrician, I explained that I was worried that Charlie’s problems had something to do with his brain.   She agreed to refer him for a scan if only to reassure me it was migraine and prescribed migraine tablets.  Something told me not to give them to Charlie, so I didn’t.

The day of the scan was the day our lives changed forever and was the worst day of our lives so far.  We sensed that the team had found something, but they would not say what.  There was a long wait and we were led to a room with a few people inside.  We were told two things: firstly they had found a tumour and secondly it had grown to such a size it had now cause hydrocephalus.  This is a condition which blocks the flow of the brain fluid and causes vomiting.

Charlie’s Dad was angry with the medics for missing it so many times.  I remember the feeling of utter despair.  I can’t even explain the feeling – it was the most horrendous pain.  This couldn’t be happening to our Charlie, to us – it’s only something you read or hear about.  This must be just a bad dream.  Even though it had crossed my mind that Charlie might have a tumour, we never expected to hear these words.

Charlie was transferred to Great Ormond Street Children’s Hospital where he underwent surgery to insert a shunt to help drain the excess fluid causing hydrocephalus.  A biopsy of the tumour was taken too.  It was so hard seeing our son, just six years old, having a craniotomy.  I remember being very fearful that I wouldn’t be able to cope and wanting someone to somehow help me.

After surgery, Charlie was cared for on the high dependency unit and looked fragile and skinny.

A few days later, we received the results of the biopsy.  It was the worst possible news – Charlie had the most aggressive and malignant tumour a glioblastoma multiforme grade 4 (GBM4).

We were told that Charlie only had a 25% chance of survival (we later found out it was actually much less).  Because of the size of the tumour and the fact that it had started to spread, the doctors thought it would be better to start radiotherapy without delay, rather than putting Charlie through a major operation.

I was hysterical, everything was spiralling out of control.

Charlie was to start six weeks of radiotherapy the day after his seventh birthday, which would be followed by chemotherapy.

Each piece of news was worse and worse and felt like someone physically punching me in the stomach.

In desperation, we contacted different hospitals around the world for help and got second opinions, but it seemed no one could change the outcome. His father spoke to leading experts and asked about new treatments but we were told none could help him.

We spent hours and hours searching for a cure for our little boy with doors slamming in our faces everywhere we turned. It was exhausting and draining but we were desperately looking for a cure.

Charlie was on a huge dose of steroids and he gained a lot of weight.  The radiotherapy made him lose his hair.  He often needed a wheelchair as he was too tired to walk.  He stopped talking so much but as they reduced his steroids he got back to the old Charlie again.

Radiotherapy was so frightening – Charlie was strapped down and had a mask which had been specially moulded for him.  We were kept outside only able to watch him on a screen and talk to him through a walkie-talkie. It was so hard, but all we could do was console ourselves that this might be the one thing that saved our little man. He would listen to Mika and Black Eyed Peas whilst having the treatment to make it a little easier.

Charlie knew he had a lump in his head and the doctors were trying to shrink it.  He never complained, although he did ask: “Why me, Mum?” a couple of times.  We tried to explain that sometimes things happen and we all have to be strong.  I promised him he would get better as that’s what we believed.

We went to his school, Broadfields in Edgware, for the odd afternoon together or to share lunch with his friends, which he enjoyed.  Charlie was really conscious of his hair and the changes in his appearance, even though we told him it didn’t matter.  When he met someone new, he’d always say “this isn’t my proper look” and prompted me to show a photo of him before he got ill.

Charlie did well after radiotherapy and sometimes was even running about.  From the start of his radiotherapy treatment we decided to cut sugar out of his diet to give Charlie the best chance and this was hard as he was still a little boy.

Four weeks after the end of the treatment a scan revealed that the tumour had shrunk.  We were so happy.  Charlie said: “That’s because I ate all my broccoli.”

He began chemotherapy and fortunately didn’t really suffer any side effects.

We took Charlie on holiday to the South of France and went to Lourdes – a major Catholic pilgrimage site where many people have claimed to been miraculously cured.  Sadly, there was no miracle for us.  Towards the end of our holiday, Charlie started to get headaches so we stopped being as strict with the ‘no sugar’ rule as we were not sure it was helping anymore.

We also noticed a change in one of Charlie’s pupils, but after an MRI at our local hospital, we were ecstatic to hear that the tumour had shrunk further.  Devastatingly, we were then told this was a mistake and that not only was the tumour growing again, but there were also two more tumours starting to form.  We could not believe it.  How could they tell us it had shrunk and then the very next day that it was growing again?  Our world was crumbling away.

We were given a choice: either to carry on with the same type of chemotherapy and hope for a delayed response or hospitalise Charlie with a different chemo that he may not be able to cope with.

An oncology consultant at the hospital admitted that no progress had been made in treating this type of tumour in 40 years.

We decided to try again with the same chemotherapy.  We had a good few weeks and never gave up on Charlie or imagined our life without him.

During Charlie’s journey, we took him on some holidays with family and friends, including a trip to Disney Land Paris – a gift from the Christian Lewis charity.  It was the best thing we did with him – he loved it and we were grateful beyond words.

We adopted a rhino for Charlie at Woburn Safari Park and they went above and beyond for him.  Charlie even got to touch his rhino – we are so grateful to Dan and Georgina for making this happen.

We were trying to make Charlie’s dreams come true, even if we couldn’t fix it for ourselves.

Charlie had a long telephone conversation with Adam Sandler, who will never know how much he made a difference to a little boy’s life.  Adam will always have a place in our hearts.  Charlie always said laughter was the best medicine.

Thank you to everyone who was here for us through Charlie’s illness and who helped us in any way.  We have not forgotten.

Tragically, we came to the end of the road in treatment available for Charlie.  His health deteriorated and on 14th November the oncology nurses called with his blood results to say his kidneys were not working as they should…  His body was shutting down.  The next day was Charlie’s last day with us and our lives have never been the same.  It has been nearly six years since we lost him and it doesn’t get any easier.

Charlie has since had a new baby sister, who was due on his anniversary.  We have also set up Charlie Charges On to try to help find a cure for other parents who are told the dreaded news.  We will never forget you Charlie and will charge on, keeping your memory alive. 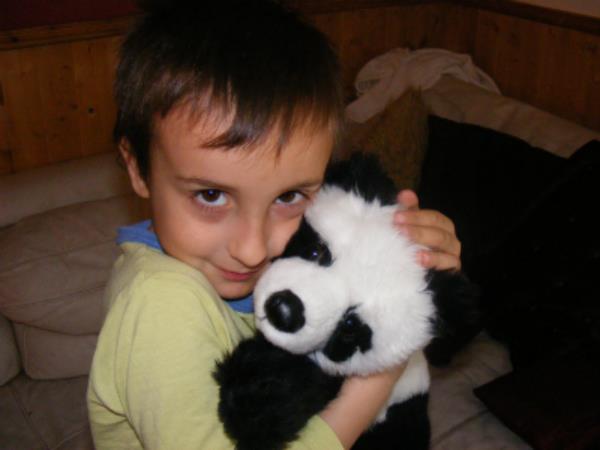