In 2008, Angus was working as a police officer at Scotland Yard.  He walked into a post at the railway station and afterwards had a severe headache which progressively got worse.  We suspected a haematoma and were referred for a scan at our local hospital.  In fact, the news was much worse – it revealed that Angus had a brain tumour.  Angus was only 41, a husband and father of two young children.

Since the initial diagnosis, we also had to come to terms with the fact that Angus had a very rare and very aggressive cerebral lymphoma brain tumour.  There are only about seven cases across the UK and 30-35 in the whole of Europe.  Almost nothing is known about cerebral lymphomas because they are so rare - so there has been no research into how to treat them.  Angus was offered drugs which had not been previously tested.

It was also discovered that Angus had cancer in his right elbow, which was possibly the primary cancer.

Angus underwent chemotherapy and radiotherapy and in 2010 he had a stem cell transplant which they hoped would give him an extra seven years.  It didn’t work and before Christmas, 2010, he started having fits and severe headaches.  We were told to prepare for the worst.

We were now under the care of the hospice and were left with taking each day as it came as we just didn’t know what the next day would bring.   Angus had always been a very active man, playing cricket, hockey, tennis, running, skiing etc and was always outside.  On good days he still liked to try his hand at bowling to his sons – particularly with Tim, who, like his father, loves cricket and hockey.  Angus also liked to do a bit of gardening or walking.

At Easter, we went away as a family to the coast and had a lovely time.

Angus continued to deteriorate rapidly.  During the second half of May 2011 he was admitted into our local hospice.  Several days later, he wanted to come home so we had lots of equipment delivered and organised carers.  It was nice to have him home (and for Angus to be aware he was in familiar surroundings), even though it was just for a short while.  Then Angus worsened and had to go back to the hospice.  On 3rd June I took the boys to visit him in the afternoon, while trying to keep life as normal as possible for our sons.  We left and Angus passed away just half an hour after we had gone.

We have managed to stay in our beautiful converted barn, which Angus designed.  His parents, Mary and Paul, who have been wonderful
to us, live next door.

On 28th February 2012, the three of us went to a ceremony where the Commissioner of the Met Police, Bernard Hogan-Howe, presented us with an award for ‘Angus’s commitment to professionalism, whilst overcoming adversity’.  Angus had worked with Bernard on a big case when he was the Chief Constable of the Merseyside Police Force.  Bernard had heard that Angus had passed away and had always thought highly of him.  He told us that the award will be presented annually from now on and will be known as the Angus Anthony Award.  We are delighted that Angus has been honoured in this way and his award is sitting on the mantelpiece in pride of place.

He was an amazing man, father and son - simply the best.

Before he passed away, along with close friends and family, Angus was very involved in setting up The Twelfth Man, a Brain Tumour Research fundraising group.  The choice of logo reflects Angus’s two favourite sports – cricket and hockey. 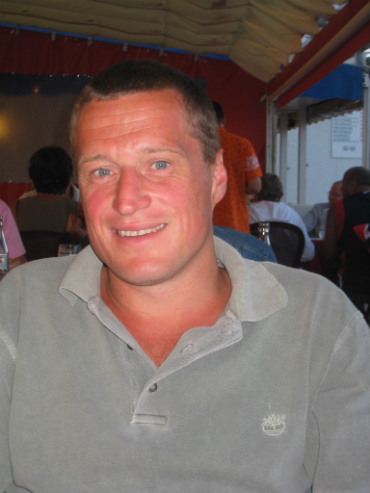