Andrea passed away just nine months after being diagnosed with a grade 4 glioblastoma multiforme (GBM) brain tumour. She was 46. The mother of a teenager and much-loved partner of Nick Butler, she underwent surgery, chemo- and radiotherapy but could not be saved. She and Nick had a short-lived romance as teenagers and then met again by chance 21 years later.

I first met Andrea when I was 19. We went out a couple of times but then I went away to work and we lost touch. More than two decades had gone by and we had both had our 40th birthdays by the time we met again by chance in July 2005. We bumped into each other in a pub. I had always hoped that somehow, somewhere, I would see her again but had no idea what she was doing or where she was. It turns out that, unknowingly, we lived very close to each other in Perton, Wolverhampton. She tottered over on her heels and we chatted, it ended up with her inviting me round for a cup of tea and she said: “Don’t cock it up this time!” It seems we both held a candle for each other after all that time. She had a young son, Ryan, from a previous relationship but neither of us had married. Things moved on and we each sold our houses in order to buy a property together to make a home for us and Ryan.

Andrea was always a bubbly person and the first sign something was wrong came at Christmas 2010. She said she felt strange and she was very tired which was most unusual for her. She was always on the go and worked as PA to Richard Westwood, the Director of Brewing at Banks’s Brewery where she had been since leaving school. Andrea managed to stay at work but was very lethargic. Christmas came and went and then on the day after Boxing Day, three of us drove to Norfolk to visit her mum. When we arrived Andrea was so violently sick she bruised her neck. She had been complaining of a terrible headache and although it was a four-and-a-half hour journey I thought it was best that we went home.

We went to the out of hours emergency service and she was given tablets for sinusitis. The headache did subside but a week later Andrea set out to drive to Telford to meet up with a friend and go to the cinema. It took her much longer than it should to get there and when she eventually arrived, her friend noticed something was badly wrong and phoned me. I drove over to meet them and could see that Andrea’s right eye was closing up and she was struggling to see. Her friend took me aside and said: “I think she might have a brain tumour.” Incredibly, a friend of hers had been diagnosed and she recognised similarities with Andrea’s symptoms.

We went to the optician who said she had a swollen optical nerve and we were referred to hospital straight away. She had a CT scan which revealed a tumour the size of a small satsuma in the front left of her brain. It was an aggressive, grade 4 glioblastoma multiforme (GBM) brain tumour. I had specific instructions to stay at home and get Ryan his dinner. She did not want me at the hospital and said: “It’s only a brain tumour.” Andrea was known for her forceful character, she always gave an honest opinion and people used to come to her to ask her things, knowing they would hear the truth. The brain tumour was already changing her personality; she didn’t want me with her but her friend did go to the hospital.

Andrea was transferred from New Cross Hospital in Wolverhampton to Queen Elizabeth in Birmingham. She was given steroids to reduce the swelling and the neurosurgeon said he hoped to remove 40% of the tumour. After that there would be drugs but the tumour would come back. We were told she was going to die and it was just a matter of when. You hear the words but they don’t really sink in.

After the operation in January 2011, Andrea had six weeks of chemotherapy. Friends rallied round and helped take her to and from hospital every day. I wanted to be with her but had to go back to work. After that, there was a month’s break from treatment. Andrea was bloated by the drugs and was concerned about that. She didn’t mind losing her hair so much. When it got straggly she asked me to shave it off with the dog clippers which I did! They gave her a real hair wig which she liked although she didn’t always get it on straight first time.

During the break from treatment Andrea started to lose her balance and felt her legs weren’t working properly. We asked for another scan, although she wasn’t due to have one until August, and the results showed the tumour had grown back and was affecting her blood supply.

It was the worst possible news. Nothing could be done. There were no drugs, no treatment and no hope.

It was in July that year that, out of the blue, I had a call from a friend, Andy Foote, who had lost his son Joseph to a brain tumour. He told me about a drug trial in Texas and suggested we get Andrea’s medical notes sent there immediately. I went straight back to the hospital and begged the woman at the desk to give me her notes. She was understandably reluctant but relented when she realised we were near-neighbours and she recognised me from dog walking.

We were desperate and thought this might be some good news. Unfortunately the response came back that we were too late; Andrea’s tumour was too advanced. Had we contacted them earlier there might have been some hope.

By this time Andrea was relying on me more and more to help her with things like getting to the bathroom and getting dressed. She was steadily deteriorating. It’s a bit like carrying water in a bucket: you lose something every day and over time that all adds up to a big loss. We had special equipment to help make Andrea as comfortable as possible at home. I promised I would look after her myself for as long as I could. The brewery kindly helped us from a charity fund and we had a chairlift installed so at least we could still get upstairs.

During August, Andrea had a seizure. She was taken to hospital by ambulance and I was asked the question that, if this happened again, would I want her to be resuscitated. That is a question you are never really prepared for. I knew we were near the end but Andrea recovered and came home. I cleared the dining room furniture and we had a hospital bed. There was nothing I could do for Andrea. You don’t want to see the love of your life like that. There was no way I could make her comfortable or do anything to end her suffering. I was exhausted. The house was really busy with lots of visitors, the district nurses were lovely. On Sunday 18th September, a Marie Curie nurse came to give me a break so I could try to sleep. Andrea passed away at 10.36pm. It was not peaceful. She made a big fuss before she went. Andrea was just 46 and her life force was very strong.

I made a promise to look after Ryan and Andrea’s mother (who had moved in with us) which I did until she passed away in September 2014. 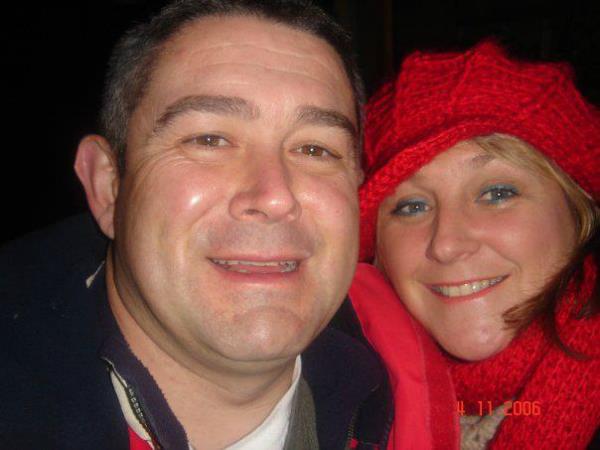