We are grateful to Amani and her father, Khuram, who worked with us in October 2020 to share her story here. Sadly, she passed away in February 2022. We remember Amani as we continue our work to raise awareness of this devastating disease and to fund research to help find a cure. She will be forever in our hearts.

The eldest of three sisters, Amani Liaquat was diagnosed with an aggressive brain tumour after collapsing at home on her 22nd birthday in April 2020. The coronavirus lockdown meant she had to endure brain surgery and numerous scans with no visitors allowed at her bedside during a 12-day stay in hospital. After standard of care failed to stop the growth of her tumour the family were left in the difficult position of having to source lifesaving treatment from Germany. Thanks to the generosity of family, friends and complete strangers, over £100,000 was quickly raised to help finance this.

Our lives changed forever the day that our beloved daughter Amani collapsed at home after suffering her first ever seizure. It was 29 April 2020, her 22nd birthday and the UK, and the rest of the world, was learning to live with dramatic changes brought about by the coronavirus pandemic. 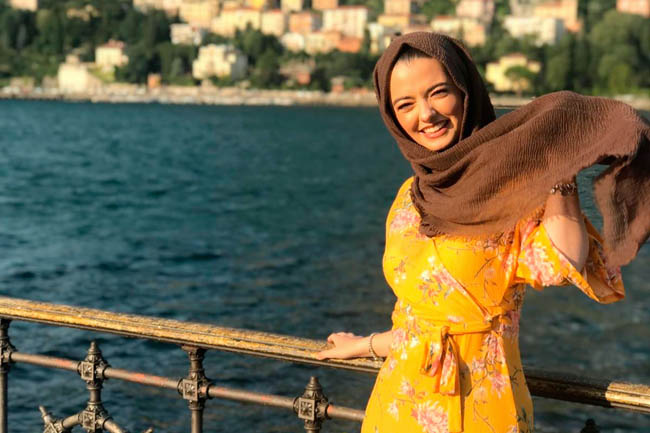 Just a matter of hours after the seizure, we were given the awful news that Amani had a brain tumour. She spent four days at the Luton and Dunstable Hospital before being transferred to the National Hospital for Neurology and Neurosurgery at Queen Square, London, for a biopsy. She spent a further eight days there during which time she had numerous scans and exploratory surgery which left her with 15 staples in her head. Due to Covid restrictions on visiting, she had to deal with all of that and difficult conversations with medical professionals all by herself. Amani coped amazingly well and was finally discharged on 10 May.

“As horrendous as all that was, the worst was still to come when, two days later, we were given the news that Amani’s tumour was a grade 4 glioblastoma multiforme(GBM) with H3K27 mutation, which was cancerous and inoperable.”

The tumour, a diffuse midline glioma, is particularly resistant to conventional treatment, its location being so deep in the brain that doctors concluded surgery was not an option

Distressingly, the treatment options for this particular tumour are very limited. However, on 26 May, Amani started the standard protocol of six weeks of radiotherapy combined with a low-dose chemotherapy drug. But following a positive Covid-19 test, in her first week of treatment, the chemo had to be delayed for a week. With all the family suffering from the virus and still in shock from Amani’s diagnosis, it was the most gruelling time any of us have ever experienced. 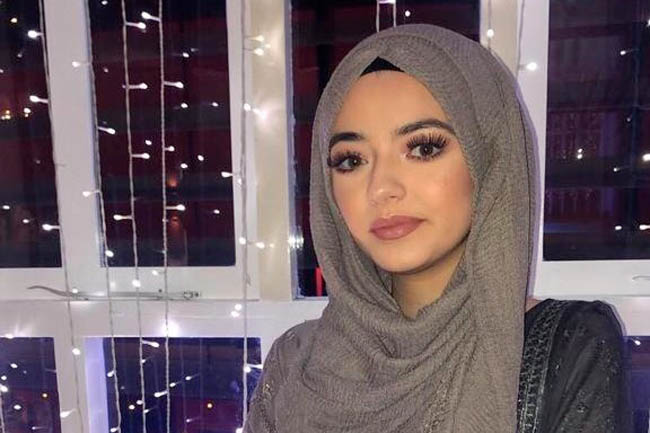 On top of all of this, Amani had to deal with difficult times in her personal life when her fiancé decided he no longer wanted to go ahead with their planned September wedding. Helpless and heartbroken, we watched our daughter decline physically, neurologically, mentally and emotionally.

“The implications of a brain cancer diagnosis are far more wide-reaching than one can imagine. Amani’s whole life was turned upside down in a matter of one month.”

Due to her illness, her studies and pursuit of her dream career was abruptly put on halt, her future plans in her own personal life were snatched away and all this while she was trying to deal with the uncertainty of her own health. The burden of such a change proved too much for Amani and for several months our daughter was a mere shadow of her former self. 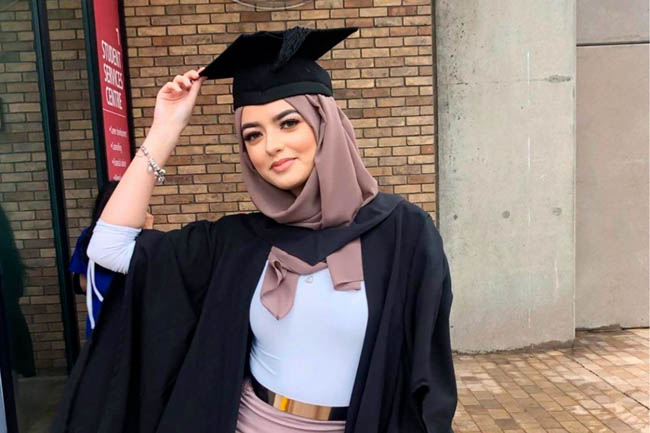 Amani has always been an inspiration to her two younger sisters. She had a complete zest for life and has a unique and charismatic character with the ability to touch the lives of everyone she meets. Always passionate about caring for others, throughout college she volunteered to help children with special needs. She performed exceptionally well in her A-levels and went on to secure a 1st class Honours degree in LLB Law from the University of Leicester. Her dream was to become a social worker and, in September 2019, she started a two-year Masters in Social Work at the University of Bedfordshire. Her wonderful character, her academic achievements and the promise she showed have meant it has been extremely distressing for all of her family and friends to witness how much Amani changed throughout this time. But, like the fighter she is, over the past month, Amani has started to become stronger every day and her old self is beginning to shine through once again. 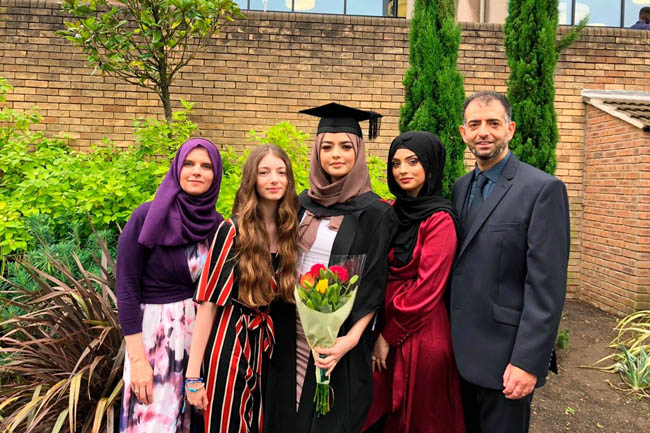 Amani was due to commence twelve cycles of chemotherapy in August but during her first round Amani was becoming a little unsteady on her feet and having bad pains in her temple. She had an MRI scan which revealed that, despite treatment, the tumour had grown. We were advised to stop the chemo which was utterly devastating but, we were even more determined to fight on.

Treatment options available in the UK for glioblastomas are very limited and, in discussions with her medical team, we decided the best way forward would be to access a new trial drug, ONC201. This drug is in Phase II trials in the US and is showing very promising results in fighting the exact mutation that Amani’s tumour has.

We had previously applied to access this trial drug under compassionate grounds from the US but had been refused. Travel to the US, was not feasible either due to the logistics of this and the prohibitive cost of travel insurance so we had no other option but to source the drug on a private basis from Germany.

We started a GoFundMe campaign to raise the money to do this. The drug alone costs £4,000 a month and, if effective, will require long-term use with the cost for a year’s medication and medical consultations in the region of £50,000 – far more than our family can afford. Thanks to the enormous generosity of friends, family and others in our community, we raised £100,000 in just 24 hours. We will always be forever grateful to everyone who donated and supported our campaign.

So, on 3 September I flew out to Germany to purchase three months of ONC201 and Amani will continue to take this for as long as she can tolerate it. I can’t help but think of other families who, like us, are having to somehow find the money to do this. We are all under enough stress without having to coordinate fundraising campaigns for life-prolonging drugs.

Through our own research, we know there are a number of other Phase II drugs, such as Paxalisib and VAL083 which have shown promising results in aggressive glioblastomas. Surely patients with such aggressive brain tumours should be able to access these drugs on a compassionate basis at least once standard of care has been completed and shown to be ineffective?

With aggressive glioblastomas, all the pathways to the tumour need to be blocked or impaired and this often means throwing everything at it including repurposed drugs which, although readily available, are not prescribed by the NHS. For this reason, Amani has also been on the privately-funded Care Oncology protocol for the past two months. So, very quickly we found ourselves in the position where we were having to privately fund the majority of Amani’s lifesaving treatment.  It is hard to describe just how frustrating this is and how desperate our situation has felt at times. But, with the kind generosity of over 4,000 donors and well-wishers, we at least have the financial burden lifted from us for a while.

In the long term, our aim is not only to focus on ONC201 but also on the current policy which stifles the use of trial drugs by threatening doctors with personal liability for patients they continue to care for. We need policies in place that allow doctors to actively encourage experimentation with new drugs where all else fails.

And I feel very strongly that we need the Government, organisations and charities to put pressure – or better still – to compel the pharmaceutical industry to release trial drugs on compassionate grounds without cost to the patients or through funding by the NHS.

We will continue to do all we can for Amani and pray that she is blessed with shrinkage of her tumour and easing of her symptoms and that we can hope to find a cure.  We have set up an Instagram page, @Fight4Amani, for anyone who is interested in following our journey.

If you have been touched by Amani’s story and would like to know more about our lobbying, research updates and fundraising opportunities, please sign up to our weekly e-news. 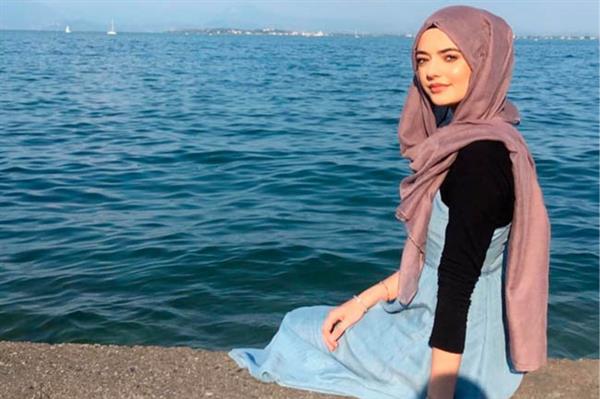