A farmer and keen hunting man, Adam was diagnosed with a high-grade glioblastoma multiforme (GBM) brain tumour. Surgery was not an option and he underwent chemotherapy and radiotherapy but passed away at home 11 months later, at the age of 42.

“Somehow Adam found the strength to cope. He was a trooper and his concern was always for others. His tumour was a grade four glioblastoma multiforme (GBM), the worst it could possibly be. I don't think Adam really knew how high-grade his tumour was, but he was aware that it was inoperable and the prognosis was bleak; he had probably just two years to live, five years at best. Radiotherapy and chemotherapy began and that took us up to March and he lived for just two months after that.”

Adam was a bachelor farmer, active in the community and with a busy social life. He followed the Braes of Derwent and Tynedale and Haydon hunts and had a tenanted farm, Camperdown, at Shotley Bridge, County Durham.

He reared Aberdeen Angus beef cattle and also had a herd of around 500 breeding ewes. He was my only sibling and my girls, who were lucky enough to have ponies on the farm, adored him. We were a close family, with mum and dad nearby.

We were having a get together for my husband Carl's birthday in May 2013 and, unusually, Adam was reluctant to attend. He'd hurt his back calving which was unlike him as he was so careful around the farm and with his animals. We noticed him limping and took the mickey a bit saying, 'come on Adam, walk properly.'

By the end of May, things had got worse and I noticed Adam was limping badly after playing with the girls and swinging them around in the garden. Dad said he ought to go to the doctor in case he had slipped a disc. Adam went to the doctor at the beginning of June and was later referred to the Royal Victoria Infirmary in Newcastle for a scan of his spine. It revealed he had damaged a disc as we suspected and then, just a week later, he started to experience pins and needles in his arm and it got so bad he couldn't hold a fork. We were worried that something wasn't right and he went back to hospital, this time for a head scan.

Within a couple of days we were given the devastating news that Adam had a brain tumour. Never in a million years did we suspect it would be something like that.

Adam was ruined. We all had a cry and we told him we were there for him and for whatever was to come - although none of us really knew what that might be.

When Adam had to go back to the hospital for a biopsy he was traumatised, worried about his livestock and anxious about what would happen to the farm. Despite his condition, all Adam could think about were his animals and how we, as a family, would cope.

Somehow Adam found the strength to deal with everything. He was a trooper and his concern was always for others. Adam's tumour was a grade four glioblastoma multiforme (GBM), the worst it could possibly be. I don't think Adam really knew how high-grade his tumour was, but he was aware that it was inoperable and the prognosis was bleak; he had probably just two years to live, five years at best. Radiotherapy and chemotherapy began and that took us up to March and he lived for just two months after that.

The disease and the treatment ravaged him and it was awful to see; his mind remained sharp but the physical changes were drastic. He had lost the use of his left arm straight after the biopsy and, as time went by’ he lost more of his mobility. Two months after Adam's diagnosis I gave up my job in order to look after the farm. We struggled on and I always called him the boss, he was in control and would just about manage to get around on a quad bike, telling me what to do.

It was important for Adam to know what was going to happen to the farm. He sat me down and told me he wanted me to know what to do when he was no longer around. It was a conversation I never wanted to have but it was so necessary. The farm was tenanted so we would need to sell up and move everything out. Adam talked me through it all.

Adam’s face was horrendously affected by shingles and, eight months after his scan, he started having seizures. Standing at 6ft 2ins and weighing 17 stone, Adam was a big, solid hulk of a man. As the disease took hold he didn't want anyone other than family to see what was happening to him. He had many friends and it was very hard turning them away and asking them to email to let Adam know they were thinking of him instead. It was difficult for so many people but we respected Adam’s wishes. Throughout it all, Adam was thinking of others and trying to spare their feelings.

Adam went from being a big, handsome bloke to a bed ridden decrepit shadow of his former self. This disease is horrific and something that nobody should have to go through. It was heart-breaking to watch but somehow you just cope, and go from day to day.

Dad worked hard to create a specially-adapted bedroom for Adam at home to ensure he was as comfortable as possible during his final weeks. Mum, dad and I did our best for him. Times were tough and we were exhausted but it was important to us all that Adam was at home with us. He passed away on 3rd May 2014 at the age of 42.

In accordance with Adam’s wishes, the farm sale took place in August. It broke our hearts but everything had to go to make way for a new tenant. At the end of the day I rode my brother’s hunt mare Tilly home. She’s a great big thing, a 16.2hh Clydesdale cross who had been with Adam since she was four. So that was it; game over. I haven’t had the heart to ride Tilly since, Adam adored her and she’s now 23 and living out her retirement as a lady of leisure, grazing in the field.

Throughout it all I had the support of my husband Carl who has got me through some very tough times. Dad had worked full-time with Adam when he first took over Camperdown and was invaluable in helping me to keep things going by doing all of the tractor work and later fixing up all of the machinery in readiness of the farm sale. Mum was always there, caring for Adam 24/7 at home.

Adam would have loved the fact that I am now working as Show Secretary for the Northumberland County Show so I am around farmers and farming all the time.

We feel very strongly about the dreadful underfunding for research into brain tumours and are sharing Adam’s story in the hope it will raise awareness. The girls’ schools have taken part in Brain Tumour Research’s annual fundraiser Wear A Hat Day and we have been doing other fundraising for the charity in memory of Adam. This August, Gracie, aged nine, and her sisters Lauren, 14, and Ellie, 12, are organising a sponsored cycle ride. Fundraising for Adam has definitely helped the girls dealing with their loss. Adam was a very private man in his illness but he would be proud to think that by talking about what happened to him we are making a difference for other people.

If you have been inspired by Adam’s story, you may like to make a donation via his niece’s JustGiving page www.justgiving.com/16milegracie or leave a gift in your will via https://www.braintumourresearch.org/legacy 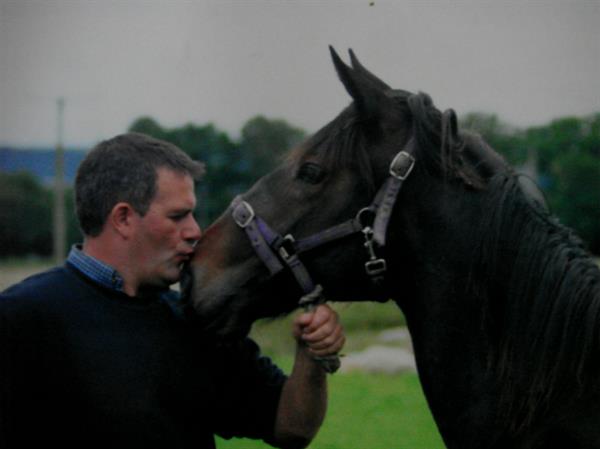