We are grateful to Adam who worked with us in October 2017 to share his story here. Sadly, he passed away on 23rd December 2019. We remember Adam as we continue our work to raise awareness of this devastating disease and to fund research to help find a cure. He will be forever in our hearts.

A seizure struck Adam down out of the blue and led to his brain tumour diagnosis. He underwent surgery, radiotherapy and chemotherapy and was well enough to take part in a gruelling cycle challenge in the heat of the Arizona desert. He completed the event with his father who, 15 years earlier, had lost his mother to a brain tumour.

“To be diagnosed with a brain tumour was a massive shock but I found a way to stay positive and this has helped massively. There is no doubt that a brain tumour diagnosis turns your world upside down. It is hard not just for the patient but for everyone around you. I am lucky that I have had such great support from my family.”

My brain tumour announced its presence out of the blue. I had got up for work on Monday morning and then next thing I knew I was lying in hospital with my family around me.

My partner Michelle called an ambulance as I had had three seizures. It must have been very frightening to witness and I am grateful that our daughter Ruby, who was seven at the time, wasn't awake to see it.

I had an MRI and CT scan which revealed the cause: a tumour in my brain. Two weeks later, on 24 May 2016, I underwent surgery at RVI in Newcastle, followed by radiotherapy and chemotherapy at the Freeman Hospital.

My tumour was a grade three anaplastic oligodendroglioma and I could have chosen to do nothing and waited to see if it grew. Faced with these options, I chose surgery because this was the quickest way to get it out of my head. Knowing that it had been taken away was a very positive thing. Follow-up treatment started three months after the operation with intensive radiotherapy and I also had chemotherapy which started in October.

I started work with Tesco in 2013 and at the time I was diagnosed, was a delivery driver. A seizure can mean that your driving licence is medically suspended and I count myself lucky that I was able to return to work, albeit in a different role but back to some normality with Tesco Extra in Gateshead.

In February 2017, I was fortunate enough to get back to work on a phased return and started with three shifts of two hours each. Over time, I was able to build that up and I hope that I will eventually be able to return to my delivery job.

To be diagnosed with a brain tumour was a massive shock, but I found a way to stay positive and this has helped massively. There is no doubt that a brain tumour diagnosis turns your world upside down. It is hard not just for the patient but for everyone around you. I am lucky that I have had such great support from my family including Michelle – we are now engaged to be married –my father, David,tragically lost his mum Janet Young to a brain tumour at the age of 57. That was 15 years ago when I was just nine, so to see me go through this must be particularly hard for him. I’ve maintained a positive mental attitude throughout this since the day of my seizures, and I fully believe this has helped my progress.

This October we cycled through Grand Canyon to Las Vegas together, almost 500kms over five days. We have raised over £6,150 for Brain Tumour Research which is funding vital research into finding better treatments for patients like me and, eventually a cure for brain tumours. Dad and I had signed up for the adventure way before my diagnosis, so after my chemotherapy and feeling well, to be given the green light from my consultant to go ahead and take part, was a massive achievement and meant so much. From being diagnosed, I knew it would be a challenge but have enjoyed every minute of it, especially sharing it with my dad.

If you have been inspired by Adam’s story, you may like to make a donation via JustGiving or leave a legacy in your will via https://www.braintumourresearch.org/legacy 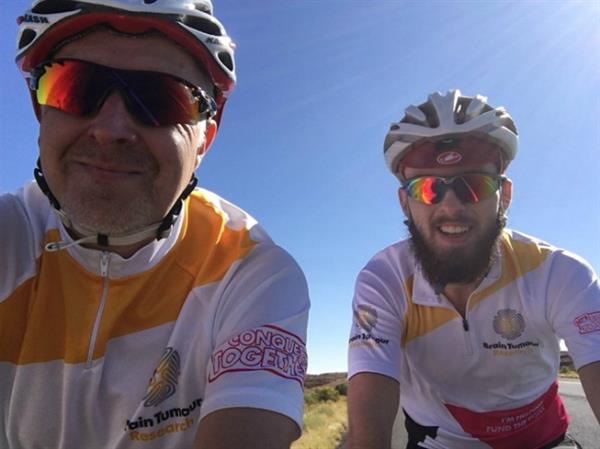