Former BBC correspondent and chair of BBC Children in Need, Rosie Millard, first realised something was wrong at the beginning of 2018, when she developed tinnitus in one of her ears. Doctors initially thought the ringing sound she was hearing was caused by a build-up of ear wax. Unsatisfied with the diagnosis, Rosie demanded an MRI scan, which revealed a large, low-grade tumour in her front lobe. As she is still coming to terms with her shock diagnosis and the surgery that followed, Rosie, a mother-of-four, is also feeling grateful that she has recovered well and is fighting fit – even going on to complete a marathon since her treatment finished.

I first experienced a ‘whooshing’ sound in my right ear in February 2018, when I was doing the Watford Half Marathon. When my doctor couldn’t find anything to explain the annoying, intermittent sound I was hearing, I was sent to an ear specialist, who also failed to diagnose the cause. I had a sinking feeling; the tinnitus wasn’t improving and I knew something wasn’t right and so, in May, I insisted on a brain scan. I prepared myself for the worst, thinking it might reveal early-onset Alzheimer's disease. I never suspected a brain tumour and couldn’t believe it when I was told they had found a very large meningioma – the size of a small apple. It was growing behind my right eye. I wondered whether the tumour was linked to a brain injury I had suffered in a car accident when I was a teenager but no one really knows the cause.

“There was apparently no rush to operate; they thought I had already been living with the tumour for around 25 years. But I knew that the bigger it grew, the greater the impact and I was keen to have it removed as soon as possible.”

Having said that, I had a glitzy event with Prince Charles coming up at the Royal Albert Hall and so I made sure the surgery was pushed back until after then. The event was for the charity Children and the Arts (for which I am the chief executive). Even though the impending operation was playing on my mind, I threw on my Jean Paul Gautier jacket and high heels and put a brave face on it.

My six-hour craniotomy, which was postponed until the summer, took place at the National Hospital for Neurology and Neurosurgery (NHNN), part of University College London Hospitals (UCLH). The optic nerve had become wrapped around the tumour and the whole thing was pressed hard against a major artery, so my surgeon, Mr Patrick Grover, had to sort of scrape it away in layers. Afterwards, I woke up with an impressive wound, held together with 40 steel staples. I felt like I’d been kicked in the head by a horse. Before the surgery, doctors said they wouldn’t be able to get it out all at once but somehow, in theatre, they managed to remove it in its entirety.

“When I received my diagnosis, I kept thinking, ‘Why me? I am fit. I run. I eat healthily. I am active. I have four children who depend on me.”

I soon realised, however, that this disease is completely indiscriminate. I broke the news to my children (who are now aged 15,17, 20 and 22) over a barbeque in the back garden on the evening of my diagnosis. My kids were really positive and encouraging, telling me that I would be fine. Other than my closest friends and family, I didn’t tell people about my brain tumour until after the operation. It was my way of coping. My sister and brother both work in the medical profession. I shared the news with them and they were really supportive and had every faith that I would be OK.

After my surgery, I put out a tweet, in which I paid tribute to the wonderful medics who looked after me throughout my ordeal and also to my employers and loved ones, who showed me so much love and care. Many of my contacts only found out about my brain tumour once they saw my tweet and so it was a shock to them but I wanted to reassure everyone that I was fine. I was amazed at how many people then got in touch, telling me that they had been through a similar experience. There is a whole brain tumour ‘community’ out there that I didn’t know about and I was shocked to discover that brain tumour kill more children and adults under the age of 40 than any other cancer… yet just 1% of the national spend on cancer research is allocated to this devastating disease. 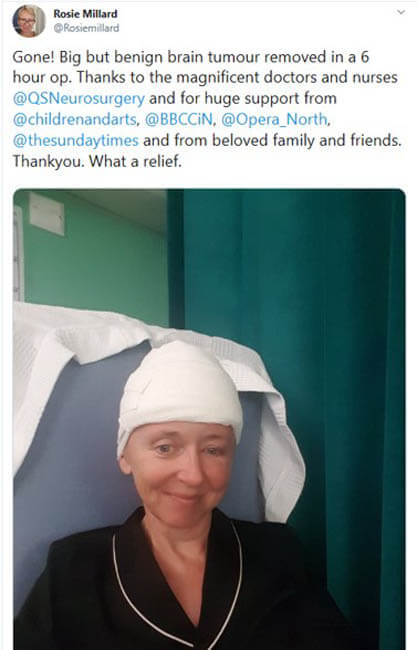 I am doing really well now but the near-death experience has certainly had a big impact on my life. It made me revaluate everything. Within months of my treatment, I made the decision to end my marriage. My brain tumour definitely provoked that.

Physically, I suffered some dizziness and interference with my sleep patterns but otherwise, I recovered really quickly. I obviously had to take some time off but I returned to work as soon as possible and just tried to carry on as normal. Running has been a big part of my life for many years and in terms of getting back to good health, I would say that it has saved me. In April 2019 I was well enough to take on the London Marathon, just eight months after my life-threatening craniotomy. This year I am once again signed up to run the London Marathon, as well as two more marathons in Scotland; one in Edinburgh and the other in Loch Ness. I have a lot to be thankful for; the first-class medical treatment, the kindness of family and friends, and the years ahead, which I intend to pack full of more activities than ever. Most of all, I am thankful that I listened to my gut and wasn't afraid to badger the medics until they agreed to an MRI.

“The advice I would give anyone dealing with a brain tumour diagnosis is to put your trust in the medical team looking after you.” 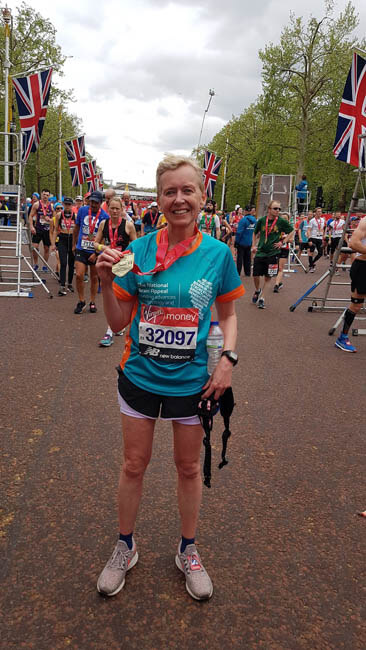 It is also advisable not to tell people about your tumour, other than family and a handful of close friends. When you say the words 'brain' and 'tumour', people immediately think you're about to die, and burst into tears. That’s not very helpful. My final piece of advice is to keep active and, if you can, run!  I have to have an MRI scan every year and a meeting with my neurosurgeon. The latest scan results were really positive; they confirmed the tumour has completely gone and there is no cause of concern. In actual fact my brain looks very healthy and I attribute much of that to the amount of running I have done and continue to do. I was back out running just eight weeks after surgery. It is a great distraction.

If you have been inspired by Rosie’s story and would like to know more about our lobbying, research updates and fundraising opportunities, please sign up to our weekly e-news. 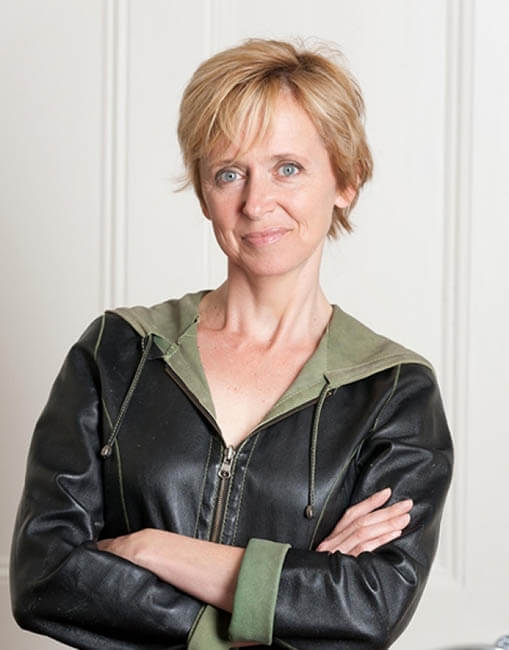