Nicole is a bubbly mother of two gorgeous girls. In 2008 her life changed dramatically - she found she had a tumour the size of an orange in her head.  Although the tumour was benign it took nine hours of surgery to remove it at the risk of her speech.  Despite the success of the operation she now has epilepsy, cannot drive, cook or bath her children.

Amazingly after all that, Nicole has come out fighting - she has a passionate desire to educate doctors about how to diagnose and then treat people with brain tumours.
I first felt something was wrong in August 2007 when I was working as an area manager for a beauty firm.  I visited my local GP because I was suffering from hearing loss. A grommet was fitted but this did not improve my hearing for long.  By October I could not concentrate properly on my job and I could hear whining noises in my head.  I remember thinking I didn’t feel right, but the doctor thought I had sinusitis and gave me a nasal spray.

A few weeks later I started to have headaches which were dismissed as stress and the trembling in my arms was put down to a trapped nerve.  However, when I queried my symptoms for a fourth time I was diagnosed with post-natal depression and given anti-depressants.

After Christmas 2007, I started to hear noises in my head and phoned the GP – he laughed and asked if I had been drinking.  I was so upset.  I thought I was going mad.  My husband Gary was so worried.  Then a few weeks later I was talking to a friend and I couldn’t get my words out.  They were all jumbled up.  Again my doctor thought it was stress, and later when I went back again feeling light-headed, confused and forgetful I was again given no help.  In the end we made the decision for me to give up work.

In February 2008, I had just carried my new baby daughter, Ellen, downstairs when I suffered a major fit and was rushed to hospital.  Brain scans revealed a massive tumour the size of an orange on the right side of my brain.  I remember being terrified and praying for my life.

Once the tumour was diagnosed as benign I still needed a frightening nine hour operation, which could have threatened my speech, to remove it. I realise that I was one of the lucky ones, my tumour was not only benign but it could be removed by surgeons.

I think of myself as a fairly up-beat, bubbly sort of person.  I have been married to Gary for 8 years and we have two gorgeous girls, Megan, six and Ellen, two.  We have lived in Leighton Buzzard for 10 years and up to this event we felt we lived fairly normal lives.  But life has changed for me since my near death experience.

Since my illness life has changed for me, I have a passionate desire to make a difference.  I especially want to improve the knowledge of the medical profession about brain tumours – to help them to recognise the signs of brain tumours and to care for patients affected.

Brain tumours are sometimes described as the ‘orphan disease’ because so little is known about them and consequently so little funding is allocated to them.   With more awareness I hope more funding will come for research and education. 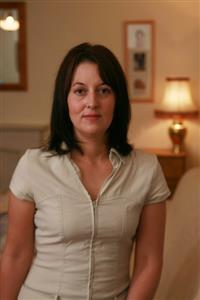