Nicola, 29, worked incredibly hard to land her dream job in the illustration industry. Based in Holborn, she lived a stone’s throw away from work and had ambitious plans for the future. Then, she had a seizure. Diagnosed with a grade 3 oligodendroglioma, her aspirations and independence were shattered. She gave up work and moved back to her family home in Godalming to get through surgery, chemotherapy and radiotherapy. Now in remission, Nicola hopes to return to full-time employment.

“The MRI revealed a devastating diagnosis: I had a brain tumour. It was heart-wrenching to be given the news and I burst into tears. I was sat in an appointment room with my mum, dad and several nurses, but felt isolated and alone. I didn’t want to see the scan and didn’t want to know the ins and outs of my diagnosis. I just wanted things to go back to normal.”

Life was going wonderfully. I’d landed my dream job with a small illustration agency, after graduating from the Winchester School of Art. I’d moved from my family home in Godalming to the hustle and bustle of London, living within walking distance of work in Holborn. It was the right job at the right time; everything had fallen into place and I was looking forward to a rewarding career.

Then, in October 2015, everything changed. I’d just completed a 5km run at the gym, as I was training for the Brighton marathon. I felt a bit funny afterwards, but put this down to over-exercising, and, without much thought, continued on with my day, meeting a friend for coffee. We chatted, had a catch-up and nothing seemed untoward – until I got up to leave. The last thing I remember was trying to say goodbye, but I wasn’t able to get my words out.

The next thing I knew, I’d woken up in Guy’s Hospital, and was told that I’d had a seizure. Apparently, my friend had caught me as I fell and then called an ambulance. I had an MRI scan and a blood test and, though the doctors weren’t letting much on, I could tell they were concerned.

The MRI revealed a devastating diagnosis: I had a brain tumour. It was heart-wrenching to be given the news and I burst into tears. I was sat in an appointment room with Mum, Dad and several nurses, but felt isolated and alone. I didn’t want to see the scan and didn’t want to know the ins and outs of my diagnosis. I just wanted things to go back to normal.

A few weeks later, in mid-November, I felt more desolation as I was told that my tumour was a high-grade oligodendroglioma. My parents were distraught and I didn’t realise just how much it would affect them; Mum had overcome lung cancer eight years before, so she had an idea of just how tough the journey ahead might be. I hated all the medical terms and I knew that I needed to give my tumour a name to make everything less scary so, one afternoon, while sitting with my flatmate, I decided to call it ‘Terry’.

I wanted Terry out as soon as possible and was scheduled in for surgery at the start of December. The operation was successful and 95% of my tumour was removed, though it was pretty daunting to be woken up during the procedure to talk, ensuring that the surgeon wasn’t damaging the healthy parts of my brain involved with speech. After surgery, some of my long, curly brown hair got stuck in the stitching in my scalp, and the surgeon had to re-open the wound and stitch me back up, which was extremely unpleasant.

Without much time to recover, I then had 33 sessions of radiotherapy, five days a week. I still managed to work part-time but I did sometimes get a little confused, due to the effects of the treatment. I lost some ability to communicate during the radiotherapy and also lost most of my hair and appetite. But I was expecting to feel a lot worse, and was only sick once.

Then, I began PCV chemotherapy. It involved six sessions, five weeks apart and I felt like my body needed a rest, so I took time off work. I also moved back in with Mum in Godalming, due to the mounting costs of rent and traveling to hospital appointments. When my white blood cell count was too low, I was put in isolation at Guy’s Hospital, to stop me getting an infection. This was horrible and I felt awfully alone. I read books and drew but my thoughts kept turning to my tumour. I had to keep telling myself I wouldn’t let Terry win.

An MRI scan in May 2017 showed that I was in remission and it was the happiest day of my life. Having been warned that my tumour may recur, I joined a London-based support group for brain tumour patients, The Shine Group, and talking about my diagnosis really helped.

Sadly, the elation I felt was short-lived. I soon fell into a deep low and was left with an empty feeling of ‘what do I do now?’. Losing a friend from The Shine Group to a brain tumour was crushing, as the reality of the disease sank in, and I found myself wondering when I was going to die.

With an increased awareness of how fragile life can be, I took a leap of faith and travelled abroad by myself, interrailing across Europe for a month, visiting cities including Lyon, Bern, Venice, Rome and Turin and making some great friends along the way. I felt liberated from the difficult times of my diagnosis.

The night I returned from my holiday, I had an abrupt wake-up call when I suffered from a nocturnal seizure. It was the biggest fright of my life. I fell out of bed and banged my head on a chest of drawers. Thankfully, Mum came to help. I wasn’t really aware of what was happening and, looking back, I’m very fortunate I didn’t have a seizure while abroad. I will be on medication to help control these seizures for the rest of my life.

Though I’m taking each day as it comes life is, on the whole, going well. I have some work lined up over Christmas in a coffee shop, and I’m excited to be spending the festive period with my parents and two sisters. It will also be great to catch up with old friends, who will be back in Godalming after moving away.

My diagnosis was a short, sharp shock and something I could never have imagined I’d experience in my mid-twenties. Thinking about the future is pretty daunting, so I try to live in the moment and give myself short-term plans and trips to look forward to. One day, I hope to run a children’s publishing company or to set up a coffee shop of my own, and I’m grateful to be returning to work next month. 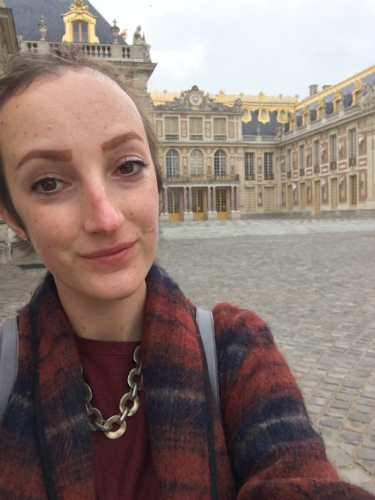