Nicci Roscoe is a professional inspirational speaker and corporate and lifestyle coach. Nicci's book, Fabulous Impact, is a guide to taking charge of your life and underpins her work to boost confidence and impact. In 2001, Nicci, a mother of two teenage children, was given the devastating news that she had a brain tumour.

Londoner Nicci Roscoe is a professional inspirational speaker and corporate and lifestyle coach.

She’s the author of ‘Fabulous Impact’ - a guide to taking charge of your life which underpins her work to boost the confidence and impact of those she works with one-to-one, in her master classes and at big conferences to audiences.

Nicci’s background is the world of health & fitness and fashion & beauty. Her varied career has taken her from being in the fashion, beauty and fitness department at Company Magazine to managing aerobics and teams across the network of David Lloyd Clubs.

She is also an experienced TV presenter and makes media appearances talking about newsworthy topics in her areas of expertise.

In 2001, Nicci, as the mother of two teenage children, was given the devastating news that she had a brain tumour.

During the 1990s I was working teaching aerobics and presenting on TV. I was incredibly fit and healthy. I did aerobics, ran seven miles four times a week, swam three times a week and ate moderately; in fact I was as fit and healthy as a person could possibly be.

But looking back now, during 1996 I had the first signs that something was wrong. I was aware during aerobics that my co-ordination would sometimes let me down and when I was speaking on the radio one day, I noticed my words were not connecting with my brain. I went to the GP who told me he thought I was stressed and overdoing it, and that I’d be wise to scale things back as he said this was a warning sign I might become more ill. I had various blood tests for hormonal imbalances, diabetes and thyroid problems but nothing came back as cause for concern, so I concluded it might be stress-related too.

I loved what I was doing then, so it was hard to scale back. But I dropped some of the personal training classes I was delivering, and thought this might be a sign I needed to reconsider my career. I retrained as an Interior Designer, thinking that might be a little slower or allow me to pace my work, but it was in fact even more stressful!

I was out shopping in Marks and Spencer in December 2001, when the disease truly made itself known. I was walking round the store in Temple Fortune, with a full trolley, when I experienced the most incredible head pain and light sensitivity. The pain was excruciating and I couldn’t speak, my mouth felt like it was full of marbles. I stood still, in shock, very distressed.

A kind security man wanted to call me a taxi to take me home, but after some time passed I became adamant that I needed to get home as quickly as possible, so I drove. It was very foolish in hindsight, but I was in shock and desperate to get back to my family. My partner took me to a GP who told me I had a bad migraine. I took lots of painkillers for three days, but the pain was still horrendous and my speech was slurred so we made an appointment to see a doctor who knew me better. Within that appointment he could tell I was not right. He knew I was a fit and healthy, articulate person, and as the symptoms were going on for longer than a typical migraine, he called a neurologist, who invited me in for a brain scan.

As I had private healthcare, I was lucky to be offered a swift MRI scan. I was terribly scared of the scanner; I felt claustrophobic before I trained as a Master NLP Practitioner (Neuro Linguistic Programming) and hated the feeling of being trapped in the tunnel.

It took several days for the results, and I kept busy trying to distract myself. I went shopping and was holding an armful of clothes when the phone rang and the neurologist told me they had found a cyst and I’d had a bleed in my brain, which had dried up. I was told I’d need to see a neurosurgeon immediately.

I then met Neil Kitchen, a neurosurgeon. He showed me the X-rays, which showed the golf ball-sized tumour - a benign Meningioma - deeply embedded in the left side of my brain.  My first question to Neil Kitchen was: “Will I survive this?” And I remember him explaining that if I didn’t have surgery, it was likely the tumour would affect me so much I’d become paralysed and incapacitated within two years and dead within five. Based on this, my partner and I agreed that the operation had to go ahead, despite its potential risks.

My daughter was to be thirteen on 1st February so we scheduled the operation for the end of the month. I could not face the operation over-shadowing her birthday, but there was also a chance I might not survive the surgery or I might wake up paralysed or unable to speak.

Having worked in fashion and fitness for many years, I know personally and through the experience of working with my coaching clients how important appearances are. Your appearance can affect your confidence and how you feel about yourself. It can also affect how others perceive you. I was absolutely mortified at the thought of having my head shaved and knew how much it would upset my children. I’ve always had long hair, but I asked if the surgeon could just shave half off, which he did. It softened the blow to some extent.

I woke up after the operation to see my Mum and feel her holding my hand. Ten days recuperation followed in hospital, then three months at home. I had three plates put into my head and six screws. (I like to joke that one of the screws is loose which it is!) I fought to regain my balance and walk properly. The biggest hurdle was getting used to the pain which I continue to live with to this day.

I have had help with pain management. I used to find my tongue swelled up if I got tired or emotional, but in recent years, this has stopped happening, mainly because I pace myself well now, and use techniques I have learned through my coaching to think positively and avoid overworking. Choosing to take this path in my life has made a huge difference.

Throughout my life, the main thing I have wanted to do is help others and, one way or another, this is what I have managed to do. So, after the brain tumour treatment and recuperation, I did a life-coaching course and trained as a Master NLP Practitioner. I had been through a life-threatening illness – which terrified me – but I had overcome many fears and wanted to help others do the same. Now I help people with their confidence and courage, help them to transform themselves and deal with the challenges they face.

I have a scan every three years to check the tumour is not growing although they were able to remove all of the tumour and my surgeon is confident it will not grow back. The brain tumour - particularly the devastating time of the diagnosis and the surgery - gave me a new way of seeing the world so that insignificant things don’t bother me anymore and the experience has helped me build a new profession. I feel like a cat with nine lives; I have had various careers already and am wondering what is next for me to look forward to in my life.

I want to do more to help Brain Tumour Research, to make a difference and build awareness of the disease. I am also a big advocate that positive thinking can help people get over the hugest hurdles in their lives. Positive thinking helped me and I want to do what I can to help others believe the same. 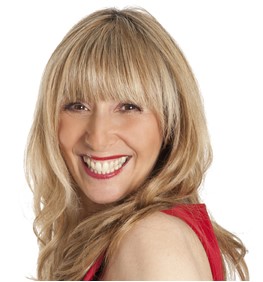