Leah was diagnosed with a high-grade medulloblastoma brain tumour at the age of two. She has undergone several operations and a gruelling regime of high-dose chemotherapy and radiotherapy. Now at pre-school, Leah has long-term side effects including problems with her speech and mobility.

“Our little girl was so diminished by the treatment that I pleaded with her consultant not to go ahead with the last two sessions. I felt I could no longer put her through the daily ordeal of a general anaesthetic, of being taken from my arms and laid down on what seemed to me to be a cold slab, and pinned down by a face mask. In the end, I felt we had to trust the doctors and Leah did complete the course of 31 sessions over six weeks. For Leah it was normality and she probably assumed everyone did it; it was worse for us.”
Leah’s mother Joanne tells her story:
Leah had just turned two in the summer of 2013 when little alarm bells started to ring. Our eldest daughter Jasmine was six and, compared to her, Leah was lagging behind when it came to developmental milestones in her speech and mobility. Whereas previously she had been happy to walk she wanted to spend more time in the pushchair and her behaviour changed in other ways.

It was more than just toddler tantrums. Leah became very moody and didn’t really want to play. It became harder to get her into her car seat, to choose her clothes for the day and have a wash. If she didn’t want to put her shoes on she would throw herself down, crying or curl up into a ball on the sofa. We had brought both girls up the same way and yet things were turning out so differently with Leah.

I was working part-time at a travel agent in Paignton and mum was helping me out with childcare. The timing of our holidays that summer meant mum didn’t see the girls for three weeks, she immediately noticed the deterioration in Leah’s condition. She was a little girl who should have been developing rapidly but it seemed as if she was going backwards.

When we saw our doctor in November, he referred us to a paediatrician to check Leah’s mobility. As we waited for the appointment in mid-December we became increasingly anxious so went back to the GP. This time we were sent to A&E at Torbay Hospital. A paediatrician was waiting for us and organised scans on Leah’s legs and hips. There was a possibility that the problems were being caused by an infection of some kind or there was an outside chance that it was neurological. I thought maybe Leah was on the autistic spectrum; that would explain her behaviour.

On 4th December, Leah had an MRI scan. Less than two hours later we were taken into a little room to be told that Leah had a “mass” in the back of her head. My husband Wayne buried his head in his hands while I collapsed on the floor, crying. Leah was just two-and-a-half and remained under the general anaesthetic needed for the scan as we tried to comprehend the horrific news. It is impossible to explain how it felt in what was, at that point, the worst possible moment of my life. It was as if my whole world was over. I didn’t know what to think and I suppose, deep down, we didn’t really want to confront what it might mean.

I was terrified that Leah had cancer and that she wasn’t going to live. We were taken to Frenchay Hospital in Bristol by emergency ambulance. Our driver was Peter Jordan who, like us, lived in Paignton. I didn’t know this at the time but Peter, who is now a fundraiser for the charity Brain Tumour Research had lost his own father to a brain tumour just months before.

The journey to Bristol took around two hours and when we arrived at the hospital it was cold, dark and wet. I was scared and felt as if I had been transported into another world. Wayne had followed in the car and it was a relief when the three of us were back together. I was shell shocked as we were settled in for the night. I counted down the hours by watching Leah as she slept soundly, no doubt exhausted and with the effects of the general anaesthetic still in her system. She was critically ill but looked as if she didn’t have a single care while I could feel the weight of the world on my shoulders.

The following day, 5th December, Leah had another general anaesthetic and a drain was fitted to relieve the pressure caused by a build-up of fluid in her head. Having been told that the “mass” was a brain tumour but without knowing what this really meant or even if it was high-grade or low-grade, we were allowed to leave hospital the following day. Save for a small chunk of missing hair and a little plaster on her head, no-one would have been able to tell the nightmare of the past few days. We continued with our plans to take the girls to see Father Christmas and somehow got through each day on autopilot.

We were back in hospital on 11th December to prep for surgery the next day. As a parent, the hardest thing you can do is to give over control of your child to someone else but this is what we had to do.

We tried to occupy ourselves as best we could. Jasmine was with my parents and Wayne and I did some Christmas shopping for the girls. Less than four hours into what we had been told would be a ten-hour procedure, we had a call asking us to go back to the hospital. The neurosurgeon was waiting for us and the news was very bad. The pins used to hold Leah’s head completely still for the delicate neurosurgery had somehow fractured her skull. The procedure was stopped for a CT scan and it was decided the operation would have to be aborted so the damage could be repaired.

A week later, on 19th December, Leah went back into surgery to have the tumour removed. This time, we stayed in the hospital and, this time, the operation lasted for the full ten hours. Afterwards Leah looked so fragile she was very lethargic and wouldn’t drink anything. The tumour, which had grown to the size of an adult fist, was removed. A follow-up scan showed that there was residual tumour and a haematoma had developed. Four days before Christmas, Leah was back in surgery to have the remaining tumour and the haematoma removed.

I was with Leah in recovery when one of the neurosurgeons came in and told me the tumour looked “nasty.” By the time my husband re-joined me, I was broken and on the floor in tears. Leah had cancer. The tumour was a high-grade nodular medulloblastoma and chemotherapy would begin within four weeks.

I’m not sure how we coped but I had to be there for Leah and I would climb into the hospital bed and cuddle her. Despite our love and care I didn’t feel as if she was coming back to us after the surgery. It was six days later, on 25th December that she finally opened her eyes and ate some chocolate buttons. She made a tiny sound of enjoyment and worked her way through a whole packet. It was the best Christmas present ever – Leah was awake and eating.

Disappointingly, Leah still wasn’t chatting but she would point at things and make the occasional grunting noise which was very distressing. You could look at her and it was as if she was shut off and not really there. She was suffering from Posterior Fossa Syndrome (PFS) which is a collection of symptoms, including mutism, ranging in severity which can occur in children after surgery to remove some brain tumour types. We were told the condition was temporary and we must wait and see if it would be weeks or even months before Leah started to recover properly.

Despite this uncertain prognosis, it felt so good to be finally home from hospital on 14th February. Chemotherapy was already under way and we travelled to Bristol for high-dose treatment with Methotrexate five days a week for four weeks while low-dose treatment took place in Exeter. Leah was prone to infection and there were many occasions when she would spike a temperature and be admitted to hospital for two days.

Leah had an MRI scan every eight weeks and the final post-treatment one on 23rd October showed the tumour had gone. We felt amazing, the doctors were pleased and it was the best possible outcome at the time.

Our joy was short-lived; three months later the tumour was back. We had no indication that anything was wrong when it was picked up in a routine scan. Leah seemed so well yet the tumour was already 1.5cm. It was a deeply shocking reality check and I was hysterical. Radiotherapy had not been possible before because of the associated risk to the development to such a young brain but now Leah was three and circumstances had changed.

We were back on a gruelling treatment regime, travelling to Exeter Monday to Friday for four weeks. Our best hope was that radiotherapy would keep the tumour stable and I felt broken when the next scan showed the tumour was growing again and had spread to her spine. I was so distressed that I was angry as I looked over at Leah and told her I thought she was tougher than this and she should sort herself out.

If we were to make progress in this battle, chemotherapy was needed once more to make the tumour more susceptible to radiotherapy. As a result, Leah had severe burns on her neck and at the top of her chest. She was uncomfortable and in pain, moody and lethargic. Our little girl was so diminished by the treatment that I pleaded with her consultant not to go ahead with the last two sessions. I felt I could no longer put her through the daily ordeal of a general anaesthetic, of being taken from my arms and laid down on what seemed to me to be a cold slab, and pinned down by a face mask. In the end, I felt we had to trust the doctors and Leah did complete the course of 31 sessions over six weeks. For Leah it was normality and she probably assumed everyone did it; it was worse for us.

The treatment finished in November 2015 and by January Leah was able to attend pre-school for three days each week. Her limited speech made her shy which in turn meant she had difficulty making friends and was often isolated from the rest of the class. Small things became a big deal and it meant the world to me when a teacher gave me a photo showing Leah holding hands with another pupil.

Leah will be five in July and I feel, at long last, we are making progress. She continues to see a speech and language therapist, can’t run around and prefers to have a hand to hold when she’s walking.

We now await her first post-treatment scan with trepidation. I am petrified we will have the rug pulled from under our feet again. My hope is that Leah will remain tumour-free and that we can help her towards a way of life in which she can enjoy as much independence as possible, living within her means and managing to overcome the long-term side effects of her diagnosis. 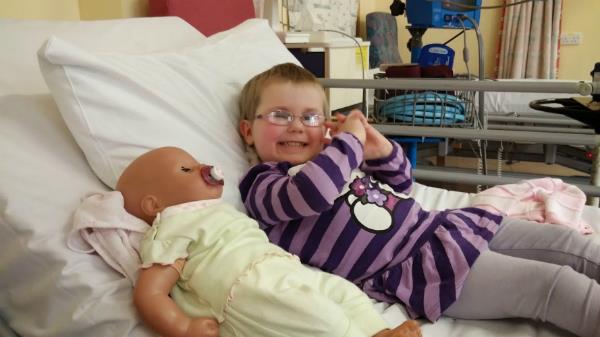