Ian lives with his wife, Debi-Ann, and their beloved dogs.  He believes in healthy living and follows a strict nutritional plan.  Before he was diagnosed with a grade III oligodenroglioma, he had never had any serious illness or been admitted into hospital.

Originally I was diagnosed in the spring of 2011 with suffering from migraines, but the symptoms seemed too severe. Then in June 2011 I got up in the night and had one arm over my head and the leg was going the other way. I wondered whether I was suffering with a more severe type of cramp or food poisoning.

The following month, we went away on holiday and were surfing.  I got on my board and nearly drowned due to a seizure, yet I was only in a foot of water. Then I had two occurrences on the train where I couldn’t control my right hand side for a minute.

By this time I had started to get inklings that something was not at all right so I went to see the GP who referred me for an MRI scan.  Normally this would have been a six week wait, but through work we had a contract with University Hospital, Birmingham, so I was able to get an appointment just one week later with a neurologist.

The scan revealed that I had a brain tumour, which I later discovered was an oligodendroglioma.  I was quite prepared for it to be honest.  There were two nurses in the room as well as the consultant, so I knew it wasn’t going to be good news.  My wife, Debi-Ann, however, found it incredibly hard to take the news and was hyperventilating.  I wasn’t scared, except when the consultant mentioned brain surgery, because I immediately thought he meant “awake craniotomy”, which it didn’t turn out to be, fortunately!  I do recall, however, a very stern Russian nurse coming in to get me to sign the consent form, outlining all the risks within 30 seconds, including that I could die, be paralysed or have a stroke, before brusquely saying: “But you haven’t got any choice, have you?”   It didn’t seem like she was joking either!

I was in surgery for two hours and they got most of the tumour out, but I was told it was grade III.

My coping mechanism was to turn to nutritional therapy alongside conventional medicine and completely change my diet to maximise my chances of survival.

Debi-Ann, who is a nutritional therapist and runs www.nutritionmission.co.uk, brought in food for me to eat so that I kept to a healthy diet, rather than the hospital food, which included such sugar-laden delights as jam roly-poly!

The day after I returned home we had to have one of our dogs put down, which was a particularly traumatic time and we had already lost another dog at the beginning of the year.  We decided to get a Cocker Spaniel puppy soon afterwards and we also have two German Shepherds, so I keep healthy through all the dog- walking too.

I had daily radiotherapy for six weeks afterwards, which wasn’t too bad and I didn’t really have any symptoms – probably due to the supplements I took and the nutritional advice I received from Debi-Ann to keep to a strict diet.

I was lucky in that I had no problems with my memory and managed to go back to work one week after surgery, although I worked from home for three months.  I didn’t want to lie around – it would have been too boring.

I was still suffering with seizures though and had five or six after the craniotomy, which worries Debi-Ann because she fears I could have one crossing a busy road, for example, but I don’t want to be wrapped up in cotton wool.  I want to be able to just get on normally and I have had no seizures for the last five months now.   The hardest thing is not being allowed to drive.  I suppose I am really lucky – some people end up losing their job as well.

I am having scans every two or three months and I don’t get worked up beforehand about them.  I take the attitude that if it grows, it grows. Luckily, my last MRI showed that the tumour area was healing and the tumour wasn’t even visible where it had been on previous scans.

I have never known anybody with a brain tumour and have never had any serious illnesses before or been into hospital so this has all been a real eye-opener to find that I have gone from nothing to the worst illness I can think of.

I am consciously not reading up about brain tumours because I want to stay focused and positive.  I eat lots of fish and vegetables and drink rice milk, (avoiding gluten, meat, dairy, alcohol and sugar) which I totally believe was the reason I managed to stay so symptom-free through my radiotherapy.

There are two routes I could take after the operation: the healthy one that I have taken, or the drinking and eating anything so I enjoy the time I have left, but I believe that would mean a much higher risk of the tumour growing back.

My whole outlook is that I am a believer in fate. So long as I’ve done everything possible within my power then I’m confident of a good outcome. I am now able to drive once more, am working as an IT consultant in Birmingham, and feeling well. I am still careful of what I eat and drink. I am now down to have scans every six months and we are very positive. 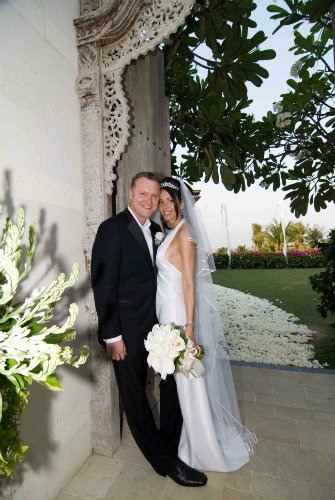