Flora had just started studying for A-levels when she began to experience strange feelings of nausea, hot flushes and partial seizures. She was finally diagnosed with a low-grade brain tumour in February 2016 and underwent surgery because of worsening epilepsy. Despite suffering from post-operative depression, she gained a university place to study chemical engineering. Now, two years since her surgery, she feels extremely lucky and is determined to change misconceptions about brain tumours amongst her peers.

“Looking back at my experience, I often realise how lucky I am. I’m fortunate that it all went well and I’m living more or less normally. The situation forced me to grow up and mature more quickly and I now understand the value of life. I can see how fragile and unpredictable it can be and I’m definitely more positive. Small issues that used to get to me don’t really matter now in the grand scheme of things.”

My parents wanted to escape city life and we moved to the country when I was child. My older brother Henry and I had a wonderful childhood, playing on the farm which was our new home, building dens and treehouses.

My mum has always been a keen horsewoman and I grew up around ponies and started riding when I was tiny. I was just seven or eight when I got my first pony and really got the bug for riding. Following my diagnosis, I was allowed to continue but warned I could have a seizure and fall off but after surgery I was banned from riding for a year – that was one of the hardest things for me to deal with.

I also struggled with the impact my diagnosis, and particularly the surgery, had on my studies. I have always been quite analytical and liked science. My grades were good and I achieved 11 A*s at GCSE. I have always had high expectations of myself, especially academically, and just want to do my best and so it was especially difficult that I first became ill as I started my A-levels. It was September 2015 and I was 16.

From time to time, I would experience these weird sudden feelings of nausea, hot flushes and distorted hearing, which would leave me feeling a bit spaced out for a short while. Only later I found out that these were actually partial seizures caused by my tumour.

After a few weeks, I went to my GP. I had a difficulty communicating my feelings as they were so non-specific. My GP thought it was possibly something with my balance so I was told to have my ears syringed. There was no suggestion that I should be referred for any other tests even when that didn’t help.

On 24th January 2016, we had a family dinner and I wasn’t feeling myself. I was quite tired after a party the night before and, when I began to feel hot and a bit nauseous, Dad suggested I should go outside with a glass of water. However, I don’t remember coming back in: I had experienced my first tonic-clonic seizure. I woke up later in Milton Keynes hospital not knowing what had happened. I was really confused, I said: “Mum, I was just feeling a bit tired, why did you call an ambulance?” She responded: “Flora, you had a seizure!”.

The hospital did not perform any further tests but referred me to a seizure clinic. I never went as my dad found a neurologist at UCLH, the National Hospital for Neurology and Neurosurgery in London, and we had a private appointment at the beginning of February.

Before the appointment, I had my first MRI. It was long and noisy. The doctor said that they had found something on my scan and it looked like a low-grade tumour. I remember just being panicked when I heard the words brain tumour. One of the few things I was worried about was: would I still be able to ride?

After the diagnosis, I often thought how unfair my situation was. I had always been very healthy and sporty; never ill.

The seizures kept increasing and the medication was not helping. The initial course of action was to “watch and wait”. But as the epilepsy was getting worse, my family and friends started pushing me to have the tumour removed. I remember being annoyed about the pressure from others. It wasn’t an easy decision to make.

After seeing a neurosurgeon who suggested that the second scan might have shown a slight change, I panicked and made a list of pros and cons. Not being able to ride for a year was one of the big disadvantages of having the surgery, but because the seizures were dragging me down so much, I decided to go for it.

I had my operation on 18th August 2016 at UCLH. It lasted eight hours and they managed to remove the tumour completely. The biopsy results classified my tumour as a grade 1 glioneuronal tumour.

Although the surgery went well and I was released after four days, it was the aftermath that really took its toll on me. I was always tired and suffered from post-operative depression. I would get upset for no obvious reason and cry a lot. That did not improve much when I went back to school at the end of October. I would sit in class and suddenly become emotional. There was a lack of understanding from teachers and my fellow pupils. Some people must have thought that I was crazy.

Sometimes, I would get confused or lost for words. As a result of that and my tiredness, my grades dropped and my overall academic performance worsened, particularly traumatic for me as I was used to being an A* student. Looking back, I really wish there had been more support from my school. I found that many people don’t realise the full impact of brain surgery and it was difficult to communicate the complexity of the issues I was dealing with.

Despite all of this, I managed to complete my UCAS application and got an unconditional offer to study chemical engineering at the University of Nottingham. If I hadn’t received such good GCSEs, I probably would have never been accepted.

Apart from the psychological effects, which were slowly improving, I stopped having seizures and started riding again after a year. Going to uni was great. It was like a fresh start. I met new people who didn’t know me so it was a bit easier to talk about my diagnosis. I decided to be more open and correct people’s misconceptions about brain tumours and the impact of neurosurgery. I hope that telling my story can raise awareness and make people understand how traumatic and challenging these events can be, especially for a young adult.

Looking back at my experience, I often realise how lucky I am. I’m fortunate that it all went well and I’m living more or less normally. The situation forced me to grow up and mature more quickly and I now understand the value of life. I can see how fragile and unpredictable it can be and I’m definitely more positive. Small issues that used to get to me don’t really matter now in the grand scheme of things. 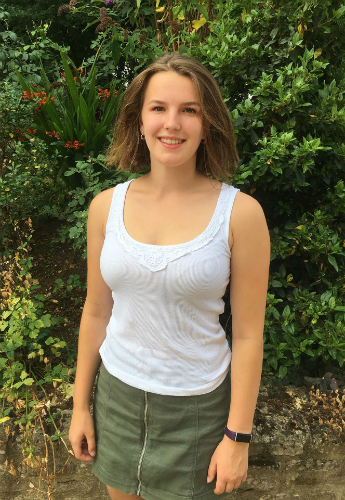