David has undergone surgery, radiotherapy and chemotherapy since being diagosed with a grade three anaplastic oligodendroglioma in July 2017. His tumour has caused a large social and economic burden as well as the psychological difficulties to not knowing what the future for him, his wife and their son, will bring.

“It is difficult to convey just how much our lives have been changed by my diagnosis. I haven’t been given a prognosis as such, perhaps the doctors are scared to tell me. No-one knows how long I have had the tumour and, just now, I don’t know if I’ll be here for another four or five years or whether I’ve got as little as two months. It’s ironic to think that prior to my diagnosis I had stopped drinking, I’ve never smoked and have always been fit. It is hard to understand how this could happen to someone like me and not knowing what the future will bring is by far the hardest thing.”

My first seizure lasted for around 40 minutes and my wife Helen told me later she was terrified as my face turned grey, my right side started to jerk while my left side went poker straight, I started to foam at the mouth and was sweating profusely.

For me it was more like an out of body experience and, as I started to come to, I was being carried down the stairs by paramedics. Our son Josh, who was nine at the time, saw it all. He is type one diabetic so used to seeing medical things going on around him which I suppose must have made it a little bit easier for him.

A CT scan and MRI revealed there was an abnormality in my brain although, in the early stages, no-one ever used the dreaded expression “brain cancer.” In fact, the first time I heard those words was when a Macmillan nurse sat on my bed. She was mortified when she realised she had broken the most devastating news to me so casually and in an open ward which afforded no privacy as I struggled to take on board what it all meant.

My case was quickly referred to a multi-disciplinary team and in August 2017, within days of my seizure, I was in surgery in the neurological unit of the Royal Victoria Hospital in Belfast. The procedure took almost twice as long as the two-and-a-half hours we were told to expect but was successful in debulking my tumour, a grade three anaplastic oligodendroglioma which had grown to 6cm x 4cm in my left frontal lobe. We already knew the tumour was very active as it had grown in a matter of days between two MRI scans. I am left with the remains of my tumour and no left frontal lobe.

It was only a few days before I was discharged to recuperate at home. I have had radiotherapy with the aim of keeping the tumour at bay for as long as possible – and the MRI scans taken before chemotherapy started in December showed the tumour had not started to regrow. All signs were good heading into chemotherapy but two cycles in, my sessions are being extended past the usual six weeks because of problems with my blood count and an allergic reaction to one of the chemo drugs.

The main side effects from my surgery were the impact it had on my cognitive function and speech. Fortunately, with the help of therapy my speech has improved but I still struggle with my cognitive function. One of the hardest things has been having to hand back my driving licence and also the wider impact the diagnosis has had on the life of our family.

I had previously been employed in the tile and bathroom industry. My dream was to have my own business and, with Helen’s help, managed to open my own tile and bathroom showroom but we had to close it after just two months in business. The uncertainly over my future, the changes the tumour and my treatment have brought about in my personality, and the disruption caused by multiple hospital appointments just meant it was not viable to continue. Helen left her own job to help me with the business and has now had to go back to work to help us stay afloat.

My treatment has left me with very little motivation and, like so many others who have been through neurosurgery, I struggle with extreme fatigue. Helen says I am a shadow of my former self and I find the immense changes which my diagnosis has brought about very difficult to bear. I can no longer run like I used to or cycle but I am still able to enjoy gardening although it’s not something I am ever likely to be doing for hours on end as I used to.

I am trying my best to be a normal dad but I find it difficult to keep my emotions in check and have to take care around Josh not to let my anger get the better of me as sometimes I resort to shouting and I don’t want his memories of me to be like that.

There have been physical changes too, I don’t look like myself any more, my face shape has changed and my hair hasn’t grown back properly. During the surgery a substantial “trap door” was made in my skull to give surgeons access to the tumour and that’s a fairly major thing to go through.

Helen and I have been together for 14 years and were married in 2006. It is difficult to convey just how much our lives have been changed by my diagnosis. I haven’t been given a prognosis as such, perhaps the doctors are too scared to tell me. No-one knows how long I have had the tumour and, just now, I don’t know if I’ll be here for another four or five years or whether I’ve got as little as two months. It’s ironic to think that prior to my diagnosis I had stopped drinking, I’ve never smoked and have always been fit. It is hard to understand how this could happen to someone like me and now knowing what the future will bring is by far the hardest thing. 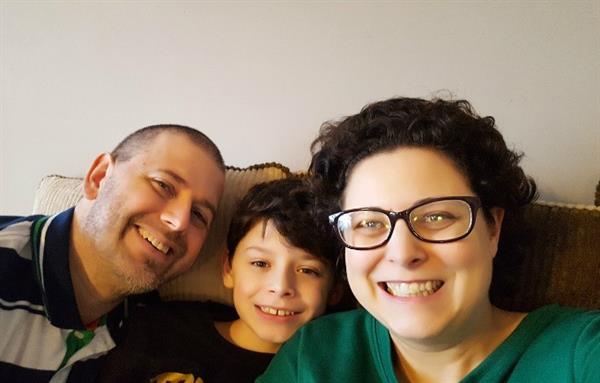