Grandma-of-four Beatrice, an artist, was 30 years old when she was first diagnosed with an acoustic neuroma brain tumour, which was removed by surgery. She thought she had seen the back of the disease when, in 2014, an examination following a minor head injury showed that her tumour had recurred. While recovering, Beatrice learnt to paint and now, having recently celebrated her 50th wedding anniversary, she is sharing her story to bring hope to patients and families.

My husband Huw and I recently celebrated our golden wedding anniversary and after 50 years of marriage, he has helped me through the darkest moments of my life – including two brain tumour diagnoses.

“We met while at school and tied the knot aged 22. In July 2019, to mark our anniversary, I decided to raise money for the charity Brain Tumour Research, by taking part in the Do Lunch! campaign. I want to help brain tumour patients and their families, as I feel very fortunate to have survived the disease.”

Register for Do Lunch! 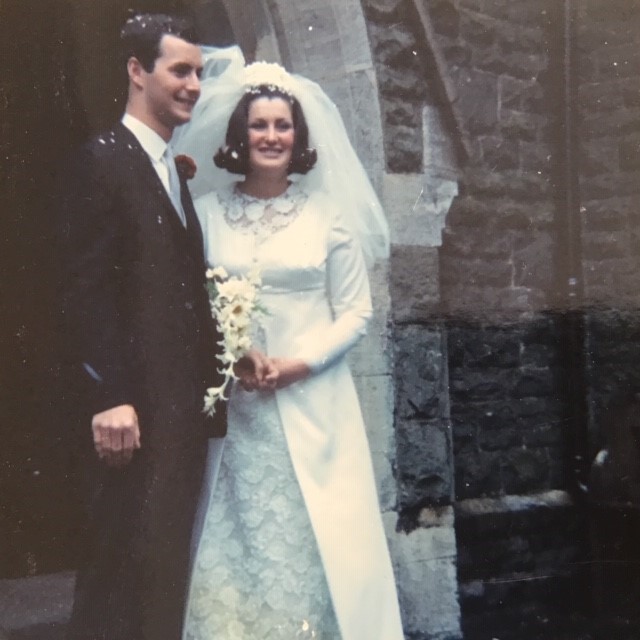 I was a 30-year-old mum-of-two and enjoying life as a pottery teacher when I was first diagnosed. My son Alun was just six and my daughter Mari four, so it was hardly the most ideal time. I’d been experiencing problems with my hearing for a few months; I couldn’t hear anything out of my right ear so I decided to get things checked out.

“I assumed it was simply a build-up of ear wax; I could never have imagined I was living with a brain tumour.”

I had a number of tests at Singleton Hospital, Swansea, over the coming weeks and the doctors suspected otosclerosis. It was 1977, so before the time of MRI scans. The worst part was having a myelogram, a type of X-ray, where dye is injected into the spinal cord. It caused the most intense headache and when I got the results of the scan my world was turned upside down.

“I was diagnosed with an acoustic neuroma and was admitted to the neurological ward. I couldn’t believe the news. A couple of ladies from Ystradgynlais had also been diagnosed with a brain tumour, and that brought me comfort.”

The tumour was attached to my auditory nerve which explained my hearing loss. Just days later, I had debulking surgery. Nowadays, as my tumour was low-grade, I don’t think I would have had such an immediate operation.

I’ll never forget my children visiting me in recovery. The procedure damaged my facial nerve, causing my face to droop to one side. Alun remarked: ‘Mummy, why are you giving me half a smile?’ and I promised him the next time he visited I would give him a full smile.

When I was discharged, I signed up to a government scheme known as Lifelong Learning, which offered classes for the elderly and people who had been diagnosed with a long-term illness. I learnt how to paint and this helped build the confidence that I had lost while recovering from my brain tumour. Looking back, this was by far the best thing to have come from such a tough time. I continued to paint throughout my life and now, 40 years later, I have my own website, Art by Beats, where I sell my work.

“The best feedback I had was from a customer who told me how happy my painting made them. I’m glad something so positive has come from my brain tumour diagnosis and painting really helped me find my feet after a difficult period.”

Each time I paint I’m excited and wonder which way my brush will take me. I love contrasting a dark building against a pale sky, or a white cottage against dark trees. I try to capture nature’s beauty and Welsh cottages sitting comfortably in their surroundings. 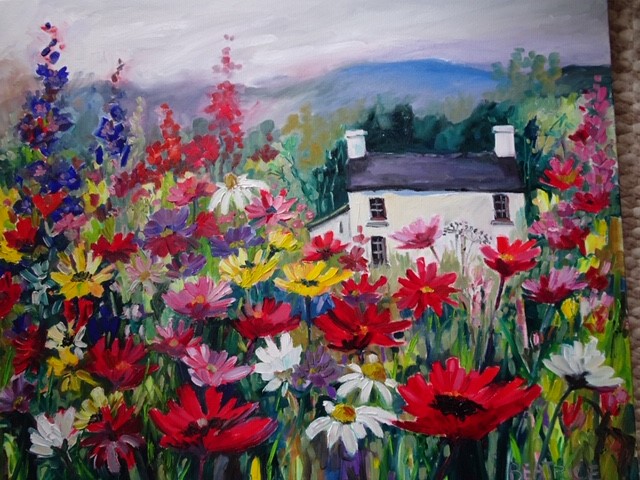 After MRI scanning techniques were introduced in the 1980s, I had a scan every year and thought I’d seen the back of my tumour.

In August 2014, however, I suffered a minor injury after I hitting my head on an open cupboard door. I saw my GP in Ystradgynlais as a precaution and, worried that I had concussion, he referred me for a scan at Morriston Hospital, Swansea, ‘just in case’.

“When I received the scan results, I was astounded that my tumour had recurred. I couldn’t believe it and I was in an awful state. Now happily retired, I couldn’t bear the thought of going through the pain all over again.”

Thankfully, things have improved a great deal since my first diagnosis and my experience with the medical staff was second-to-none. While I was adamant that I wanted surgery, my consultant said that a ‘watch-and-wait’, no treatment option, would be the best thing to do, as my tumour is low-grade and growing towards my skull not my brain.

I have massive trust in the medical staff and in hindsight I think surgery would have been quite traumatic at my age. I’m grateful that since 2014, my tumour has remained stable.

While so much changed between my brain tumour diagnoses, the support from my family never faltered. I’m blessed to have four grandchildren: Alun has two children, Bryn and Kerry, 13 and 11, and Mari is mum to Josef, 18 and Anna, 13. Josef is starting a course in sports therapy at Carmarthen University in September and I’m so proud of him. Alun and his family live in Canada so we enjoy visiting them at least once a year. 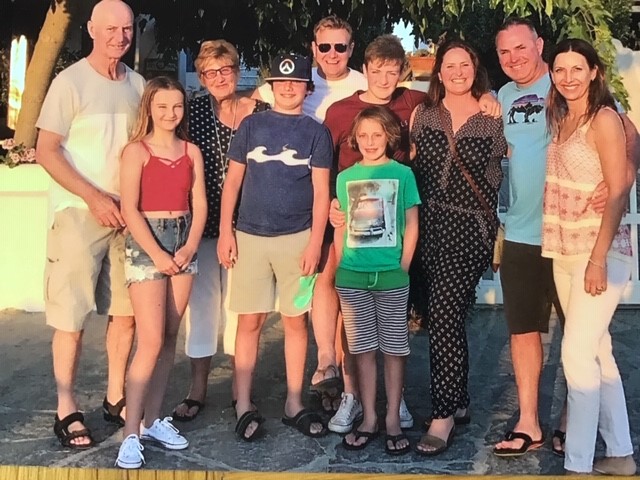 Huw has been my rock over the years and I’m so grateful for all he does. It was moving to celebrate our 50th wedding anniversary and by hosting a garden party to mark the occasion we raised more than £350 for the charity Brain Tumour Research. 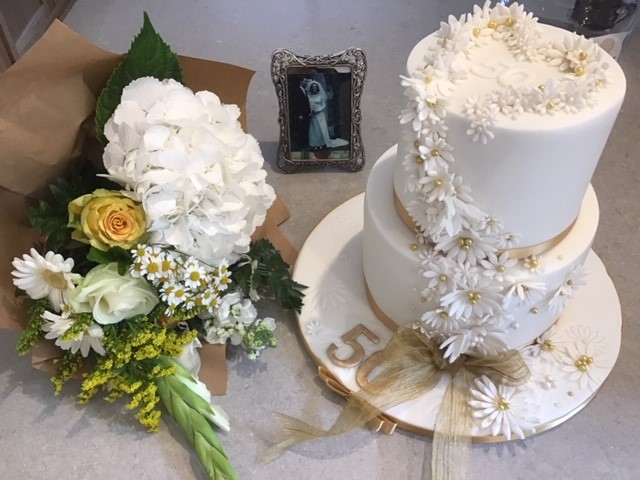 “Several members of the local community came along to celebrate with us and they’ve really helped me through as well. We live in Ystradgynlais, a small town in Powys where everybody knows each other; they always ask how I’m doing and it’s wonderful to have such a large support network around me.”

While I feel incredibly lucky to have survived two brain tumours, I’m left with permanent symptoms. My hearing loss never improved but, having been reluctant to the idea of hearing aids for several years, they’ve really helped me get by. The damage to my facial nerve caused by my debulking surgery 40 years ago is irreversible; my eyelid cannot fully open and my vision is affected. I’m hoping in future I’ll be able to have a procedure to improve this.

My artwork brings me so much joy and I’m thankful for this outlet. I have a scan coming up in October and while this can make me apprehensive, painting in my studio at the bottom of the garden helps to take my mind off things. 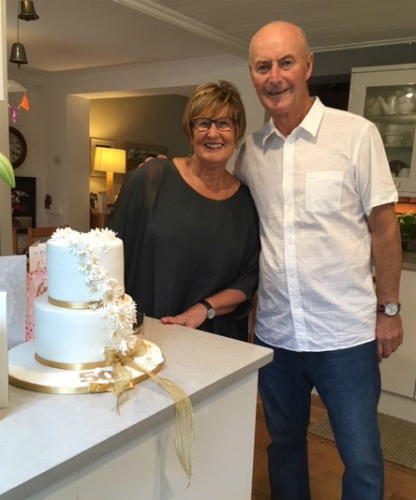