Andrew is a practising ordained Baptist Minister at Radstock Baptist Church in Somerset. He lives with his wife Suzanne and three daughters, Gracie, Tamzin and Amwyn.
I have travelled the world as a Merchant Navy deck officer and being fit and healthy was a requirement of the job – I had yearly medicals and looked after myself.  After being at sea for many years, I took a job as a general manager of a large marine company and started to get involved with the local church, eventually moving to Radstock in 2009, to be minister at the Baptist Church. Life was good, I had my family and a new career, and we were excited to be starting a new chapter in our lives.

In March 2011 I was helping my brother-in-law clear out some rubbish from a relative’s house.  It was an energetic day and on the surface it seemed I was well and full of energy.  I went to bed that evening as normal, but next thing I knew I woke up - covered in blood because I’d bitten my tongue - with paramedics leaning over me.  I thought they were burglars!  My wife had called an ambulance after my seizure started.  We were taken to Bath Royal Hospital’s A&E by ambulance in the early hours of Sunday morning.

Initially the A&E team thought I’d had a stroke.  I knew from my naval medical training that one of the tests for a stroke is looking at co-ordination, and mine was fine.  I had a feeling it wasn’t a stroke and eventually this proved to be the case. A CT scan and subsequent MRI showed a large black shape and shadow on my brain, which was then diagnosed as a tennis ball sized tumour. The doctors were mystified why I hadn’t had any previous symptoms.

The next few weeks were awful. I’d never heard of a brain tumour and I started looking on the internet and self-diagnosing. The unknown outcome was terrifying and my imagination went into overdrive, thinking through lots of scenarios.

I was being treated by Frenchay Brain Injury Rehabilitation Trust in Bristol where the registrar explained the tumour was very close to my speech and understanding sensors.

They did many scans and built up a digital 3D model of the tumour so they could understand its location in my brain.  Then they recommended they operate with a local anaesthetic, so I could talk to them as they operated.  Obviously this was a terrifying prospect but slightly made better by my understanding that there are no pain sensors in your brain – because no one is supposed to be in there!  They were hopeful that, given the size of the tumour, the indications were that it was slow growing and that they would be able to remove it all successfully.

My operation was on 16th  May, 2011.  I was terrified.  Friends and family came to the hospital and prayed throughout the five hours it took.

As I was awake I have strong memories of the operation.  I heard lots of noises as they sawed open my skull.  They told me I was going to be very scared and to swear and shout and do what I needed to do to get through it. As a minister I couldn’t very well swear, could I?   But I said the Lord’s Prayer over and over again.  The more frightened I was, the faster I said it.

The next part of the operation was medically extraordinary to experience.  I was asked to name pictures of things and spell words, and as soon as I made a mistake they knew they were getting too close to my speech and understanding sensors.  I remember it well – I spelt rabbit with one ‘b’ – then they paused, readjusted what they were doing and then carried on.

After a very short spell in intensive care and three days on a ward, I went home, having made a speedy recovery in a short space of time.

Before I went in for surgery, I was adamant that I wanted to be home and well enough in time to conduct my first wedding of a young couple I knew in the village. The reality was that I was well enough to even make the rehearsal, with my new six-inch scar, surprising everyone.

However, this was not the end of the rollercoaster. Ten days later, we were given the devastating news that the tumour was actually aggressive and not benign.  My diagnosis was that it was likely to grow back in one to two years. The bluntness of the outcome was brutal, a Grade III, astrocytic (astro – means star shape) tumour in my front lobe.

I underwent radiotherapy for six weeks and now have regular scans and I have lived beyond the two year milestone which was initially suggested.  My scans show no change, but it is hard to live normally.  For a while the whole family diary was arranged around my scans – we didn’t plan much or beyond three month blocks. I became quite depressed and took up the opportunity for counselling.

One day, while Suzanne and I were in a café, waiting for my scan results, I overheard someone saying they were running the marathon.  And I thought: “that’s it, we need something to look forward to and rally round”. This inspired the 100-mile walk I did over three days along the Kennet and Avon Canal between Bath and Hungerford, which raised £5,000 for Brain Tumour Research.  I put posters up along the walking route and received anonymous donations, which was very touching.

My next scan is 4th January 2014.  In the meantime I will carry on with life as best I can. I am thinking ahead to another fundraising event for my 40th next year.
The support we’ve had from the local community has been beyond amazing, especially as we were here less than a year before “Terry the Tumour” came into our lives.  People have been beyond supportive. Emma Welch, a 12 year old girl in my parish who was inspired by my brain tumour journey, undertook the most amazing feat to break the world record for an indoor climb of Everest in the autumn of 2013.  She raised a significant sum for Brain Tumour Research off the back of this.

A recent suggestion that the family make a connection with a local hospice was another frightening reminder of the magnitude of what we are dealing with but I try and find humour every day.  I joke about Terry the Tumour playing up, which gives me something on which to blame my shortcomings! But I can’t deny that life has changed – I can’t drive (having had to give up my licence following brain surgery) for example and we feel as if we are living with a life sentence.

We have a big painting on the wall at home, with the title “Fear Not”.  It is a bright yellow and blue abstract – a happy and cheerful image which my wife and I felt summed up where we are: fearful, but with God beside us. 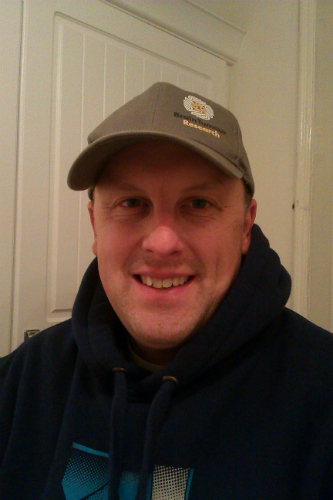