Andrew was just 27 when he was diagnosed with a high-grade anaplastic astrocytoma brain tumour. He underwent surgery and began chemotherapy but after four months he stopped the treatment and made significant changes to his diet. Five years on and Andrew has had no tumour growth, and is continuing to follow a restricted Palaeolithic ketogenic diet. His quality of life has drastically improved and he is dedicating his studies to research into the disease.

“Research into brain tumours is the only hope. We need more studies and clinical data, but in the meantime, I will continue to use myself as a human guinea pig. I know my cancer could come back at any time but if we understand more from a metabolic standpoint, then brain tumours can potentially become a condition we live with, rather than a disease we die from. It’s my passion and my dream and I desperately want to help others and help to shape the future in a positive way”

I was working on my Masters in nutritional therapy at Westminster University and happened to be travelling on a train after visiting the gym when I had a brain haemorrhage on 13th April 2013. I had a number of tonic clonic seizures which were quite dangerous and, as I came round, I realised I had been unconscious for quite a long time. It was a busy train and people around me were angry at the delay which had been caused. I was carried off on a stretcher and taken to St Peter’s Hospital, Chertsey.

I was in a lot of pain and didn’t really know what was going on. I felt as if someone had hit me over the head with a hammer, my tongue was in a mess where I had bitten it and I had bruises and other superficial injuries. It was a Friday and no MRI scans could take place over the weekend so I had a CT scan. The result showed what the doctors said was a cavernous haemangioma which is a cluster of abnormal blood vessels. I was told it was low grade, nothing to worry about, that surgery was possible but not necessarily needed and that I would have to live my life on medication to control seizures.

Despite the assurances that I should not worry, I knew things were more serious than I had been told. My symptoms were terrible; I had really bad headaches. I had learnt a bit about brain tumours at university but an MRI scan confirmed the diagnosis and I had a very confident neurosurgeon who told me to stop worrying.

There was an eight-month wait for surgery on the NHS and I was still having seizures and problems with migraines. Because I was able to access private health care I managed to get a date in May. The operation went ahead and, six weeks later, I had call and was told over the phone that a mistake had been made and that I actually had a malignant brain tumour which was incurable but could be treated. I couldn’t believe what I was being told and that there had been such a misdiagnosis. After the pathology report came through I had a meeting with the neurosurgeon who was very apologetic and said it had been a very unusual looking tumour.

The tumour was the size of a golf ball and was identified as a grade 3 anaplastic astrocytoma. It was situated between the temporal and frontal lobe in the middle of the areas of my brain controlling speech and movement. This explained why, before and after surgery, I had episodes where my speech would go completely. Fortunately, this has now been resolved.

I was told that the tumour had been removed although microscopic particles of disease remained and that I would be on medication to control epilepsy indefinitely. I was also told that I would need radiotherapy and chemotherapy, the latter for up to two years.

The chemotherapy started and I had problems with my short-term memory. In addition to this I was nauseous and so fatigued that I was bed-bound for months. I was taking so much medication for the epilepsy that I was having migraines. I asked a lot of questions about the chemotherapy: would it mean I would live longer and was it effective on my type of tumour? After being told it probably wouldn’t be effective, I decided to stop the treatment and take more control of my condition.

At the time I became ill, my mother Maureen was diagnosed with oesophageal cancer. She had a lot of problems with her radiotherapy and chemotherapy and also came off her treatment. Together we made high fat, low carbohydrate shakes and we both made dramatic improvements.

I continued working on my Masters at home, studying scientific papers and text books on cancer metabolism, nutrition and dietetics. I was very interested in the Palaeolithic ketogenic diet which is high-fat, adequate-protein and low-carbohydrate, forcing the body to burn fats rather than carbohydrates. I monitored the effect of the diet using Professor Thomas Seyfried’s ‘Glucose Ketone Index’. It was unconventional but it worked for me and five years later I have so much more energy. It’s been a long journey and I still have some improvements to make but I’m happy that I’m making progress.

For breakfast I typically have lambs’ brains with scrambled eggs and ghee. It is high in omega 3 fatty acids, which are anti-inflammatory, and a perfect ketogenic food. The lamb’s brain has all the components my brain needs to thrive but without the toxicity you can get in oily fish. My second meal of the day is often grass fed lamb heart. I also have some other type of organ meat, like liver, which is more nutrient-dense than many vegetables. This allowed me to have enough micronutrients which I would otherwise not get in my diet.

Kidneys, the pancreas and thymus gland are also part of my diet which all come from a local farm with high animal welfare standards and are supplied by my local butcher. In addition to this I eat oily fish, including sardines and mackerel, which are very high in essential fatty acids. I had some sensitivities to start with but recently I have been able to include broccoli, cauliflower, olives and avocado.

I also fast for mental clarity and for the therapeutic benefits, meaning I don’t eat for at least 16-18 hours after my final meal of the day and my diet is calorie restricted. I continue to be off all medication for the epilepsy, but if I am slack with my diet I can experience focal seizures. All in all, I’ve improved my quality of life and my diet has been effective for overall symptom control.

Initially the response I had from the medical establishment was not great but over the years I have been greatly encouraged as the diet and these metabolic approaches are starting to get a lot more attention and are being taken more seriously both clinically and amongst the general public. The Brain Tumour Research charity’s Centre of Excellence at Imperial College London has been researching the effects of the ketogenic diet on brain cancer for some years now with very interesting findings. I’m looking forward to hearing more updates from them in future.

My studies have been keeping me busy and I’m striving to make a difference. I’ve just completed a postgraduate ‘Mastering Lab Skills’ course at Imperial College London where I’m also in the middle of a focused project internship. I’m also working on an exciting project at the moment, understanding why aggressive brain tumours grow. I’m targeting the mitochondria – the parts of cells which produce energy – to stop the enzymes involved in helping the tumour to grow. My supervisor at university has been so supportive of me as she understands there is a great need for this type of research and it’s in an area that I believe is meaningful and translatable to the actual patient.

A few months ago, in July, we were informed that Mum’s cancer had spread to her colon and lymph nodes, with nodules in the lungs. Her prognosis is six months which is devastating but she’s using evidence-based, metabolic therapies that show promise, to have more time. She is doing remarkably well, considering. There are no guarantees, and of course, this is all experimental, but when the disease is incurable, you do all you can. If there is no benefit relating to the disease, at least her quality of life has benefitted and she won’t be spending her last months in pain.

Studying brain cancer biology is my passion and my dream and I desperately want to help others and help to shape the future in a positive way. Research into brain tumours is the only hope we have of beating the disease. We need more studies and clinical data, but in the meantime, I will continue to use myself as a human guinea pig. I know my cancer could come back at any time but if I can help us understand more from a metabolic standpoint, then brain tumours can potentially become a condition we live with, rather than a disease we die from. 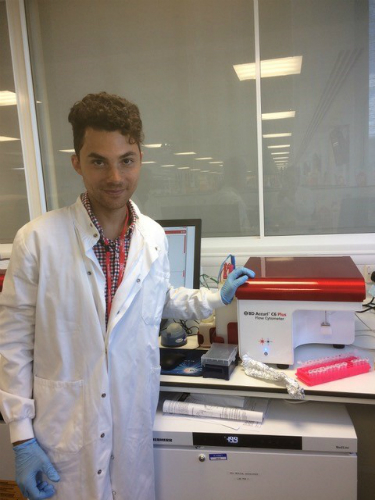