Since Ali was diagnosed with a brain tumour and epilepsy in April 2005, she has faced life with a smile despite the ups-and-downs of her illness. Having a great support network around her – in particular her dog Harry, who was able to sense the onset of her seizures – she has taken everything in her stride. Now she has participated in an indoor skydive to help fund research into the disease.

“The 13 years that have passed since my diagnosis have been full of ups-and-downs but I am determined to beat each challenge and keep living my life to the full. I’m in a battle with my tumour and choose to use positive mental attitude, good humour and determination to keep on smiling.”

My first seizure was on 3rd April 2005, at the age of 22, I was on a dog walk with my Pa, Peter, when a fly flew into my eye. Naturally, I jolted my head back; this moved a mass in my head – a tumour, which had not yet been diagnosed – and so triggered my first seizure. I was rushed to hospital.

I had a biopsy on the 12th April 2005, this revealed that I had a type of brain tumour known as an oligodendroma. I prefer to call my tumour ‘Ollie’. Ollie and the epilepsy were diagnosed and what followed were several years of tiring and debilitating seizures.

The first year after my diagnosis was very hard; I was working as a private Nanny at the time. I’d worked with the same four children for a number of years and found the loss of my job very hard.

Ollie didn’t make my life very easy at all. My family were understandably very shocked. I have three brothers, Ian, Jonny and Joe, who are a similar age to me, and it’s hard to imagine what they were feeling, as I had a lot of strong emotions myself.

After my diagnosis, I wallowed for about eight to nine months. When I wasn’t having a seizure, I remember feeling guilty about what my family would be feeling. I was sad I didn’t have a chance to say goodbye to some of the children I worked with. I so desperately wanted to go back in time and continue my life as normal.

Alongside the emotional turbulence I felt at this time, I also have a deep fear of needles – a particularly unfortunate phobia for a brain tumour patient. This made medical procedures all the more impactful, and, even now, every blood test or MRI is nerve racking.

The epilepsy itself also had a terrible effect on my life. Due to the frequency of my seizures, which happened up to 16 times a day, I felt like I wasn’t really myself. I was getting quite confused. On top of this, I had to go through a lot of drug changes in order for the professionals to determine which ones were most efficacious and at which particular dose. This took a long time, a good couple of years.

Fortunately, throughout this period, I was blessed to have a canine companion. My dog Harry, a springer spaniel, who was an impulse buy in 2001, was the best thing that could have happened to me. Somehow, he sensed when I was going to have a seizure; about 30 seconds before it began, he would tug at my clothes and, immediately, I knew to lie down. Every time I would come round to him licking my hand.

Over the passing years, I learned to adjust to a new norm. Things remained relatively stable, until Ollie decided to be a nuisance again and began to grow in 2008. After this, I had eight months of chemotherapy which shrunk him by 10% and I got back on my feet and even got my driving licence back.

Since 2014, I have been successfully medicated for my epilepsy, thankfully putting an end to my seizures. However, my MRI scan in December 2014 showed that Ollie had grown again. Following on from this, I had an awake craniotomy at the John Radcliffe hospital in Oxford in May 2015. I remain being astounded by the quality of treatment and the excellence of the facilities they could offer. While 60% of the tumour was removed, I was left with several side effects from the surgery, including numbness on my right-hand side, which I had to re-train how to use with physiotherapy.

I was grateful to have a lot of support at this time, especially from my best friend, my Pa and my brothers, who would give me no peace. One of them would visit me every day.  Also, my neighbour, Jill, would demand I returned to bed if she saw me running errands, such as taking the bins out.

I was just getting back on my now wobbly feet – when Ollie struck again in October 2016.  Once more, on the back of another disappointing scan, I went through the ordeal of radiotherapy and chemotherapy – and all the delights that go with that – in 2017.

The treatment was tough and I had a lot of sleepless nights. While my memory was affected by the radiotherapy, it was the chemotherapy that was particularly hideous. You feel lots of side effect, sickness: vomiting; constipation; even your teeth are affected when your mouth begins to bleed.

Having radiotherapy over the Christmas of 2016 wasn’t fun. The only days I was allowed to have off from my treatment were Christmas Day and Boxing day, but this provided little respite as I had to make up for it with more treatment the next weekend.

Still, I knew I had to muster the energy to get on with things. You have to keep going, the last thing I would want is for Ollie to dictate the way I live my life. When I do struggle, I think of my family. I am determined to win.

Though I try to remain positive in my outlook on things, there are consequences of the disease that I don’t always have control over. The worst part of having a brain tumour is not being able to drive. I think a lot of patients with the disease would agree with me, as this loss of independence is really tough. Recently, I have applied for a new licence and this is currently being considered by the DVLA.

My three brothers have been incredibly supportive over the years, as has my father, Peter. I am so grateful for my family, friends and pets who have helped me through, and, though I miss my dog Harry, who passed away in December 2013, I now live with two lovely cats and spend time with my dad’s dog, Tess. The 13 years that have passed since my diagnosis have been full of ups-and-downs but I am determined to beat each challenge and keep living my life to the full.

I was privileged to take part in an indoor skydive to raise money for the Brain Tumour Research charity in June 2018. This crazy and very last-minute moment of spontaneity is the closest I’ll get to a real skydive; I was expecting the doctors to say no to me taking part in such fundraising events, for precautionary measures, but they said yes!

I’m fully aware that there are others with tumours far worse than mine and many of them will be children. I’m in a battle with Ollie and use positive mental attitude, good humour and determination to keep on smiling. 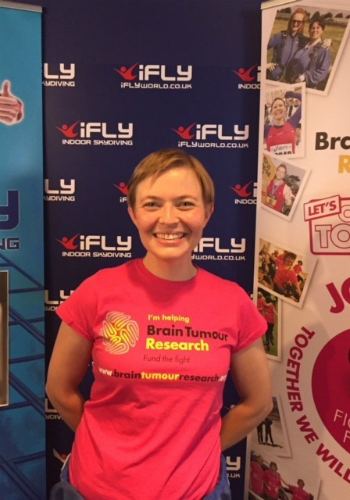