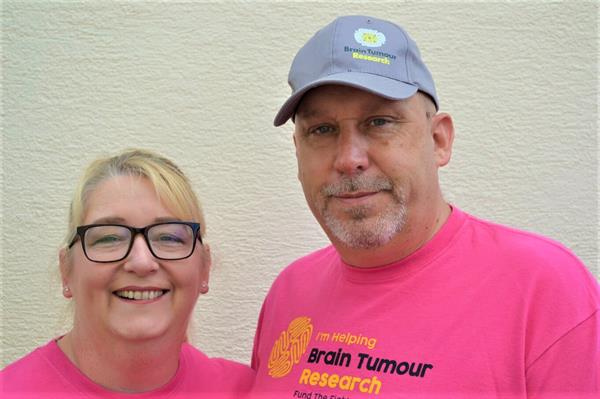 A wife hit by the devastation of a brain tumour diagnosis has welcomed a new report exposing the punishing financial burden of the disease.

Jim Murray, 51, of Bridgwater, has served with the Avon and Somerset Constabulary for nearly 20 years but, just after Christmas last year, he was diagnosed with an aggressive and incurable brain tumour. Now he and his wife Ally face even more worry through the financial impact of his disease, as Jim has been on sick leave since his diagnosis and has had to surrender his driving licence. There is also the ongoing cost of travelling to and from hospital appointments and high travel insurance premiums.

Ally said: “Jim’s tumour is a grade four glioblastoma multiforme (GBM) which brings with it the incredibly bleak prognosis of just 12 - 18 months. It seems so unfair to think that Jim, who has spent the last 18 years as a police officer with Avon and Somerset Police on top of many years’ service with the RAF, should be dealt such a cruel blow.

“Jim’s driving license fell victim to his diagnosis so he can no longer drive, so we face travel expenses to make hospital appointments. He hopes to get back to work but his eyesight is no longer good enough for him to do any frontline policing. Fortunately, our income hasn’t been too badly affected but there are many other families affected by a brain tumour that aren’t so fortunate, and whose lives are under constant financial pressure.”

Since his diagnosis, Canoeing for a Cure, a Fundraising Group under the umbrella of the Brain Tumour Research charity, has been set-up in Jim’s name.